In a revamped format, Portfolio Doctor will examine more patients in every issue.We start with three who like to play safe — even though they shouldn’t. 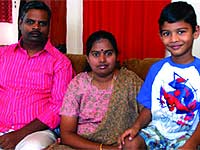 Bala Krishnan (with wife and son)
Click here to Enlarge

Yes, we have become bigger—instead of one, we will now analyse three to five financial plans simultaneously. Yes, this means more readers will get a chance to put their balance sheets in order. No, unfortunately, this still doesn’t mean that each request will be entertained.

But greater variety means higher chances that you will relate to some financial conundrum and learn of possible solutions. The usual caveat holds: don’t follow any advice blindly, as your financial situation will definitely be different from the reference cases.

We decided to kick off version 2.0 with the upwardly mobile generation, which follows only one rule: make money, fast. Such a mantra seems to invite debt traps and humungous losses. Surprisingly though, our three patients— Dipankar Patnaik (32), Bala Krishnan (36) and Abhishek Bharti (29)—are neither reckless nor capricious. Swearing by the convenience and relative safety of mutual funds, the trio has so far steered clear of buying stocks. Neither is any of them heavily mortgaged. So what’s there to recommend changes in their financial portfolios?

For one, their fascination for savings bank accounts. A manager in a Chennai-based BPO, Krishnan has salted away Rs 1.2 lakh in this instrument. Hyderabad-based Patnaik, also a manager in a financial services BPO, has Rs 3-4 lakh in a bank account. Bharti, a Major in the army, recently received his salary arrears of about Rs 70,000 and used it to buy gold. Hopefully, he will invest the Rs 1.05 lakh that he is yet to receive in a similar manner. Do the other two realise that their money is depreciating in value in a bank account?

Apparently they do, but have been either too busy or too lazy to do anything about it. Patnaik got married in February this year and had stowed away “handy cash” for unforeseen expenses. “This is one expense that you can never predict accurately,” he says. He has a point, but it has been six months since his wedding. What is he waiting for?

After a few “umms” and “uhhhs” comes the “aha” moment: “I really don’t know. I should have invested it by now.” Krishnan too has no reason for salting away huge sums of money in a bank.

Our advice to them is to invest. The savings account is exactly for that—saving. Use it to park some handy cash but nothing more. In fact, you should consider other instruments like a sweep-in account even for creating an emergency corpus as the returns are higher than that from a savings account.

When it comes to loans, the Americans can learn a thing or two from these young men. At home, the cynical oldies can eat their words about how careless their successors are. Patnaik has no loans. Bharti has bought a joint property along with his father, who pays the majority of the home loan EMI of Rs 15,000. Krishnan first sought loans from his family and friends before approaching a bank. Solely from the budgeting angle, Krishnan’s personal loan EMI of Rs 8,250 is not desirable as the cash flow is very tight. “I don’t like loans, but couldn’t escape this one as the expenses of renovating my two-bedroom apartment overshot the budget,” he explains. As the loan rate (13.5%) is high and more than what his debt instruments are likely to earn, we suggest that he withdraw money from his provident fund and the National Savings Certificate scheme to prepay the outstanding loan of Rs 3 lakh. But he must speedily replenish the deficit in his debt portfolio, which will be all but wiped out by this move. It is imperative that he use this amount only if he is sure of replacing it. The prepayment of the loan will increase his monthly surplus to Rs 15,438. He can either use the entire amount to rebuild the debt cushion or divide the surplus between equities and debt.

To see term plans in all three portfolios was a pleasant surprise as it hasn’t been a favourite with our past patients. Another commonality is the padding up of covers with Ulips. This is a good strategy, but to derive optimal benefit, it would help if they understood Ulips. For instance, Bharti is unaware of the sum assured or the minimum maturity amount of the three Ulips that he has bought. As he is in the army, his insurance is taken care of, otherwise this information would have have been essential to evaluate Bharti’s life cover. He could take a lesson or two from Krishnan, who is aware of the costs, surrender value, debt to equity ratio and other details about his Ulips.

Iris says that across all portfolios, the monthly or annual premiums for the pension plans are very low, and hence, not cost-effective. Patnaik, Krishnan and Bharti should increase their premiums to about Rs 10,000 a month so that absolute costs do not constitute 3-4% of the investment. In case this is not possible because of cash flow constraints, they must try to increase these over the years.

To do so, Iris recommends topping up the plans as a greater proportion of the premium will be allocated to investment. It is also a good idea to call up agents, find out the number of free switches and the asset allocation of Ulips to align these with the overall portfolio.

Before we shift to the analysis of asset allocation, a quick word about endowment and money-back plans. If you have a term plan and a few Ulips in your basket, these policies may be redundant, irrespectove of the fact that the product is advertised as manna from heaven. “In 2000, after marriage, I bought an endowment plan (cover of Rs 25,000) because my father recommended it. Now I regret not investing more in the product,” says Krishnan. However, a premium of Rs 1,440 for a Rs 25,000 sum assured is not cheap. If he wanted insurance, a term plan with this premium would have covered him for about Rs 6 lakh. So expensive endowment and money-back policies must go from each portfolio, unless their maturity dates fall within the next three years. Though these three are calculated risk-takers, they don’t seem to trust their strategies as the total investment in equities is a very low percentage of their portfolios. If we include his home, Krishnan has invested barely 5% of his portfolio in equities. Bharti is worse at only 1%. The best in this respect is Patnaik, with 51% allocated to equities. To be fair though, this is chiefly because he has not purchased a house yet.

For both Krishnan and Bharti, the low equity exposure is because they did not earn too well initially. “I was averse to risk and wanted to invest whatever I could in safe instruments,” says Bharti candidly. Fair enough, but if he wants a decent growth rate he must learn to stomach higher risk. Bharti’s wife, Vanita, is a sonologist, who plans to start her own practice by next year. This will increase the couple’s combined take-home salary and should enable them to invest in equities.

This does not necessarily mean stocks. Krishnan has opened a trading account and plans to plunge into direct equity soon. “I am waiting till I understand how things work. Then I plan to start with a small corpus of Rs 50,000,” he says. There is nothing wrong with this approach. We suggest that he start by benchmarking his stock portfolio with an index. In case he is not able to beat the index, or even remain at par, he should exit direct equity.

Bharti and Patnaik have let others (read fund managers) lose sleep over market fluctuations. Patnaik puts this philosophy in perspective: “I don’t have the time and am not confident about my stock-picking skills. Give me a reason why I should try.” We have a pile of reasons why he shouldn’t, so there’s nothing more to say.

As stocks are out, it is essential that the chief accelerators of growth, mutual funds, do their job well. Iris commends all three for maintaining a ‘sober’ collection of funds. In fact, Bharti has got it absolutely right in terms of selection too. Ironically, he has invested in just one mutual fund: Birla Sun Life Frontlife Equity. Iris suggests that he increase his SIP of Rs 1,000 in it. For saving tax, he can choose between consistent performers, such as HDFC Taxsaver and Magnum Taxgain. The funds may seem too few, but this is in keeping with the overall size of Bharti’s portfolio.

Following up on Iris’ revelation that a premium of at least Rs 10,000 makes a Ulip cost-effective, Bharti can increase the SIP in SBI Life Horizon. With a monthly surplus of Rs 24,700, this strategy should be easy to adopt. As far as the debt cushion is concerned, he has portioned out an impressive Rs 15,000 in the Defence Service Officers’ Provident Fund. Krishnan’s choice of SBI Magnum Taxgain, HDFC Taxsaver and Fidelity Equity is good. Iris thinks he should move beyond ELSS and start an SIP in either Franklin India Flexicap, ICICI Pru Dynamic or the Benchmark CNX 200 index fund.

Patnaik’s bouquet has the maximum number (10) of funds and requires the most changes. Iris has retained only DSP BR Opportunities, HDFC Equity, HDFC Taxsaver and SBI Magnum Taxgain. The funds that tend to repeat exposure to the same stocks or have similar functions, such as tax saving, have been rooted out to make the fund kitty more manageable. So Sundaram Taxsaver and Principal Taxsaver must go along with midcap funds like Sundaram Select Mid Cap and Reliance Growth. The funds that have a narrow universe, such as Magnum Contra and Reliance Vision, have also been shown the door because they take on unnecessary risk.

Scared by market volatility, Patnaik had not renewed his SIPs last year and has not made a single equity investment in 2009. “Now that the market is above the 6,000 level, I regret my decision,” he says. It’s a good idea not to exit the markets when they are low as it finalises the losses that could have been recovered in the long run. Bharti has similar sentiments about gold, which “has given good returns unlike my equity investments”. We recommend it only as a diversification tool as gold is more of a wealth preserver than a wealth creator.

As already mentioned, all three have started investing for a retirement nest egg at an early age, which is a good thing. Bharti need not worry about it as he is eligible for a handsome pension and the medical expenses of his family will also be subsidised. The other two are not so lucky.

Iris estimates that Patnaik would need a massive retirement corpus of about Rs 5.7 crore, but the monthly investment of Rs 13,051 is not so intimidating because of the early bird advantage. Krishnan left it to us to determine how much he would need. Iris thinks Rs 2 crore should suffice, for which the monthly investment of Rs 16,694 is not so difficult. The suggestion to both regarding medical insurance is not to depend on their employers because it’s not a long-term relationship. A family floater health policy of Rs 5 lakh is a good idea.

The theory is possibly the easiest part of a financial strategy. The pain comes when you have to exit a fund that is in the red or forego an instalment of your insurance premium. If you face such a quandary, go by the opportunity cost philosophy. If today’s pain is tomorrow’s gain, then it’s better to bear it. Exit that insurance policy or the stock that never goes up and buy a painkiller to get over the immediate loss.