By taking risk in their pre-retirement years, our three patients have turned conventional financial wisdom on its head. Surprisingly, it works for them.

Given the remarkable self-assurance with which they discuss their plans for the future and the keenness to take on risk to execute them, who would say these are men in their 50s, just a few years away from retirement?

Bokaro-based Ashok Jaiswal, 55, wants to sell his dealership of electrical devices. A commanding officer in the army, Sanjay Puranik, 52, is making plans for a world trip, a lifelong fantasy. Nilesh Doshi, 50, is a doctor working in Kathmandu and doesn’t have to retire if he so wishes. He is, however, adamant that we make a plan which allows him to stop working at the age of 65. “Who knows what I will want to do then,” Doshi explains.

Talking to the three men, it seems a world of possibilities awaits them after they hang up their boots. The catch is, these come with a price tag. So squirrelling away funds to meet regular expenses is no longer enough. Now, the retirement corpus must be large enough to provide for coffee at a Parisian cafe and monthly flights to meet children settled abroad. This is where the financial plans of Jaiswal, Puranik and Doshi might fall short. All three have been diligent savers during their working years even though they were introduced to equities quite late. The current period, their fifties, is the make or break time as it gives them the final opportunity to accelerate growth, mitigate risk or indulge in fine-tuning.

Let’s start with an overview of their goals and debt status. Doshi is still saving for his son’s marriage, which will drain his corpus by Rs 9 lakh when he is 60 years old. Puranik will have to shell out about Rs 5.6 lakh in another two years to meet the wedding expenses of his daughter. Jaiswal has already met the goals of educating and marrying his daughter. However, he has bigger worries in the shape of a house he wants to construct after three years, which will cost Rs 1.19 crore. More importantly, it will begin just when his retirement starts.

We would have preferred the goals to be linked only to the retirement corpus. Even if this is not so, the objectives are achievable as long as the three do not dip into their retirement nest eggs for meeting other goals.

Puranik has reason to worry. If he withdraws money from his current corpus to fund his daughter’s wedding, it will almost wipe out his debt investments in fixed deposits and provident fund, which total Rs 6.5 lakh. Alternatively, Iris suggests that he put away Rs 20,623 every month to accumulate the amount. Given the short investment horizon, this is risky. Plus, it means that 88% of his current monthly surplus of Rs 23,433 will be used up by just one goal. Therefore, Puranik should opt for a combination of fresh investments and withdrawals from his corpus.

Doshi has a decade in hand and can safely rely on new investments to put together Rs 9 lakh for his son’s wedding. The monthly investment required, Rs 3,669, is relatively small and doesn’t eat into his surplus of Rs 17,478.

The situation is grimmer for Jaiswal. The target of Rs 1.19 crore for building a house is high per se, but it seems colossal when the time period is just three years. Along with his wife Saroj, he has sizeable financial assets totalling about Rs 49 lakh. But the amount seems puny for this goal.

One option is to sell his other properties to raise the money, but property swapping is tedious. The other way out is to postpone the goal and grab a few more years of saving to minimise the loan amount. The problem is that it pushes an expensive goal way into his retirement years. A simple solution would be that Jaiswal postpone his plans to sell his business in the next seven years. The final choice has to be made by him. We only suggest that he doesn’t burden his finances with heavy loans during retirement.

This brings us to the pre-existing loans of the to-be retirees. Puranik recently foreclosed his home loan with arrears of about Rs 2.5 lakh. He is still repaying a car loan, for which the EMI is a reasonable Rs 4,300. The rate of interest, 12%, is higher than that earned by his debt investments, but unless he is expecting to invest this money in equities and receive higher returns, we suggest that he let the EMI be. Remember, he needs his FDs and provident fund for his daughter’s wedding.

Jaiswal’s debt condition is hardly rule book perfect. For one, he is repaying a home loan, which has a hefty EMI of Rs 35,000 and three more years to go. After that, the Jaiswal couple will start paying an EMI of nearly Rs 40,000 each for five years for their two apartments in Kolkata.

This is taking the aggressive stance a little too far. As the apartments have already been booked, the faux pas cannot be reversed unless the couple can successfully negotiate a way out with the developers. If they don’t, it looks like they are in for five years of very austere living. Thankfully, Doshi has no loans and has no plans to take any.

Limiting the outgo during the pre-retirement years is important, but the key to staying flush after stopping work is to ensure an alternative, reliable source of income. On this count, Puranik and Jaiswal have done in-depth planning (Doshi needs no alternative career).

When Puranik retires after four years, he will be eligible for a pension almost equal to his last drawn salary. In addition, he is expecting a lump sum of Rs 45 lakh that will beef up his portfolio. Of this, Iris suggests that he invest about Rs 10 lakh in bonds and debentures like the recent one from Larsen & Toubro, which offers assured returns of 10.25%. The rest should be invested in monthly income plans and balanced funds such as HDFC Prudence.

Puranik knew that pension would make his retirement comfortable. But as we have said earlier, he was planning for much more. So he invested in three properties. The first apartment, bought in Pune in 1993, has appreciated in value to touch Rs 20 lakh. In 1997, he bought another apartment in Nashik worth Rs 14 lakh, so as not to disturb his daughter’s schooling while he was posted in different field areas. Finally, in 2002, he bought his retirement abode, an apartment in Aurangabad, for about Rs 35 lakh. “I believe property is very secure. Also, the rental income from these apartments will supplement my pension,” he explains. 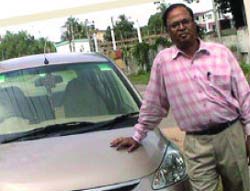 Going by Puranik’s strategy, it seems one can’t go wrong with property. Then again, like Jaiswal, you can mess up a simple plan by taking on more than you can chew. He has three apartments in his kitty and two more are to be added soon. These are apart from the house he wants to construct. Jaiswal does not seem to realise that big-ticket commitments like home loans can sap other investments very fast and ruin his dream retirement.

Instead of enjoying the income from so many properties, he will end up juggling them to get rid of the loans. Our advice is that he identify the properties that are likely to or have already given him good returns and exit the others. An important caveat: these problems can be sorted if Jaiswal gets a hefty sum when he hands over his business. Our patients should understand that the strategies we suggest need to be tweaked according to such events, which we have no way of predicting.

The scope for flexibility in financial plans increases for people like Doshi who have the option of not retiring. Given his insistence on doing so, Iris figured that maintaining his current lifestyle requires a nest egg of Rs 86 lakh. To build this corpus, he must invest about Rs 12,000 in equity mutual funds for 15 years. There is no need to panic. After investing for his son’s wedding, Doshi has a surplus of Rs 13,809, which is more than sufficient to meet his goal.

Having fixed their overall strategies, it is time to select the products. For the young at heart, nothing beats equities for excellent returns. Our instrument of choice: the relatively safe large-cap mutual funds. Doshi has invested in a good combination of HDFC Top 200 and Magnum Taxgain. Iris suggests that he increase his exposure to the first fund through an SIP. The third fund in his list, Reliance Regular Savings, has a small corpus, so Iris thinks it is best to stay away.

Puranik’s selection of funds is not as good. He has no equity diversified fund in his portfolio, which is a glaring mistake. Instead, he is betting on sector funds like SBI Infrastructure. Iris suggests he exit the fund immediately and distribute investments in HDFC Equity, DSP BR Top 100 and HDFC Prudence. He can opt for an SIP of Rs 5,000 in Reliance Growth, a mid-cap fund that will add zing to his portfolio. Investing in the JM Liquid fund is not a good idea as such funds are meant to park money only for a few weeks.

Jaiswal’s collection of 15 funds requires a major overhaul. Iris has booted out exotic funds like ICICI Pru Indo Asia Equity, ICICI Pru Emerging Star, Sundaram Paribas Leadership, sector funds like ICICI Pru Services Industries and mid-cap funds such as the Sundaram Select Midcap, as these pose a high risk. Reliance Long-Term Equity has been shown the door because it has performed dismally in the past few years. Iris suggests that Jaiswal keep it simple with the equity diversified funds already in his portfolio.

Regarding direct equity, Puranik is yet to demonstrate the skills he claims to have developed in the past few years. “Initially, I followed the chimpanzee strategy of emulating others. Now, I choose the stocks myself after a proper analysis,” he says. As of now, his basket, comprising stocks like Infosys, Micro Ink, Moser Baer, etc, does not reveal any investing pattern.

Though Puranik can experiment with a stock portfolio (not too large in value), Iris suggests that Jaiswal exit stocks for good. His collection of nine scrips reveals no method at all. Doshi has a more evolved collection, but the problem lies in wrong proportions. Larsen & Toubro commands 20% of his total portfolio value, which is too high. There are at least eight stocks which have a value of less than 1%. Iris suggests that he exit these stocks immediately and consider a power sector stock like PowerGrid, as this sector is missing from his portfolio.

Usually, life insurance is not a problem at this age but the spouses of Puranik and Doshi will be dependent on them after retirement too. Puranik is covered sufficiently by the army. Doshi has a collection of eight traditional policies which cover him for Rs 21.5 lakh. The annual premium is a whopping Rs 1.38 lakh. We would have suggested that he surrender these policies and take a term plan of Rs 20 lakh, but at his age it will be more costly. So he can continue with the current set of policies. Jaiswal need not worry as he has an endowment plan that covers him for Rs 60 lakh. More importantly, all three must ensure that they have health insurance policies that cover them and their spouses as medical expenses seem to be on an upward curve.

Finally, though we fully back the hunger for higher returns, it can be addictive. So these three should not fret about it too much. The running can be slow when the destination is so near.