A label for our times

Check out a new website that promises to revolutionise music downloads.

When the English Band Radiohead decided to give away its seventh album, In Rainbows, for free on the internet, it sent seismic shockwaves through the music industry. Already reeling from a slowdown and declining record sales, Radiohead’s decision only made it painfully clear to behemoths like EMI, Capitol, WMG and Sony BMG that a lot of people the world over will rather get recorded music for free off the net than buy it off the shelves.

Fast on the heels of the free In Rainbows, a new independent record label-cum-blog came up online, smartly called www.rcrdlbl.com. Set up by blogger and journalist Peter Rojas (founder of the well-respected Endgadget and Gizmodo blogs) in a joint venture with Downtown Records, RCRDLBL launched on November 15, 2007, as the first website on which you can legally download music for free. The website makes its money through advertising—it has signed sponsorship deals with Virgin America airline, Nikon Corporation and PPR’s Puma AG sneaker unit.

The artists earn through advances for each song that they give to the label. This varies with the status of the band and bigger artistes make more money than lesser known ones. 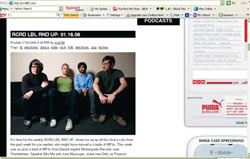 Free on the Internet
However, this experiment would not have worked without some sort of contact with the industry. This was provided by independent label Downtown Records, some of whose artistes like Gnarls Barkley, Cold War Kids and Bloc Party, scored big mainstream successes in 2007.

So, what’s the buzz with this hybrid blog and record label? It’s the first of its kind to offer free music using DRMfree software (see What is DRM?). Basically, this means that you can download tracks as layer MP3 files and do whatever you want with them.

RCRDLBL has also tied up with other sought after indie labels like Warp, Drowned in Sound, Ed Banger and Kompakt, which makes it easier to access the music of the various artists affiliated to these labels. Apart from this, the website has embedded applications called “widgets” that can be used to stream music, videos and view photos. These can be downloaded, and whenever any new content is added to them, your downloaded “widget” gets automatically updated.

Recording artistes have long been hosting some of their music online— mostly non-album tracks—and in some cases, like Radiohead, The Charlatans and Carbon/Silicon, giving tracks away for free. But what sets RCRDLBL apart is the sheer number of artistes represented. RCRDLBL represents mostly unknowns (or about-to-be-very well-knowns) and a handful of artistes who have successfully crossed over to the mainstream (see BT More Music review). You don’t need to have an account with the website to download music, but you can register and customise your navigation. Standard applications like RSS feeds are present on every page.