Developers are becoming savvy about brands. In a bid to boost the value of their properties, they are tying up with brands such as Disney, Swarovski and Armani. Investing in such projects is not a bad idea.

PHOTO: Reuters
Pritam P Hans
Developers are becoming savvy about brands. In a bid to boost the value of their properties, they are tying up with brands such as Disney, Swarovski and Armani. But the question is, are such co-branded properties a good investment option?

In this time of slowing economy and stagnant sales, developers are trying to attract buyers by offering exclusivity, latest designs and international experience. This is especially true in the high-end segment. Over the past couple of years, there has been a visible increase in the number of projects with brand-tieups as their unique selling proposition, even beyond the metros.

"During 2007 to 2011, only seven branded projects were launched, and that too in Pune and Mumbai. The next year, there were 11 such launches, in Pune, Mumbai, the National Capital Region (NCR) and Bangalore," says Shveta Jain, executive director (residential services), Cushman & Wakefield India, a property advisory

"This year, at least three such projects have been launched. There have been announcements for many more. Pune leads the list with 11, followed by Mumbai (8) and the NCR (6)," says Jain.

100%
can be the premium that branded properties command over non-branded ones. At the lower end, such homes are at least 5% pricier.

For instance, Pune-based Panchshil Realty has associated with US-based realtor Trump Organization for Trump Towers. This has given the Indian developer access to Trump's designs.

"Unique branding ideas with theme-based exteriors, international-level sports amenities and resortlike facilities add to the sense of ownership and pride in buyers," says Jain of C&W.

In the high-end segment, endorsements by big brands add to the recall value and, of course, premium.

"For developers, the clear edge is in product differentiation. By doing this, they are able to command a premium. The tieup also h e l p s them create a buzz about their projects," says Aditya Verma, executive vice president and chief operating officer, Makaan.com, a property classifieds website.

For builders, these tie-ups are an attempt to capitalise on the growing aspirations of prospective buyers who want enhanced luxury experience and unique lifestyle.

"If a developer can identify his audience and its aspirations and is able to fulfill them through a tie-up with a big brand, he will command a premium for his product," says Verma.

Developers bring in reputed architects (often with international acclaim) for designing and landscaping their building. Sometimes, the project is designed in collaboration with big designer brands.

The Armani company has also designed New Delhi-based Supertech's Supernova, a mixed-use project in Noida, a suburb of New Delhi. Pune-based Panchshil Realty has partnered with French designer Phillipe Starck for YooPune, a project under the brand name 'Yoo'. The famous Disney cartoon characters have been used for branding of a Sunteck Realty project in Goregaon, Mumbai (2012), as well as Supertech's Fable Castle project at Yamuna Expressway, Greater Noida (2013).

Swarovski Crystal has tied up with Pune-based City Corporation. Under the deal, it will do interior designing for Gateway Towers, a luxury housing project in the city.

Apart from famous designers and brands, developers are also collaborating with celebrities for interior designing. For instance, former Bollywood actress Twinkle Khanna has designed interiors of the ORB project in Supertech's Cape Town Township in Noida. She has also designed Panchshil Realty's One North project in Pune.

Many national and international celebrities are also endorsing realty companies and projects. For instance, cricketer Sachin Tendulkar and Bollywood actress Deepika Padukone are brand ambassadors for Amit Enterprises and SKYi Group (both from Pune), respectively. 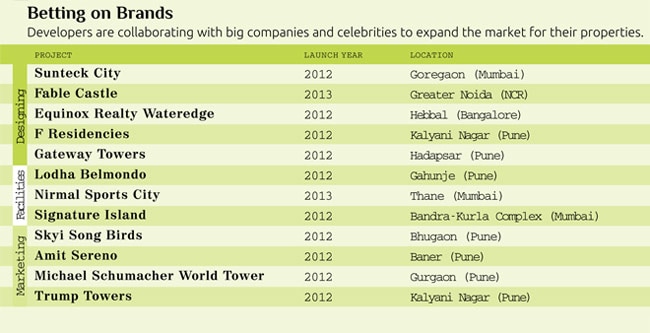 Such tie-ups are not limited to design. Builders are also tying up with international organisations to provide certified amenities.

Sports is high on the list of exclusive facilities. Nirmal, a Mumbai-based developer, has launched a sports city in its Thane project. The city has sports facilities approved by reputed sports organisations such as the US Open for tennis courts and FINA (Federation Internationale De Natation, the international body that governs swimming and related sports) for swimming pools.

"Providing sports facilities of international standards attracts people who are conscious about fitness and leisure activities and want a differentiated product," says Jain of Cushman & Wakefield.

Some such deals involve management of apartments and concierge services. Then there are technology tie-ups for offering a world-class living experience.

Prospective customers find projects with big brands attached to them attractive. But exclusivity comes at a price. These projects are pricier than the non-branded ones.

"While the premium differs from project to project, there is a price difference of 5-25% between branded and other projects in the same location, depending upon the brand and location," says Jain of C&W.

Verma of Makaan.com puts the premium even higher. "The premium ranges from 20% to 100% depending upon the width and depth of the tie-up and the value of the associated product," he says.

Paying a premium for such projects might not be a bad idea. If the project has been executed well, association with a brand will help investors sell the property in the resale market quite easily and at a premium, say experts. "The premium positioning of branded projects with unique amenities can be leveraged during resale," says Jain.

"This (brand tie-ups) is a new phenomenon in the Indian market. So there is excitement (right now). However, if this spreads and many more such projects come up, the only differentiator in the long run will be execution," says Verma.