Until the real estate regulator becomes a reality, buying property remains a risky task. Buyers often find themselves stuck with properties that are on the wrong side of law or paying for things they don't need.

Pritam P Hans
India's real estate industry is notorious for lack of transparency. Buyers often find themselves locked into defective properties or paying for things they don't need. Worse, they might be shelling out more to fund fines levied on builders. To tackle the problems, the government is planning to set up a regulator, with a Bill on this already cleared by the Union cabinet.

Until the regulator becomes a reality, buying property remains a risky task. Buyers often find themselves stuck with properties that are on the wrong side of law or paying for things they don't need. To avoid this, knowledge of common tricks property developers use can come in handy.

All constructions in the country have to be done according to the National Building Code. Though all good developers get their plans cleared by the authorities, some do not strictly adhere to them.

"In most cases, the building is not built according to the plan submitted to the governing body. The violations range from the height of the building to margins (open spaces)," says Vikas Malpani, co-founder and vice president (communities), CommonFloor.com, a real estate portal.

"In some cases, builders think that even if they violate rules, their buildings will be regularised by urban local bodies," he says. 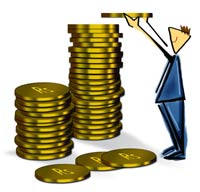 Recreational clubs and other amenities such as gymnasiums can be another issue as buyers have no option but to pay for these. "Buyers are usually not given the option to not buy club membership and other amenities. Legally, it should not be done, but it has become a common practice these days," says Singh.

What's worse, in some townships/projects that promise a grand lifestyle, developers do not transfer ownership of facilities with commercial value, such as club house, gymnasium and tennis court, to resident associations.

"Builders retain rights over such facilities in the builder-buyer agreement and profit from it. In such an arrangement, residents end up paying for maintenance while the builder enjoys ownership rights," says Malpani.

In a building, the maximum built-up area is linked to the plot size. The ratio of built-up floor area to plot size is called the Floor Space Index (FSI) or Floor Area Ratio (FAR). It is different for different localities.

Some spaces, such as balconies, terraces, voids, open parking lots and circulation areas, are not included in the FSI calculation. This is because these cannot be monetised. However, in many cases, once the layout has been approved, developers convert these into habitable spaces through 'creative construction' and charge based on the super built-up area, that is, the total area of the apartment plus its share of common spaces, including all open spaces.

Developers have to pay 'external development charges', or EDC, to the government for civic amenities such as roads, water/electricity supply, sewerage and drainage. The EDC is fixed by the local authorities and is passed on to buyers in proportion to the built-up area of their properties. The EDC is clearly mentioned in the agreement.

In the normal course, this should not be a problem, as builders deposit the money collected under EDC with the local authorities. But there have been cases of projects running into trouble as developers did not pay the amount collected under EDC to the authorities. If EDC is not deposited on time, a penalty is imposed. Some developers pass on the penalty to buyers. This is wrong.

"A developer cannot pass on the extra cost to buyers if the penalty has been levied because of its own fault," says Sandhir.

You can check the EDC rates by visiting the local town planning authority. "Builders are not allowed to charge more than the government-approved rate," says Malpani of CommonFloor.com.

For new constructions, developers have to seek clearance from the local authorities. When the building is ready, the local authority awards a completion certificate stating that the approved plan has been followed. This is mandatory for getting basic amenities such as water and power.

But this certificate alone does not give occupation rights. One also needs an occupancy certificate, which is awarded after authorities check that the rules for fire safety, elevators, electrical wiring, water supply and waste disposal have been followed.

"The occupancy certificate is issued by the same authority that sanctions the plan. It does so after verifying that the building has been constructed according to the plan. This is mandatory for all high- and low-rise buildings," says Sandhir of RICS.

Living in a building without occupancy certificate can be difficult. "Without it, residents may not be able to get water and sewerage connections. The local authorities can also demolish buildings that do not comply with their bylaws," says Malpani of CommonFloor.com. "Usually, local authorities regulate such buildings by charging an impact fee, which has to be borne by the residents of the building," he adds.

Many developers, especially the small ones, do not take occupancy certificates. "Builders escape through various loopholes in the law. Having invested their money, and after waiting for years, buyers move in without power, water and sewage connections, fearing they may lose the property," says Singh.

This leads to other problems as well. Lenders do not finance properties without occupancy certificate at the resale stage. One needs completion certificate for registration of the property sale deed as well.

Parking space is an interesting example of the real estate sector's obsession with maximising profits. According to a Supreme Court verdict, parking spaces within the building cannot be sold separately. These are common spaces, which have to be handed over to the society for management. Some builders now include the cost of parking space in the quoted price and mention it in the sale deed. But in most cases, home buyers have to pay extra for parking, that too in cash and without proper documentation.

Though builders cannot sell parking spaces separately, they still allot it to buyers. This allows them to charge Rs 1-15 lakh per parking lot. But even after this, the actual allocation is done by the housing society, the rightful owner of all common areas.

Despite the court verdict, you can still find a number of people complaining about parking spaces being sold to non-residents or being allotted unfairly to some residents.