Top realty destinations to invest in near metro cities

With improving connectivity, expanding cities and rising property prices, more and more home buyers are looking at places close to metro cities. Developers are also betting big on such locations. We look at emerging areas away from metros that promise good returns.

Pritam P Hans
Buy a home for yourself this year. That's the message of Union Budget 2013-14. The Budget has announced an additional tax deduction of Rs 1 lakh for those taking a loan up to Rs 25 lakh to buy their first home this financial year.

If you find the bait attractive enough, the Rs 25-lakh loan cap and high property prices mean you have limited options if you cannot make a big down-payment. One option is buying a house at places not far from metro cities where prices are on the lower side. Even if you don't want to move away from the main city, the high returns that some of these new locations promise means the house can be used as a bridge to the one that you want to live in.

With improving connectivity, expanding cities and rising property prices, more and more home buyers are looking at places close to metro cities. Developers are also betting big on such locations.

"Buying property in a location that is well-connected and an upcoming industrial hub is apt not only from the end-user point of view but also from the investment point of view," says PS Jayakumar, managing director of Value and Budget Housing Corporation (VBHC), a Bangalorebased developer with focus on low-cost homes.

"The Delhi-National Capital Region (Delhi-NCR) should be a good bet, but buyers need to be aware of two situations-one, economic development in the area and, two, rise in inventory with a large number of new properties getting ready," says Ankur Gupta, joint managing director of Delhi-based Ashiana Housing.

To attract both investors and first-time buyers, developers are offering properties in a number of destinations close to metro cities. Some of these are likely to give good returns over the years . 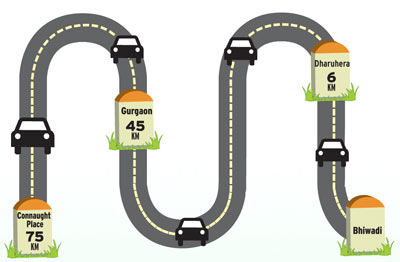 Bhiwadi and Dharuhera are well-connected with Gurgaon and Delhi through National Highway 8. These are at a distance of around six km from each other.

"I will take Bhiwadi and Dharuhera as one region. These have become industry hubs on the Delhi-Mumbai Industrial Corridor (DMIC). Companies such as Honda, Gillette and Lafarge have set up plants there and many others are considering expansion (there). Infrastructure such as schools, malls and hospitals is coming up in a big way and will make life easier," says Gupta.

The DMIC project aims to create new industrial centres in seven states-Delhi, Uttar Pradesh, Haryana, Rajasthan, Madhya Pradesh, Gujarat and Maharashtra-through better rail and road connectivity. It is aligned with a proposed rail freight corridor between Delhi and Mumbai. In this year's Union Budget, the government has expressed willingness to provide additional funds for the project. The first phase is slated for completion in 2018.

"Bhiwadi has properties priced between Rs 15 and Rs 70 lakh while properties in Dharuhera start from Rs 15 lakh and go up to Rs 1 crore and more. Depending upon the time it will take to build the industrial corridor, both locations will offer lucrative returns," says Raj Sharma, managing director, BestPropertyDeals.co.in, a brokerage website.

Most buyers in these locations are not end-users. "Only 20-25 per cent houses launched there have been bought by end-users. The target group is people living on rent in Gurgaon," says Sharma.

Developers say the demand in huge. "Since 1993, we (Ashiana Housing) have delivered around 4,000 homes in Bhiwadi. We see a lot of interest in the future as more employment is created in the area," says Gupta.

Bangalore-based VBHC entered the north Indian market with a township in Bhiwadi. "Nowadays, people are inclined towards industrial areas such as Bhiwadi due to the fast pace of price rise. Our assessment suggested that Bhiwadi would be the preferred location for investors. The response from buyers confirmed this," says Jayakumar.

"One can expect an appreciation of 60 per cent in the next two years. By the time the project is ready for possession, the price would have doubled," says Sharma. Around 50 km from Dharuhera, it is emerging as an industrial hub. Neemrana, part of the NCR, does not have good connectivity. The National Highway 8 is the only major road linking it with Delhi. However, things should improve as it is a major node on the Dedicated Freight Corridor between Dadri (near Delhi) and the Jawaharlal Nehru Port Trust, Nhava Sheva (near Mumbai). It is also part of the DMIC project.

One of the growth drivers for Neemrana is the Japanese Investment Zone where 2,500 acres have been allotted to Japanese companies.

At present, just a few established real estate players such as Eldeco are operational here. However, local players are offering plots and apartments citing proximity to the Neemrana Fort and the Japanese trade hub.

Neemrana is well-connected with the New Delhi international airport (around 105 km). An independent airport is also proposed to be built in the area.

A 40,000-acre Global City is also planned in the Neemrana-Behror area for which land has already been designated. It will be able to house around one million people. Several industrial zones and special economic zones such as the Export Promotion Industrial Park are also in the pipeline.

"Neemrana should benefit immensely from the above factors and provide good returns over a 10-year horizon," according to the Knight Frank report mentioned earlier. 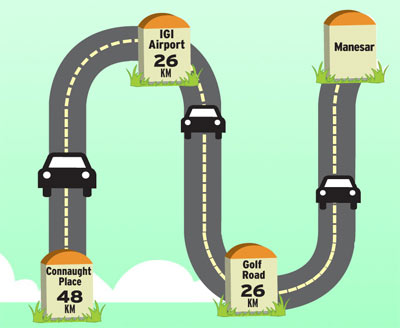 Located in south of Gurgaon, a New Delhi suburb, Manesar is emerging as an important industrial belt with Phase I of the Industrial Model Town already complete. The work on other phases is going on.

Apart from manufacturing, Manesar is attracting information technology and related companies as well. The industrial town is expected to generate a large number of jobs, which will drive demand for residential properties. The Kundli-Manesar-Palwal Expressway, though delayed, is expected to add to the demand. 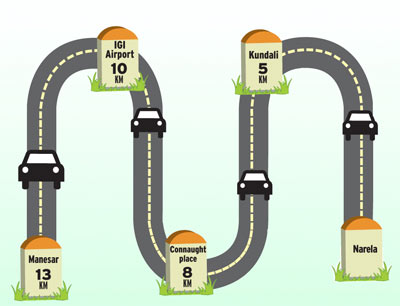 Narela in North-West Delhi is on the capital's border with Haryana. It was planned as a sub-city by the Delhi Development Authority after Rohini and Dwarka.

The area lags in connectivity. This should cease once the Delhi Metro extends an existing line till Narela, providing a direct link to Gurgaon through Delhi. Apart from the metro, it is expected to benefit from the Kundli-Manesar-Palwal Expressway, which is just 10 km away.

A freight complex (392 hectares) is proposed to be built in Narela. Bawana, a small town 10 km away, is also seeing a lot of industrial development. Mumbai property prices can scare away those with small budgets. Such people can bet on Ranjanpada in Navi Mumbai. At present, the Jawaharlal Nehru Port Trust (JNPT) is the main driver of real estate trends here.

Ranjanpada is just 15 km from the Belapur business hub in Navi Mumbai. It is 22 km and 28 km from Vashi (Mumbai) and Airoli (a Navi Mumbai suburb), respectively. Though it is not very far from important employment centres, absence of a proper transport system makes commuting difficult. The JNPT Road is its only link with the other regions. An under-construction Nerul-Seawood-Uran rail line, which is expected to be completed in 2016, will improve connectivity with the rest of Navi Mumbai and Mumbai.

Ranjanpada will also benefit from the Mumbai Trans Harbour Link connecting Navi Mumbai and Mumbai. The work on the link is expected to be commissioned in 2013. This sea bridge will drastically reduce travel time between Ranjanpada and South Mumbai business locations such as Nariman Point and Colaba. 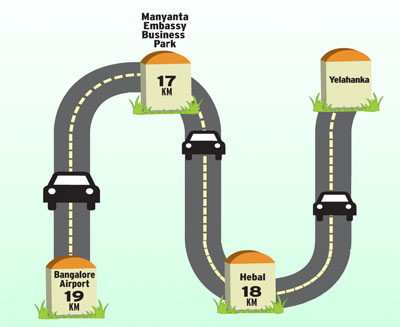 The Bangalore international airport near Devanhalli has been a game changer for the nearby areas. Yelahanka, 19 km from the airport, is also expected to benefit from the development. It is further north of Hebbal, which has emerged as an information technology hub and expected to grow further.

After the airport came up, property prices in Yelahanka rose swiftly. At present, the area lacks quality civic facilities. However, it has good connectivity with Bangalore's city centre. Several road and rail links, including a commuter rail between Devanahalli and Yeshvantpur via Yelahanka, should improve connectivity.

The Karnataka government has formed a body to promote development in the region and develop North Bangalore as a business hub. With multiple projects and proposals, 40 lakh jobs can be generated in the region over the next two decades, say experts.