Projects with both commercial and residential spaces offer good returns

Mixed-use property projects offer the best of residential and commercial real estate. At least that's what developers say. Let's see how good are these projects- which have residential as well as commercial spaces-for end-users.

Pritam P Hans
Mixed-use property projects offer the best of residential and commercial real estate. At least that's what developers say. Let's see how good are these projects- which have residential as well as commercial spaces-for end-users.

More and more developers are launching mixed-use projects as they struggle with financial pressures building up since the 2008 global economic slowdown . To tide over the pressures when the crisis struck, many developers at first converted commercial projects to include residences as the demand for offices and shops slumped. This helped them diversify and reduce risk. The returns, too, were better than from stand-alone projects. The trend caught on.

These projects worked for home buyers too, by giving them an option of staying close to their workplace and other social infrastructure.

From a buyer's perspective, mixed-use projects-if planned and marketed properly-are good as an investment as well as for living.

Supertech is building Supernova in Noida, which it claims is India's largest mixed-use real estate project. For instance, Spira, one of the buildings in the project, has residences, studio apartments, a hotel, a shopping mall and offices.

Developers are launching such projects to cash in on the demand for self-sustainable cities with basic social and physical infrastructure.

"There is an increasing demand for such properties from people wanting to live in self-sufficient townships. Such properties cater to these requirements," says Percy Chowdhry, director, Rustomjee, a Mumbai-based real estate developer.

Mixed-use projects tend to be advantageous for both developers and buyers. "From a developer's perspective, the primary benefit of mixed-use projects is that they capture all three segments of real estate-residential, commercial and retail," says Anshul Jain, chief executive, DTZ India, a real estate advisory.

"From a buyer's perspective, such projects-if planned and marketed properly-are good as an investment as well as for living. This is because of lower travel time between houses, shopping centres and workplaces," Jain adds.

For developers, the model offers the chance of earning good returns by giving more flexibility in land use. "These projects are self-sustainable. Also, the development risks are distributed. There is always the possibility of restructuring the project based on demand (for particular types of properties)," says Kumar Bharat, director, BCC Infrastructures, a New Delhi-based developer with projects in the National Capital Region.

Also, the demand for residential and commercial spaces feed each other. While those who live nearby become the customer base of shopping malls, schools, hospitals and entertainment centres, the presence of commercial spaces, in turn, creates demand for homes.

"This creates an investment-friendly environment both for us and buyers. We get potential buyers and sellers under one roof, which is not the case with projects that are either residential or commercial," says Bharat.

Mixed-use property projects can be a good option at both developed and upcoming locations. A project at a developed location will, however, have an edge over that at a new location.

DOUBLE BENEFITS
> Residential and commercial spaces fuel demand for each other.
> Self-sufficient townships offer better living environment.
> Planned development away from the congestion of cities.

"Like any real estate project, a mixed-use project in a developed or a fast developing zone definitely fares better due to the advantage of social and physical infrastructure," says Jain.

Though mixed-use projects at developed locations are sought after by both investors and end-users, such property projects are generally built on the fringes of existing cities.

"As mixed-use projects require large tracts of land, it is peripheral locations along the major cities which are witnessing such developments. Having said that, a mixed-use project in a developed or a fast developing zone fares better due to the infrastructure advantage," says Jain.

With a large area under development in cities' peripheries, mixed-use real estate projects provide an opportunity for planned development away from the congestion of cities.

"Such developments within townships ease the pressure on the city's existing infrastructure," says Chowdhry of Rustomjee. "Mixed-use developments fuel the growth of the area-both economically and socially. So, investors can expect higher appreciation," he adds.

Mixed-use projects were considered risky in the beginning as the concept was new to Indian developers, investors as well as end-users. With time, their success has set aside these fears.

"Initially, it was public sector companies doing the same work for their employees (by setting up integrated townships for them), but now it is getting privatised. It is still at a learning stage," says Bharat of BCC Infrastructures.

Most developers are optimistic about the future of this development model.

"Mixed-use development is a popular phenomenon the world over and certainly the future of real estate in the country. We are confident that as more people are exposed to such developments, it will further encourage developers to include such projects in their plans," says Arora of Supertech.

"Mixed-use developments have a bright future as they take care of most needs of a consumer, adding tremendous value-socially and economically. Because of the inherent advantages, their acceptance is going to increase gradually," says Chowdhry. 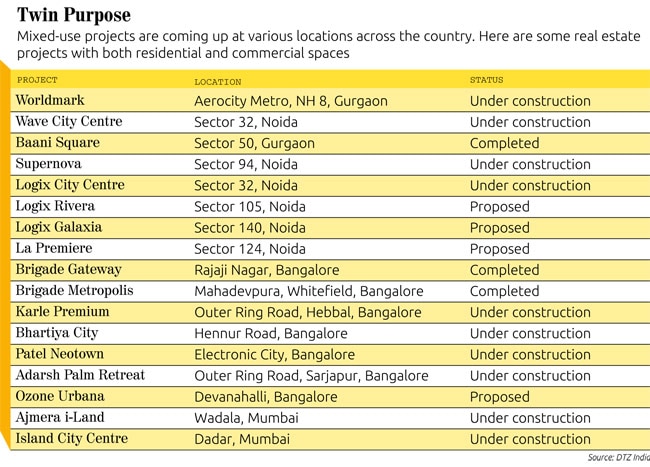