Many developers offer to pay interest on the loan till possession. This is good news, but only if chances of the project getting delayed are low.

The festival season is here. It is considered an auspicious period. That is why many people do the biggest shopping of their life-buying a house-this time of the year. To woo customers, developers also come out with various schemes. At present, the most advertised, and probably the most innovative, is the interest subvention scheme. Though these schemes have been in existence for few years, this festive season, developers are betting big on them to attract buyers.

There are three parties-the buyer, the banker and the developer. The buyer books the property by paying 5-30% money upfront. The rest is paid by the bank in the form of loan to the buyer. The bank disburses the loan to the developer as construction progresses. All this is routine. The most important aspect is that the developer bears the interest cost till possession or for a fixed period mentioned in the buyer-seller agreement.

This seems a good scheme for those who stay on rent as they don't have to bear the burden of both loan equated monthly instalments (EMIs) and rent while their house is being built. Also, as the developer is bearing the interest cost, it has an incentive to finish work on time. This is an added advantage for buyers at a time when project delays are so common. According to data from Liases Foras, a real estate research firm, only 29% projects in the national capital region were on schedule in June this year.

Earlier, banks used to pay the full loan amount to developers upfront. Last year, the Reserve Bank of India, or RBI, asked banks to link payments to the progress of construction. Earlier, a buyer could book by paying 20% amount. Developers used to get the rest 80% from the bank upfront and bear the interest cost till possession. But in this system, the risk was on the buyer as the loan was on his name.

Also, the developer got all the money straightaway and had little incentive to finish the project on time. In case of any delay/default, it was the buyer who got into trouble. To reduce these risks, the RBI directed lenders to disburse loans according to construction milestones.

A few subvention schemes on offer

WHY DEVELOPERS LAUNCH THESE SCHEMES

In view of tight liquidity, with banks not willing to lend directly to developers, such schemes provide builders access to funds, and that too at a low rate. It also helps buyers, who do not want to commit a big sum upfront as project delays are nowadays common.

"Due to skyrocketing prices, it is apparent that people are unwilling to commit huge sums upfront. Therefore, deferred payment plans are the flavour of the season," says Aditya Verma, CEO, makaan.com.

PROBLEMS YOU MAY FACE IF YOU INVEST IN SUCH SCHEMES

>> Non-payment or late payment of EMI by the builder can spoil your credit score as the loan is in your name. You may also face project delays. On any consumer complaint forum, you can find a large number of people complaining about project delays under such schemes.

>> A subvention scheme could be a double-edged sword if you are staying on rent. You may have to bear the burden of both rent and EMI in case the developer fails to deliver the project on time.

>> You may end up paying much more than the price of the property in case of delay. Some subvention schemes are for only a fixed period, after which the buyer has to bear the interest cost. "Subvention schemes tempt buyers to buy something they may not otherwise buy. The risk involved is that the buyer is expected to start paying EMIs after the subvention period is over, even if he/she has not yet received the possession of the property. In such a scenario, the customer faces the risk of overpaying or, in some cases, risk pertaining to delivery of the property," says Advitiya Sharma, co-founder, housing.com.

>> There are chances that the funds disbursed by the bank are used for financing other projects. "In today's scenario, where over 10 lakh houses are delayed, home loan companies can't work in a traditional manner where they force buyers to pay interest on time on projects which are delayed. As of now home loan companies don't have any responsibility to ensure that the project for which the loan is taken is being built or not," says Vineet K Singh, Business Head, 99acres.com.

>> Check the financial strength of the developer. Also, try to find out about its past record of delivering projects on time. 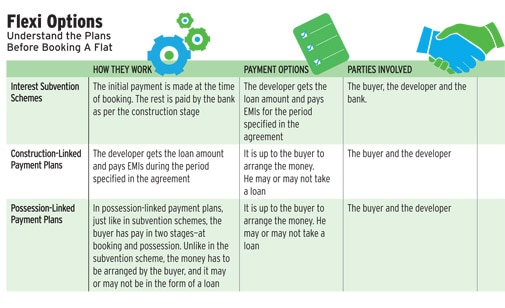 Understand the plans before booking a flat
Click here to Enlarge

>> One should check the promised possession date in the documents and the penalty to be paid by the developer if the project is delayed.

>> Read the fine print. Go through all terms and conditions of the agreement before signing it.

SHOULD YOU GO FOR IT?

These are good schemes for people who stay on rent and want to buy their own house. "One can go for a subvention scheme if one earns Rs 6-20 lakh per annum as it provides a good opportunity to own a house without paying EMIs till the subvention period," says Tayal of Informage Realty.

But some say that one should go for these schemes only if the builder has a credible track record. "One should avail of this scheme if the chance of the developer missing the deadline is low," says Verma of makaan.com.

WITH WHICH BUILDER DID YOU BOOK THE FLAT AND WHAT WAS THE SCHEME?

I booked a house with a leading developer in Chennai. The problem that all buyers faced was delay in completion of the project. But my case was different. I bought the flat for Rs 20 lakh. I signed the application-cum-terms & conditions form without reading the text. I also did not take a copy of the papers from the company. I paid Rs 1,65,846 by cheque. The company promised that the project will be delivered in 12 months. It prepared and shared the agreement with me after I paid my first instalment.

WHEN DID YOU BOOK THE FLAT AND WHEN WERE YOU SUPPOSED TO GET POSESSION?

I booked the house on 30 April 2012. They gave a verbal commitment that I'll get the house by December 2012. Plus, there was a three-month grace period, I was told. However, in the agreement, the company mentioned 36 months plus six months grace period, which was not mentioned in the application.

WHAT PROBLEM DID YOU FACE?

They were not ready to accept my cancellation request and refund the money. They said that I have agreed in the application-cum-terms & conditions document that withdrawal from the project will lead to deduction of at least Rs 2 lakh. I tried but wasn't able to get my money back.

WHAT DID THE BUILDER SAY WHEN YOU APPROACHED IT?

They asked me to ignore the 2nd and future instalment notices. They promised to take the issue to the vice president of the company for a refund. But nothing has happened as yet. I asked why has the possession detail not been mentioned in the application form and why is there a difference between the application copy and the agreement.

WHAT STEPS DID YOU TAKE AFTER THAT?

I have taken the issue with the police and filed a compliant but there is no result.

WHAT WILL BE YOUR ADVICE TO PEOPLE WHO INVEST IN SUCH SCHEMES?

Prior to signing any papers read them carefully and clear all your doubts with the builder.