Investing is all about spotting the right opportunity. Places where big infrastructure and industrial projects come up see rapid growth, ensuring good returns on property investment. We explore some markets with huge growth potential.

AHMEDABAD
Ahmedabad, among India's fastest-growing cities for years, has only recently started realising its real estate potential. It is witnessing a construction boom and an increase in population. Ahmedabad: The city is witnessing a boom in industrial and real estate activities.
"The city has huge potential due to industrial growth. For example, considerable economic activity is expected because of Tata Motors' small-car project, which is expected to boost real estate prices in and around Sanand," says Anuj Nangpal, director (investment advisory), DTZ India, a real estate consultancy.

The city has many developing and premium areas and a large number high-income individuals. According to the National Housing Bank's (NHB's) residential index (Residex), prices of houses rose 33 per cent in the year up to June 2011. Despite this, properties are relatively affordable. Land, too, is available at relatively low rates.

"Ahmedabad-Surat-Vadodara is an emerging metropolitan cluster. While Ahmedabad is the largest city in Gujarat, Vadodara is a major industrial centre with big pharmaceutical and chemical manufacturers. Surat is known for its textile and diamond processing industries. The region is expected to embark on a growth trajectory with landmark projects such as the Delhi-Mumbai Industrial Corridor (DMIC) and the Gujarat International Financial Tec-City," says Himadri Mayank, senior manager, research and real estate intelligence service, Jones Lang LaSalle India (JLL).

KOCHI
Dubbed as the commercial capital of Kerala, Kochi is an important port city. It is also emerging as a hub for information technology and related services. 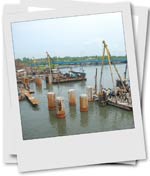 Kochi: Money sent home by NRIs is driving the economy.
Tourism and trading in spices are the main drivers of the local economy. The region gets substantial funds from locals working abroad. "Kochi's real estate market has largely been driven by repatriation of funds by non-resident Indians (NRIs). The city's real estate market is expected to see significant growth once under-development facilities such as the Vallarpadam international (shipping) container terminal and technology parks become operational," says Nangpal of DTZ.

The terminal and technology parks will generate jobs and increase the demand for real estate. Prices of houses rose 30 per cent in the year to June 2011, according to the NHB's Residex.

Kochi has its own risks. "Kochi relies heavily on NRI money. As the global economic scenario is not very good, the stability of this revenue source is questionable," says Zia Gulam, national director (research and advisory services) with property consultant Knight Frank India. "The progress on port-based special economic zone (SEZ) and IT parks is also slow," he adds.

COIMBATORE
The economy of Tamil Nadu's largest industrial centre after Chennai is largely driven by the textile industry, followed by IT and health care sectors. With demand being driven by the locals, the city has witnessed mediocre growth so far. The growth dynamics are expected to change with operationalisation of various planned infrastructure and commercial projects.

Coimbatore: The industrial centre is known for its textile industry.
"The region currently has two operational SEZs. Five more are expected to become operational over the next three years. The new SEZs will generate employment and bring migrant population. This is expected to boost real estate growth in the city," says Nangpal.

Kochi-Coimbatore-Thiruvananthapuram is an emerging metropolitan hub, says JLL's Mayank. "The Coimbatore-Tirupur-Erode industrial corridor will contribute to industrial growth of the state. Tirupur, which is 50 km from Coimbatore, contributes nearly 75 per cent to India's textile exports. Coimbatore, known for its industries, has become a preferred destination for the IT sector, thanks to incentives given to IT companies by the Tamil Nadu government," he says.

KOTA
This Rajasthan town is a training hub for students aspiring for premier technology and medical institutions. It is also an industrial centre with large factories in engineering equipment, fertiliser and chemical sectors. The town is seeing hectic real estate activity, mainly industrial and residential projects. Kota: Coaching centres are fuelling the demand for real estate.
"Emergence of several medium and big companies in and around Kota is largely behind the boom in commercial and residential property markets. It is a well-established regional urban centre and a focal point of industrial development in the state," says Nangpal.

Coaching centres have played a big role in boosting demand for real estate in the city. Some are wary of investing in Kota as they fear that such a demand is likely to be fragile.

"The model of tuition centres is risky. It does not offer deep-rooted growth opportunities. These centres are not contributing to the local economy as the students leave the city after a short stay," says Gulam of Knight Frank.

Despite this, abundant power and water along with good connectivity to Delhi and Mumbai should help industry in Kota. As the city will benefit from the east-west corridor highway project, industrial activity should pick up, increasing the demand for real estate-both residential and commercial.

REWARI
An industrial hub in Haryana, Rewari has manufacturing units in a wide range of sectors-automobile parts, light engineering, chemical, machinery, electronics, pharmaceutical and textile. Proximity to key production and consumption centres of the National Capital Region is a big advantage.

Rewari is part of the DMIC project, which envisages creation of new industrial centres in seven states-Delhi, Uttar Pradesh, Haryana, Rajasthan, Madhya Pradesh, Gujarat and Maharashtra. The project is aligned with the proposed rail freight corridor between Delhi and Mumbai. It envisages strong rail and road connectivity to promote economic growth in the region.

Apart from Rewari, the DMIC project is expected to fuel development in places like Palwal and Hissar in Haryana; Phulera and Bhiwadi in Rajasthan; Dholera and Vadodara in Gujarat; and Nasik in Maharashtra.

"At present, you have the option of investing in agriculture land in areas that will benefit from the DMIC project. The growth prospect is bright as agriculture land can be later converted for residential use," says Gulam.

"At present, no prominent developer is present in Rewari, but land is available at reasonable rates," says Nangpal of DTZ.

Rewari offers opportunities for logistics real estate such as warehouses as it is an important junction on the rail freight corridor. An integrated logistics hub is proposed to be built there.