Realty watch: How to decide between buying a plot and a house

Buying a property is tough. As if saving money for the goal isn't arduous enough, you have to rack your brain to decide what to buy - an apartment or a built-up house or a plot.

Pritam P Hans
Buying a property is tough. As if saving money for the goal isn't arduous enough, you have to rack your brain to decide what to buy - an apartment or a built-up house or a plot. Besides lifestyle preferences, one has to look at aspects such as taxation and bank loans as well.

While buying an apartment, one does not have to worry about hiring an architect, seeking approvals from local bodies and dealing with contractors. The developer takes care of these things and hands you the house where you can start living immediately.

You also do not have to worry about things such as power backup, maintenance and security. You get these services as well as common facilities such as club house and swimming pool. If you buy a plot and build a house on it, you will miss these comforts, unless it's in a gated community developed by a builder.

But plots have a big plus-they are usually ready for possession. Even when part of a big real estate project, you are likely to get possession of a plot much before the flats will be ready.

Location is the key to price rise. If the market is stable, the value of a plot will rise over time. As developing a plot is easier than building a structure, the value of your investment is likely to rise faster in a short span. This means you can exit investment bets earlier.

The supply-and-demand equation also works in favour of plots as land becomes scarcer. The value of plots generally rises faster than that of apartments. Also, age does not affect a land parcel, but a structure becomes dilapidated with time. Besides, in an apartment, you have limited layout options.

This is not to say the price of an apartment will not rise. Location, infrastructure and neighbourhood push up the value of both plots and apartments. However, the value of a building has to factor in the depreciation due to age.

Tax treatment for the two is different. When you borrow to buy an apartment (or a built-up house), loan repayment entitles you to some tax deductions.

If you live in the apartment, you are eligible for deduction up to Rs 1.5 lakh per financial year for interest paid on the loan (provided the loan has been taken on or after 1 April 1999). You can also claim Rs 1 lakh deduction for repayment of the principal. If you buy a second house, the full interest paid is eligible for tax deduction. However, in such a case, the rental income is added to your taxable income.

"The deduction of interest is allowed even if the same is payable and not actually paid," says Avinash Narvekar, tax partner, real estate practice, Ernst & Young India, a consultancy firm.

When you borrow to buy a plot and build a house, the tax treatment is similar to what you get when you buy a built-up house or an apartment. However, the tax deduction on interest is available only from the year the construction is completed.

Interest accrued during the construction period can be claimed as deduction over five years in equal instalments starting from the year of completion of construction. This means tax benefits are delayed when you build your own house.

"One can also claim deduction towards principal from the year the property is acquired on completion of construction," says Parizad Sirwalla, partner (tax), KPMG India.

Holding a plot as an investment does not entitle you to any tax benefit, but you can still claim deduction for the interest paid.

"The interest paid on any loan for purchase of land which is vacant shall not qualify for tax deduction. However, if the plot is rented out, irrespective of whether the rental income is offered for taxation as 'business income' or 'income from other sources', the interest paid on any loan used to buy the plot can be availed of as deduction. There will be no tax benefit for repayment of the principal of such loans," says Sirwalla. 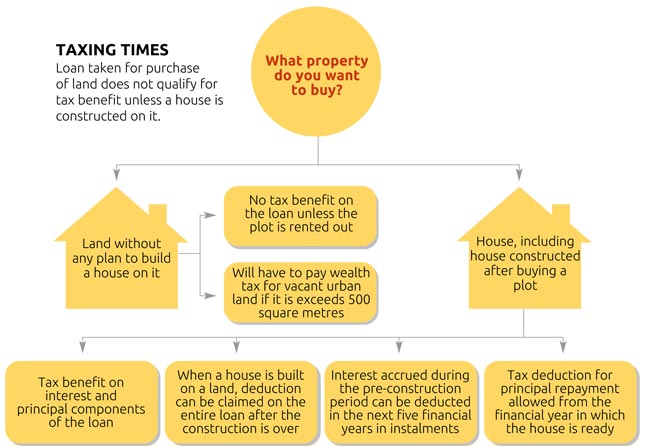 If you want regular income, the only way is to buy a house or build one. You can rent out an apartment whenever you want and get 3-5 per cent value of the property as annual rent. This is not possible in case of plots.

Owning multiple houses and plots means additional tax burden. You can show only one house as selfoccupied. Others will be considered to have been let out. You will have to pay tax on income from other properties even if they remain vacant (in which case a value will be assumed based on certain parameters).

Ownership of more than one house which is neither self-occupied nor let out and urban plots exceeding 500 square metres attracts wealth tax, subject to certain exemptions.

"If the house is used for business or profession or as a commercial establishment, forms part of the stock-in-trade or is rented out for at least 300 days during a financial year, no wealth tax will have to be paid," says Sirwalla.

"For wealth tax, urban land will not include land on which construction is not possible or land on which a building has been constructed with the approval of the appropriate authorities or unused land held by an individual for industrial purposes for a period of two years from the date of acquisition or land held as stock-in-trade for 10 years from the date of acquisition," she adds.

All qualifying properties are included in net worth after deducting the related debts. If it exceeds Rs 30 lakh, you have to pay 1 per cent of the amount in excess of the limit as wealth tax.

The choice between plot and house should also be based on the desired holding period and costs incurred in executing the transaction. Don't forget to take note of the applicable taxes and reversal of tax deductions already claimed.