Real estate developers are wooing consumers with projects that have fewer floors and are more affordable compared to high-rise buildings. 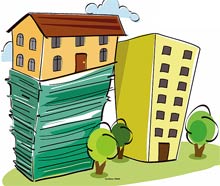 'Buy land, they are not making it anymore,' said Mark Twain. If only investing in real estate was as simple as saying 'buy land'. Given the unavailability (in cities), uncertainty (of appreciation in under-developed areas) and unreliability (about the title), buying land is no longer an option for many. Today, most buyers look at built property as their first option, not just to avoid the hassle of constructing a house, but also because of easy availability of finance for such projects.

Even if you choose to buy an apartment, the land on which it is built and your share in it play an important role in its potential price appreciation. In fact, the registered sale deed guarantees the right of ownership to land equivalent to the carpet area of your apartment—an 'undivided share of land'. This is the part of land designated an individual apartment and registered in the name of the buyer. It is referred to as 'undivided' because the land has no specific boundaries within the project, but you still have a right to it. So, assuming a four-in-one apartment (all four of equal sizes) on a 2,400-sq-ft plot, the undivided share will be 600 sq ft.

Though this seems only like a notional share of the entire project, your share of land has an important role to play in the appreciation potential of your apartment. Here's how. The price of any apartment has two major cost components. The first is based on the cost of construction, which is usually the same for similar quality of construction within a location. The second component is tied to the share of land in the apartment. As the apartment ages, the building component depreciates in value, but the share of the land component appreciates. The greater the share, the better the deal.

This seems like a basic concept, so why are we emphasising on it? It's because now you have the option of maximising your undivided share of land. This can happen only if you buy low-rise apartments as opposed to high-rise projects.

Typically, low-rise apartment units have a 'ground+2 floors' or 'ground+3 floors' plan. Of the total number of real estate projects launched in the past 10 months, 55 per cent were low-rise. The opportunity to buy one is magnified as most of these projects are in the 'affordable' segment, even in the metros, where low-rises have not been a popular phenomenon till now.

For instance, in the National Capital Region, realty players such as BPTP, Vatika Group, Raheja Developers and Assotech are catering to this demand in the market. While not everyone attributes this trend to the cost factor, they definitely see the demand. Says Harinder Dhillon, general manager, marketing, Raheja Developers: "This trend is coming up as some customers prefer the privacy and space that independent floors offer. Besides, the additional costs arising from facilities like lifts, larger common areas and equipment maintenance are saved in the case of low-rise development. Also, one gets the benefit of adequate space, which may be a constraint in high-rise apartments."

If you are wondering why a developer would want to build a low-rise apartment vis-a-vis a big volume one, here's a good reason. The cost of construction is lower (up to 50 per cent cheaper than high-rises) and less equipment is required for maintenance work. So costs are saved and developers tend to operate on a high-volume strategy.

Says Nitesh Kumar, director, marketing, TDI Group: "Building low-rises helps to cut costs as a number of services can be done away with. For instance, fire norms are easier to follow, separate parking space does not need to be created within the structure, there's no need to maintain a basement and elevators are not required. All this amounts to significant savings for the developer."

In a slow market, this format of construction has picked up. It makes sense for a developer who is short on cash to go for low-rise projects. As this involves low-rise, lowdensity development and concentrates on basic infrastructure, the speed of delivery is much faster compared with high-density development. This enables developers to complete more projects in a given time frame. Also, since there are no cost-intensive construction activities, the developer faces a much lower risk.

Click here to Enlarge
However, low-rise projects are not just about buying cheap or a result of cost-cutting. Low-density housing, with homes set out spaciously amid sprawling green spaces, is growing increasingly popular and real estate developers are wooing buyers with such niche projects. Low-density housing projects have an average of 10-20 dwelling units per acre and are priced at a premium compared with group housing, which, on an average, has 35-40 units per acre. Says Anurag Mathur, deputy managing director, Cushman & Wakefield: "Senior executives employed with Indian and multinational corporations as well as established business families from cities still consider locations around the business district as 'home' and prefer exclusive low-rise buildings rather than suburban mass housing complexes."

Experts also cite other inherent advantages of a low-rise that buyers prefer. For instance, if it's a holiday home, projects are usually located away from busy areas. This gives them a better resale value, investment appreciation as well as peace and privacy. "Sound infrastructure, especially good roads, are a major incentive for people to invest in getaway properties on the outskirts of a metro. This, coupled with the fact that the construction is low on density and high on ventilation, makes it more attractive for buyers," says Rohit Parihar of Realtech Investments, a real estate consultancy. Adds G. Anilkumar, head of marketing, Southern Investments: "No amount of landscaping and terrace gardens can make up for the congested environs and lack of open spaces in a highrise complex."

Another favourable factor is the facility to expand the existing construction. "Usually, low-rise living is associated with growing families, but more young professionals and single people are opting for this lifestyle. Home-owners with pets find it more convenient to live in a low-rise scenario," says Parihar. "One drawback faced by high-rises is that apart from the higher cost of construction, civic amenities may not be adequate. So, in the case of a 20-storey project, if the local fire department does not have cranes that can reach it in case of a fire, it makes for a perilous situation," points out Kumar.

Why affordable low-rises may be a short-term trend
While the low-rise trend has picked up, some experts believe it may not last long, especially in the affordable segment. The major reason is that the margin for the developer is less compared with that in a high-rise. In a taller building, not only is there extra money to be made on common facilities, the maintenance cost is also higher. Another factor is the increasing land prices, especially in areas close to cities. "In the centralised locations of metros such as Delhi, Bengaluru and Mumbai, a builder's first instinct is to maximise the available area by building a highrise project," says Gagan Singh, CEO, project development services, Jones Lang LaSalle Meghraj.

Also, the government housing policy insists on a particular density for every acre of developed land. Space-hungry villas are, therefore, less popular with planners than blocks of flats, which can accommodate more people on a single plot. In July last year, the Haryana government, in a bid to promote affordable housing, announced a scheme that caps the price of homes. In return, the government has granted permission to builders to make more housing units of smaller sizes in the same area. The incentives include a relaxed density norm (from the current 250 people per acre in Gurgaon to 600 people per acre), and higher ground coverage area, from 35 per cent to 50 per cent.

"Today, every developer is building low-rises to generate cash flow as these sell easily due to their low prices. However, all states have a density factor (the number of people staying per acre), which a developer has to keep in mind while planning the project. So, to maintain the density, a developer will also have to build high-rises," says Kumar.

This is good news for the existing owners. The growing demand means low-rises will be valuable assets as prices will continue to appreciate. Urban development experts also feel that the development of satellite townships would push up the demand for low-rise apartments. They see it as an answer to the intense pressure on civic infrastructure in the core areas of cities.

The decision to go for a highrise or low-density project will be based on your individual preference. For instance, if you are looking for an apartment with a view, then a high-rise flat is a better option. However, also remember that low-rise projects may not be priced in the affordable range as the market recovers.

Why go for a low-rise