We give car enthusiasts their due and rate cars on how well they suit a driver, classified into six price categories. Here's the second part of the series.

As we come to the second part of the series on best drive's cars, the competition gets tougher and the winners often take the top prize by just a few points. Pay close attention to the specifics and a machine's performance under each head to choose the car most suited to your needs.

Toyota Etios
Between Rs 4-6 lakh
This is easily the biggest segment in this test with 30 cars and the best of the lot is rather surprising.

It's a tie between the Etios and the Micra diesel. Both score high under Drive, but that was sort of given.

The Etios has an engine that's light and peppy and gives it the best standing start acceleration. It takes 11.5 seconds to complete the 0-100kmph run. The only other car that comes close, and comes very close indeed, is Hyundai's i10 with the Kappa2 engine, with just 0.1 second more. This makes the i10 one of the quickest hatchbacks in the country. Best Rs 4-6 lakh car: Specifications
Click here to Enlarge
The Micra, with a 1.5-litre diesel engine, isn't as quick off the line but, owing to its torque manages, has better roll-on figures. What helps the Micra's cause though is its high range on a tankful of fuel and its engine's environmentally friendly nature.

The Dzire, the Swift (both petrol and diesel), the Fabia and the i10 complete the top five in this price bracket.

The Etios though isn't the best when it comes to Dynamics. It excels with braking but loses out on account of relatively poorer steering feel and of course, being a sedan, manoeuvrability.

The Fabia has the best dynamics, followed by the i10.

Best Rs 4-6 lakh car: Scorecard
Click here to Enlarge
The Skoda has the best steering response, the best directional stability and the highest grip among the top.

The i10 has a lot going for it as well; it has a good engine that helps the Hyundai post acceleration times quicker than even the Swift petrol and it has a respectable top speed too. It primarily loses out because of it's driveability. Slightly shorter gearing would be more appealing given that it has a good shifting gearbox.

Volkswagen Vento 1.6 TDI: The diesel engine alone makes the Vento a very likeable car for the driver. It's acceleration and roll-on are both impressive.
Between Rs 6-8 lakh
The Vento, with its muscular 1.6-litre diesel engine, emerges as the best driver's car in this bracket. It is the cheapest trendline version that makes it to the charts here, but has the same hardware as the more expensive versions.

The Vento diesel is not only among the quickest, but it also has the top speed. Most of all, it has the best driveability. The Vento takes 10.6 seconds to get to 100kmph, followed by the new Verna with a 1.6-litre petrol engine.

SPECIAL: The man behind luxury cars in India

Best Rs 6-8 lakh car: Specifications
Click here to Enlarge
The Vento simply scampers away while overtaking or accelerating through gears. This makes it a great car to drive around the hills. It also has a gearbox with relatively sporty shifts. The shifts aren't as effortless or precise as in the Polo or the Fabia but it's not cumbersome either.

It's a tie between a peppy diesel engine and an equally spirited petrol engine for second place; the Hyundai i20 diesel and the Polo 1.6 petrol. The Hyundai is the slower of the two, taking 12.6 seconds compared with the 11.2 seconds taken by the Volkswagen.

Volkswagen Polo
Now, the i20 might not have as good a steering response or stability as either the Polo or the Vento, but it certainly outclasses both the Volkswagens when it comes to braking.

The i20 also beats the Polo 1.6 on drive, though by just a single point. Though the Polo is the quicker of the two, the i20 has the diesel advantage and is kinder to the environment. The Polo though negates this advantage with a more involved gearbox. 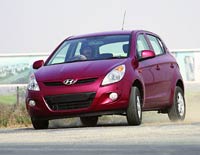 Hyundai i20
Next in line and separated by just a single point is the Fabia 1.6. It has all the attributes of the Polo 1.6, but doesn't look as good. Not that it counts in this test. Next up is the SX4 petrol. Like the Vento diesel, it is quick off the line and has a respectable top speed.

The bottom of the category is crowded by SUVs (not included in the table), which, given their purpose, size, weight and suspension characteristics, doesnt come as a surprise.

Among the SUVs, the Scorpio is the best. It has the best engine among the leviathans and outdoes the Safari on dynamics. The Xylo is the next best. It is more dynamically able than the Scorpio, especially when driving quickly on a busy highway.