Petrol price worrying you? Check out these fuel-efficient cars between Rs 3-25 lakh

The simplest way to save on petrol costs is to buy a fuel efficient car. So, Auto Bild give you the most miserly petrol cars in four price brackets.

Petrol prices are rising relentlessly and there seems to be no respite in either the short or the long term. In Mumbai petrol costs Rs 76.4 a litre, in Chennai it's Rs 75.4 per litre. Delhi residents have it a little easy with petrol costing relatively less at Rs 70.2 per litre.

So, even saving that little bit on fuel can add up to a neat sum for frequent users. With the growing urban population burdening cities, distances to travel has increased and there is more traffic now, more than ever.

Making the situation even more challenging is the fact that individual incomes aren't rising as steeply or quickly. And, travel distances are constantly increasing and the traffic is getting worse by the day. It will be, in all probability, a one-way graph.

Saving fuel starts with the right car. It does not matter what price segment you want to buy it from , there is a right choice for efficiency and we can help you choose the best.

We will compare the ten best fuel-efficient petrol cars in various price segments and also add vital statistics such as  engine capacity, power, top speed and, of course, the price for comparison.

It's a segment dominated by Maruti-Suzuki and not surprisingly, it's the same engine that's powering most of these cars - the three cylinder 998cc K-series engine. But of the lot, it is the Estilo that manages the most kilometres to a litre. The Eon, which is significantly cheaper to buy than the Estilo, comes in next with a figure of 16.7kmpl.

However, for a good balance between price, fuel economy as well as performance, the Ritz is the choice. The Estilo is based on the Wagon R and makes great sense for those who are on the verge of retiring and will not want to buy another car. Besides fuel efficiency, it is a small-size car and therefore easy to drive (and park) and the visibility isn't bad either. Moreover, in the higher Vxi trim, there's an acceptable level of comfort equipment too, especially at the price it comes for. Rs 4-6 lakh: Bigger and not poor on economy

Maruti continues its domination in this price bracket as well. But, surprisingly the Dzire is more efficient than the smaller Swift. Even though, the Swift makes a better case because it is cheaper and quicker. The Dzire has a larger boot and more comfortable rear seats. Even though the Dzire is a bit slower, top-speeds are identical and so are the features. Overall, given the higher economy and a better feel good factor, we'd say it's worth the Rs 50,000 premium over the Swift.

Next up is the Toyota Liva, followed by its sedan version, the Etios. What makes Etios really special is that it has a 1.5 litre engine (compared to Liva's 1.2 litre) and has better economy than cars that are powered by a 1.2 litre engine, such as the Fabia. The Honda City is the most efficient car of the lot, followed by the Vento and the Jazz. In fact, for those looking for a balance of performance, price and fuel economy, the City is the best choice. It is the best selling petrol sedan for a reason.

Besides being efficient, it is also the most spacious in its class and has a good ride and handling balance. It is comfortable and the styling is pleasing. It has light controls as well. Most of all, there is no denying that the City has the highest snob value in its class.

We have two hatchbacks here as well, but both the Fabia and the Polo are powered by larger, more powerful 1.6-litre petrol engines against the 1.2-litre units used in the lower price bracket. Another car that balances performance and fuel economy decently but is the most expensive car in our top 10 is the Linea T-Jet. We were surprised to note that the Verna finished 8th and it was the 1.6-litre version of the car that did better than the 1.4. 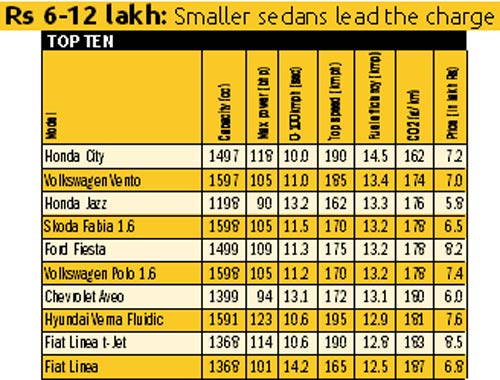 It is extremely close in this price bracket with less than one kilometre per litre separating the top five. The Laura and the Civic have identical displacement, and despite the Skoda being turbocharged and the Honda naturally aspirated, both return the same overall fuel economy.

It's the Laura that returns better economy on the highways, while the Civic is better in the city. The Laura is available in two trims, both sporting manual transmissions. Of the two, stick to the basic version. The build is good and it is a comfortable drive on most roads.

Our recommendation, is the Superb, assuming you have the money. Among SUVs, the Outlander and the X1 return exactly the same fuel efficiency, even though the former has a larger engine and a CVT box. The Outlander is also cheaper and is our choice if you are looking for an efficient petrol SUV. 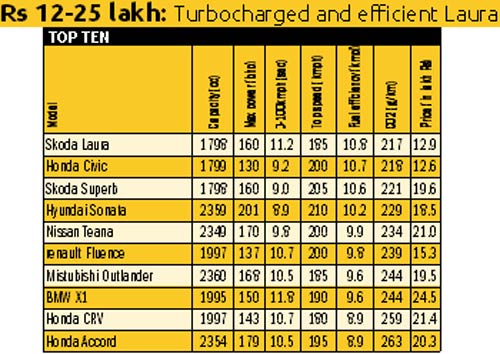