We give carenthusiasts their due and rate cars on how well they suit a driver, classified into six price categories. Here's the final part of the series

With its 1.8-litre engine and a manual gearbox, the Altis is the best driver's car in the Rs 8-12 lakh category.
We've come to the third and final part of the series on best driver's cars. The best in both categories take it easily but the competition is tough for second and third places. But always pay attention to a car's performance under each head to choose the one most suited for you.

One car that had impressed on launch was the Corolla Altis. Now it's a car meant to be driven in India. It handled the various tests - slalom, elk, and even the circuit and the skid pad - quite well. No surprise then that it is the best driver's car one can buy in this segment. Its 1.8-litre petrol motor gives it credible acceleration and a category leading top speed. It gets to 100kmph in 11.8 seconds and to a top speed of 190kmph.

The Altis isnt the quickest though. In fact, the second placed diesel Vento quite comfortably out-accelerates the Toyota. But yes, the Volkswagen is beaten on top speed compared with the Corolla.

If its the quickest car you are looking for at this price, that honour quite clearly belongs to the City. It also has the highest top speed here. City's top speed and acceleration are only matched by the new Verna but with a diesel engine. It takes 0.2 seconds more than the Honda to hit 100kmph and registers the exactly same top speed. 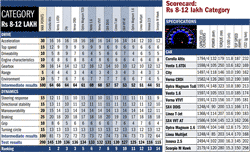 Scorecard: Rs 8-12 lakh
Click here to Enlarge
The Toyota Corolla Altis has the biggest petrol engine here, but still doesnt help its cause when it comes to driveability. Also, one does need to often shift the Corolla when you really want to drive it hard, but with a gearbox that shifts without complain, it's not much of a bother.

The Altis didn't do well in the handling test because of its engine, but good dynamics saves a few points. It has the best steering response, and the best directional stability-be it on straight line or through a quick succession of corners. Great grip and powerful braking also helps the Altis beat other contenders.

The City has a great engine too. If nothing else, it accelerates from standstill with determined vigour. Thanks to nicely spaced out gear ratios, driveability is top class too. In fact, the City scores as high as the Corolla on drive, but fails to match the larger Toyota's dynamic prowess, especially directional stability and steering response.

Sharing third place with the City is the new kid on the block, the Verna diesel. As mentioned above, it matches the Honda on drive quite well, and it's the same story on dynamics. Of course, both score for different reasons. The City has better steering response, while the Verna feels more stable in a straight line. It's a close call at the finish line for these two.

The Skoda Laura is not only the best driver's car in this segment, it is also the best handler for those who love driving.
Between 12-18 lakh

Like the Corolla Altis' win didn't come as a surprise in the previous price bracket, the Skoda Laura's victory here is equally in line with expectations. The Skoda has been frequently commended for its sound mechanicals.

The surprise however, was the petrol powered manual equalling the DSG-equipped diesel engine version on points. Skoda Laura2.OTD DSG
Now, the turbo-charged 1.8-litre petrol powerhouse manages a quicker 0-100kmph time than the diesel and a higher top speed as well. That the diesel, with its state-of-the-art dual clutch gearbox, manages quicker roll on times was a given, but what surprised is the similar range and more concern for the environment that the petrol showed compared with the diesel.

There's obviously no difference between the two in terms of dynamics, apart from the fact that the diesel manages to register shorter braking distances compared to the petrol. 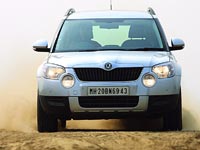 Skoda Yeti 2.OTDI
In third place is yet another Skoda and this one too is largely based on the same platform as the Laura. It's called the Yeti and is classified as an SUV. Not the large, lazy and lumbering old school kind, but a small, lithe and car-like modern SUV.

It has the same engine as the diesel Laura but it comes with a 6-speed manual gearbox. Add to it an intelligent all time 4-wheel drive system, equally good braking and a shorter turning circle and the Yeti even manages to beat both Laura versions on dynamics.

Scorecard: Rs 12-18 lakh
Click here to Enlarge
Next up is the Corolla Altis and bringing up fifth place is the Cruze with the manual gearbox. Now, the Cruze has a superb engine, outclassing both the Yeti and the Corolla Altis on drive, but falls short a bit on dynamics.

The steering response, stability and braking are all decent but it fails to even match the top four on any of these counts.

Past the fifth rank, and the Laura and the Corolla make a comeback. The Laura 2-litre diesel, albeit with a manual transmission and lower power and torque ratings compared with the DSG equipped car. The Corolla too is a diesel, with just a 1.4-litre engine unit, but Toyota has done well with the gearing to harness great potential from the engine.