Choose the best car you can buy in your budget

We rate all the cars currently available in the market to help you choose the one that suits your budget and requirements.

Auto Build
We're back. Once again you get the benefit of an elaborate exercise to help you zero in on the car that suits your taste and, most importantly, your budget. The same criteria as last time have been used to rank the best buys in each category. Satisfy yourself on the very same range of parameters to make up your mind on which car to buy. We have tested, measured and rated nearly every car sold in the market and the best have made the list. An elaborate scorecard has been drawn for every model available in each category. The process was simple, we have divided the test into six price categories parts and the best five buys in each section have been ranked. Unlike last time, we have dropped variants of the same car if they finished among the top five to give you a better range of choice. 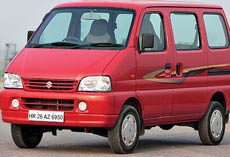 Hyundai's old workhorse, the Santro, in its base trim and the Eeco, again the base version, emerge as the top buys under Rs 3 lakh. Of course, both cars might be short on features compared with the likes of the Nano LX, but these more than make up for it in other areas, including build quality and dynamics (in the Santro's case) and space and a bigger car feel (in the Eeco's case). The Indica Xeta, which, finishes third, does so more or less for the same attributes. In fact, its ride and handling for a car under Rs 3 lakh is quite outstanding.

One of the most important classes among small cars, the Rs 3-4 lakh category, accounts for the most number of first buys. The best buy in this budget is the Ford Figo, and for good reason. It's phenomenally spacious for a small car, has good dynamics and ride quality and, in the base 1.2 Lxi trim, is priced very well. Figo's 1.2 Exi and Zxi are equally good buys. Next up is the i10 with the 1.1-litre engine and again it's the base D-lite version that offers most bang for the money. The petrol Swift comes in third with the Lxi version making most sense at this price. Diesel vehicles emerge on top in this segment with two of the top three being diesel versions of the Fabia and the Polo. These offer great build quality, superb ride and handling balance and feel more upmarket for their price. The fuel economy and top notch ride and handling also helps. The fact that both deliver great fuel economy, without compromising on driveability, helps their cause even more. Between the two, the Fabia's larger boot and more interior room help it move ahead. In second place is the petrol version of the Fabia, but again in the base Classic trim. Coming in fourth place is the petrol i20. If you have between Rs 6 to 8 lakh as your budget, you'd get the most value for your money with the Hyundai i20 in the top-of-the-line Asta version with the options pack, albeit the diesel engine. Besides offering interior room that rivals sedans, the i20 is also comfortable. It has a good ride and is the only car here to sport six airbags. Next in line are the Ford Fiesta and the Skoda Fabia. Like in the previous category, diesel cars reign supreme here. But, if you're insistent on a petrol engine, the best option is the Honda Jazz.

The Corolla Altis diesel, base J version, might have a small engine but thanks to its fuel economy, driveability and space, it dislodges the Ford Fiesta to be the best buy in the Rs 8-12 lakh bracket. As for the Fiesta, it's the diesel version that is among the top three. The Corolla also comes in at third place with the 1.8-litre petrol engine. It leads other diesel powered cars, including the Vento and the Optra. It is the best buy among petrols, which include the Vento, the City and the SX4. It's also costlier, but then you get a superior product.

Skoda Laura
BEST BUY Rs 12-18 lakhThe Skoda Laura had been voted the best you can buy in its segment over and again. And it's a repeat with it emerging as the best buy in the Rs 12-18 lakh bracket once again. Interestingly, this price segment is mostly comprised of the Laura and its customary rivals such as the Altis, Civic, Cruze and even the Sonata. What's also of interest is that it's the top-of-the-line Laura L&K that emerges as the best buy. More so, because the L&K is significantly more expensive than the rest.