Sam Abraham introduces new products to help you zero in on those that could offer value for money.

Sam Abraham introduces new products to help you zero in on those that could offer value for money. The successor of the EOS 60D, it comes with the latest Dual Pixel CMOS auto focus system (detailed analysis by DP Review-bit.ly/12DWBEL), the DIGIC 5+ image processor and a 20.2 megapixel CMOS sensor. Combined with an ISO range of 100-12800, the EOS 70D should be able to perform admirably in most light conditions. The 70D has a three-inch Clear View LCD touchscreen monitor with anti-reflection coating as well. The body is made of plastic and closely resembles the 60D. This one is for the connoisseur. Samsung's first Ultra High Definition (UHD), or 4K, TV reportedly has a resolution of 3840x2160 pixels, four times that of a full-HD screen. It runs on a quad-core processor, comes with wi-fi, support for installable applications and a camera for apps such as Skype. It also features the new 'One Connect' solution to eliminate cable clutter with a single cable. Of course, all of this comes with a hefty price tag. 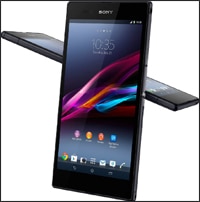 Sony's premium 'phablet', the Xperia Z Ultra has a display resolution of 1920x1080 pixels (344ppi pixel density). The 6.4-inch mammoth runs on a 2.2GHz quad-core Snapdragon 800 processor paired with 2GB RAM. You also get 16GB internal storage (microSD card expansion up to 64GB). The primary camera is 8MP, while a 2MP unit is placed in the front. Just like the Z, it is resistant to water and dust. The Z Ultra is powered by a 3,050mAh battery.

FEATURES
>> Most compact turbo-petrol engine in the country

Ford EcoSport brings competition to the compact utility segment with aggressive pricing. The petrol engine is a compact 999cc, three-cylinder, turbocharged unit, while the diesel engine is the same as the one in the Ford Fiesta. The EcoSport is the first car in its class to offer voice-activated incar connectivity system, called SYNC, co-developed with Microsoft. The system enables drivers to do tasks such as choose music and make calls using voice commands, ensuring the driver won't be distracted from the road. It also has a Smart Keyless Entry. There will be ten variants across four trims-three fuel-efficient engine options in manual and a petrol automatic. You can also choose from seven colours. The Transformer Book TX300 is a 13.3-inch notebook with a detachable Full HD Windows 8 tablet. It is powered by an Intel Core i5 processor, which sets it apart from other Atom hybrids. There are separate storages for the notebook and tablet with a high-capacity hard drive (500GB) and an Ultra-fast SSD (128GB) storage. Asus claims a battery life of five hours (laptop) and eight hours (tablet). The only drawback is that it's still running third-generation processors considering the price. Intel's latest processors released recently boast of vastly improved battery life.