Companies in the auto, IT and real estate sectors are likely to show a strong sequential earnings trend. 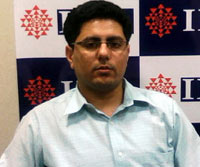 Despite a bad monsoon and an insipid budget, the Indian equity markets have had yet another quarter of good performance. This is in line with the positive momentum seen in global markets and we believe that the rally will gain further steam in the coming months.

The driving forces for the current rally have been liquidity and the increased risk appetite of market players. Equity valuations do not exist in isolation. In 2006-7, extremely low levels of risk aversion led to a re-rating of all asset classes. In the current environment too, global risk aversion has fallen sharply. With risk-free rates near zero in most developed markets, the reduced risk aversion has driven capital flows to risky assets, causing a ferocious rally in several asset classes.

The improvement in the fundamentals of the economy and companies has aided the recovery. The Index of Industrial Production is showing firm signs of revival. Sequential volume growth for sectors like auto and cement has been stronger than in normal times, property prices have started to reflate and the pace of decline in exports has abated. The current account has shown distinct improvement and tax collections are displaying resilience.

The balance sheets of companies are in a better shape, with Indian companies raising $12 billion through equity and quasiequity instruments in the first half of 2009-10. Plans to raise capital worth $18 billion have already been announced and assuming that even half of them go through, the total likely capital raised in 2009-10 will be $21 billion. This is much lower than what was raised in 2007-8 ($33 billion), but a staggering 10 times year-on-year (YoY) growth. Also, companies have used the downturn to reduce their cost structures.

While there have been concerns about valuations, it cannot be considered without taking into account the declining price of risk and the positive change in earnings momentum. On the 2010-11 earnings estimates, the Sensex is trading 15-19 times the price-to-earnings ratio. We are likely to see an upward bias in the earnings estimates and this will be supportive of valuations at the higher end of the historical trading band.

The near-term trend will, however, be determined by the earnings season. Companies in the auto, IT and real estate sectors are likely to show a strong sequential trend, though the YoY figures would remain subdued. We expect core earnings to continue to improve and EBITDA growth to be higher than revenue growth during the quarter, a first in at least six quarters, because of a revival in the domestic economy over the past two-three months.

The order flow has improved, especially in infrastructure (up to Rs 500 billion worth of order flow in roads is likely over the next six months), which should reflect in the results for the next couple of quarters. On the negative side, cement prices have started falling and banks are likely to report contraction in net interest margins. The top players for this earnings season are auto, IT and infrastructure, whereas cement, telecom and metals are likely to disappoint.