News
Magazine
Stocks
ETF of PSU firms may be heavy on energy, power and banking sectors

ETF of PSU firms may be heavy on energy, power and banking sectors

The government is planning to launch an exchange-traded fund, or ETF, comprising government-owned listed companies, to pare stakes in public sector undertakings.

People watch the display screen on the facade of the Bombay Stock Exchange in Mumbai. Photo: AP
Dipak Mondal / Money Today
What if you could take exposure to some of the country's largest government-owned companies such as ONGC, Coal India, NTPC and IOC by investing a small amount?

This will soon be possible as the government is planning to launch an exchange-traded fund , or ETF, comprising government-owned listed companies, with help from a mutual fund company.

The Vijay Kelkar Committee on fiscal consolidation had recommended creation of such an ETF to pare government stakes in public sector undertakings or PSUs. The government expects to raise Rs 30,000 crore disinvestment in the current financial year. It holds more than 75% stake in 25 PSUs and over 90% in a dozen PSUs.

We look at the merits of investing in an ETF comprising only public sector companies.

The committee has observed that the list of government-owned companies include a few which are not regularly traded or whose financial performance is not very good. Therefore, the ETF should initially comprise only companies with good track record.

At present, over 50 companies owned by the government are listed on exchanges. These include some of the largest companies in terms of market capitalisation such as ONGC, Coal India, State Bank of India, IOC, NTPC and MMTC. Some are part of the country's main stock indices-the Sensex and the Nifty.

If the proposed ETF is based on market cap and profitability, will it be well-diversified?

"Chances are they (the government) will try and make it market cap-based so that it tracks a broadly-traded index. So, banking will have similar weight as in the Nifty," says Raj Majumder, CEO, Auroch Investment Managers.

"The ETF is still being constructed and hence the specific benefits will be known only after it is designed," says Vineet Arora, executive vice-president, ICICI Securities. ICICI Securities is advising the government on the composition of the ETF. 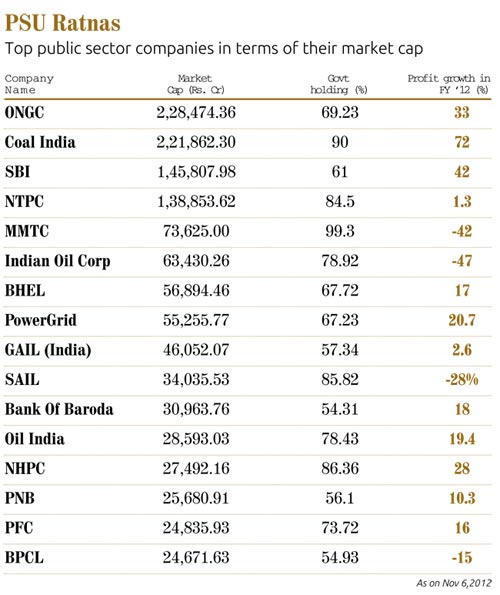 ETFs are low-cost, low-risk investment options and allow investors to take exposure to a number of stocks by paying a small amount.

"Since an ETF is listed on an exchange, distribution costs are much lower and the reach wider. These savings are passed on to investors in the form of lower costs. Further, the structure reduces collection, disbursement and other processing charges," says the Kelkar Committee report.

Another plus is that investors get to invest on a real-time basis and not at the end of the day, as in case of mutual funds.

Since the government is a majority stakeholder, the performance of PSUs may at times suffer from political interference through tools such as subsidy, loan waiver, etc.

In the past, arbitrary government policies have led to losses. Last year, Coal India hiked prices on a par with global prices. However, the government forced a rollback in January this year.

However, on the positive side, many of these are market leaders or the only players in their sectors. Coal India is the only coal manufacturer in India. Government companies have virtual monopoly in the oil marketing business. In power and banking, too, PSUs have a significant market share.

It depends on the composition of the ETF and the process (free-float or market-cap based weights) used in creating it. PSU companies have inherent risks such as political interference and inefficiency. While a few, owing to their size and monopoly, may offer a good valuation, not all have shown steady performance in the past.