Liquor stocks to give steady returns this year as well

Be a little patient though, as experts say the sector is set to do well overall due to soaring demand for beer and Indian made foreign liquor.

PHOTO: Reuters
Rahul Oberoi/Money Today
Those who raised a toast after huge returns from stocks of liquor companies in 2012 should be a little patient this year. These stocks, after rising 70% last year on an average, are under pressure since January. United Breweries and Khoday India, for instance, which returned over 140% in 2012, have fallen 21% and 28%, respectively, this year till (April 30).

Most distillery and brewery stocks rose in 2012 due to the buzz over UK's Diageo buying a stake in United Spirits at a rich valuation. But this did not last. "The price of Diageo's open offer disappointed market participants," says Alex Mathews, head of research, Geojit BNP Paribas Financial Services.

In November 2012, Diageo had struck a deal to pick up a 27.4% stake in United Spirits by buying shares from promoters and subscribing to fresh equity. It was to buy another 26% from the public. The open offer, which closed in April, was unsuccessful, as the price offered was less than the stock's market price.

Experts say the recent fall is a blip and the sector is set to do well overall in 2013 due to soaring demand for beer and Indian made foreign liquor (IMFL). Alcohol consumption in India, they argue, is low compared to other countries. This, they say, will change fast as middle-class incomes rise.

"We estimate that consumption of IMFL will rise at a healthy compounded annual growth rate, or CAGR, of 12% over the next five years. The demand for beer is likely to grow 15% a year. Southern states will continue to be big consumers of both," says Parag Thakker, director, Tathastu Advisory.

Weak Pricing Power:
Liquor prices are approved by state governments for the full year. Thus, companies can change prices only once a year, irrespective of the rise in prices of inputs. The sector also faces progressive taxation; the tax rate goes up as the taxable base increases. States in which government controls the liquor distribution network account for 70% consumption. As a result, liquor companies do not have much pricing power. "Low pricing power in the face of volatile raw material prices is a major concern," says AK Prabhakar, senior vice president and head of equity research (retail), Anand Rathi Financial Services.

Inter-state transfer fee on molasses:
Almost 90-95% IMFL is produced from molasses. Molasses is a byproduct of extraction of sugar from sugarcane. Maharashtra and Uttar Pradesh account for more than 50% sugarcane produced in India. However, most states levy a tax on "import" of molasses. This lowers the profitability of liquor companies.

Raw material cost:
Prices of molasses and glass bottles are volatile. In the one year to March 2013, prices of glass bottles have risen 5%. In January, the government increased the price that sugar mills have to pay sugarcane farmers by 23.5% to Rs 210 per 100 kg for the year starting October 2013. The Fair and Remunerative Price, that farmers are guaranteed, was Rs 170 per 100 kg in the 2012-13 marketing year (October-September).

Big liquor companies are richly valued, the reason being fast growth and complex regulations that make entry into the business difficult for others. "The sector will continue to command a premium for at least the next few years. Investors should avoid companies with high debt, weak cash flow and low operating margins," says Vikram Dhawan, director, Equentis Capital.

On April 30, United Breweries, United Spirits and Radico Khaitan shares were at a price-to-earnings, or P/E, ratio of 111.81, 105.31 and 25.14, respectively. A stock is said to be expensive when its P/E ratio is higher than that of industry peers. P/E ratio shows how much the market is willing to pay for the company's earnings for a particular year.

STOCKS YOU CAN BUY

A total of 16 liquor stocks trade on the Bombay Stock Exchange or BSE. The top five, on the basis of market capitalisation or value, are United Spirits, United Breweries, Radico Khaitan, Tilaknagar Industries and Som Distilleries & Breweries.

The company has the second-largest distribution network among liquor companies in India and has made inroads into the armed forces' Canteen Stores Department or CSD. "The company's earnings are driven by its capacity to launch new products and brands that command premium," says Prabhakar.

Alex Mathews of Geojit BNP Paribas is also bullish on the company. "The stock is likely to be an outperformer in the days to come. It has a target of Rs 155 and Rs 179. The company has succeeded in launching a number of new brands," he says. It was trading at Rs 124.90 on April 30. "It can touch Rs 181 by the yearend," says Prabhakar. 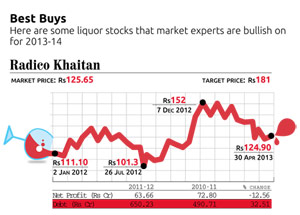 "The company has signed agreements with Pernod Ricard in India. Its brands are doing well. Valuations are attractive. We see the stock at Rs 90-115 in the medium term," says Mathews of Geojit BNP.

"We expect 9% revenue growth and 5% volume growth to continue in the current quarter, assuming no significant increase in levies. The stock can touch Rs 2,350 by the end of the calendar year," says Dhawan of Equentis.