Has the market slide stopped?

Periodic spurts notwithstanding, stock prices are down 25% from their peak. Learn what to do now.Why aren’t you panicky?A tempting opportunityWhy and when to sell stocksFeb 21 cover story: Riding the market swing

>Why and when to sell stocks
>Will the sky fall on our heads?
>A tempting opportunity
>Why aren’t you panicky?
>Bear-market portfolio

Every action, said Newton, has an equal and opposite reaction. So, for every peak in the stock market, there must be a trough. Which has been happening with alarming frequency over the past few months. The result has been an extraordinarily volatile period. Through it, you, the investor, have stayed cool. You’ve often used the lows to buy, and then made a killing on the highs. But it looks like those days are ending.

Call it a downturn, a crash or the beginning of a bear market, the result is the same: a 25% fall from the market’s peak. The strategies you used to combat volatility might not work; this market calls for belt-tightening measures. And investors are getting anxious, if not worried.

Who better to assuage their anxieties than the heads of prominent brokerages and mutual funds? We asked five questions to a panel of market experts. Their strategies might differ, but they are unanimous in telling investors that there is definitely no need to panic. But then we found that while investors were justifiably concerned, they were nowhere near panic. We spoke to a cross-section of investors and, as always, their responses have taught us a thing or two about dealing with downturns.

We delve further into the subject, as Prashant Jain, CIO, HDFC Mutual Fund, discusses market valuations and his take on the current scenario. To complete that picture, our regular columnist, Dipen Sheth, talks of the benefits of sitting on cash. Which brings us to perhaps the most neglected part of investing—selling. Cut your losses early, because, after all, a rupee saved is a rupee earned. And there lies the way to wealth.

Where are the markets headed? Is this the end of the fall?

Consensus of experts is that markets are at or near bottom. Recovery though will be slow and selective.

When it comes to market direction, people often tend to extrapolate into eternity. There is a feeling that now we will keep on falling. I think we have reached an intermediate bottom at around 14000.

I think this is the bottom; in case there is a fall, it could be another 10-15%. That is because we never seem to know when some bad news will hit. There seems to be no sign of an immediate V-shaped recovery pattern.

There’s a global and a domestic dimension to what happened in the market and what could be the trend going forward. Looking at these, I think the market is likely to be in the range of 14500-18500 in the next three months.

The correction is more or less over and unless Nifty closes below its 22 January low of 4450, I think we are heading for a good recovery. In next three months, the Nifty could touch 5200-5400 levels.

Should I buy now or wait for the markets to stabilise?

If you are investing for the long term (at least one year) and in fundamentally good stocks, go ahead and invest.

It’s impossible to time the markets. If you have a long-term perspective, it’s a good idea to enter, as long as you stick to fundamentally strong stocks.

One cannot gauge the bottom of the market to start buying. Right now the investors should review their portfolio and reshuffle if necessary.

My conviction remains that stock market should be for long-term investors. Retail investors can opt for good mutual fund schemes with a long-term perspective.

Investors with strict discipline can buy systematically and in small quantities in the current market. Large-cap companies are better bets.

Timing the market is never advised. The key is to stay invested and average into companies that are fundamentally strong and available at good value.

This is a period for one to start accumulating fundamentally strong stocks for the long term. 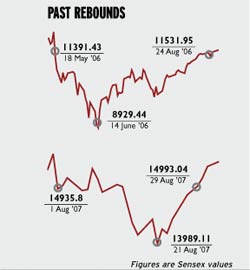 The consensus opinion is that yes, the Sensex will touch 20000 this year. However, this will depend on a host of domestic and global macro-economic factors.

Predicting levels is always hazardous. I think three factors may aid the index’s rise to 20000: a surge of international money flowing into the markets, the Indian corporate sector maintaining its earnings trajectory and continued progress on the domestic macro-policy front.

There is surely a possibility that the Sensex will touch 20000 again. The reasons for the current fall are largely external and hardly internal. The India growth story is intact, and in a worst case scenario, one can expect a growth rate of 8% plus. The only worry is inflation; if it is controlled, a surge is on the cards.

Yes. And it may cross the 20000 levels during the current calendar year provided we have a good monsoon. There should not be any more external shocks, such as high crude oil prices or subprime-related losses.

It is difficult to predict market levels in the short term. But I am confident of seeing the Sensex surge back to 20000 in 2008. This will be due to the return of global liquidity, strong quarterly results by Indian companies, controlled inflation and a reduction in domestic interest rates that will spur consumption.

In the short term, a pull-back rally is expected, and the index could touch a high of 17500 or so. Barring unforeseen negative events, I think the Sensex can attain 20000 levels in 2008. This is likely to be due to attractive valuations, leading to demand.

Yes, the Sensex can reach 20000 if corporate earnings are robust, inflation is under control for a few months, no unpleasant surprises from the US markets, and domestic GDP and IIP numbers are back on track.

Should I average my portfolio as stocks look attractive at these levels?

Yes, averaging is a good strategy, but our experts recommend it only if you know exactly how it works.

Averaging works if the stocks currently held are fundamentally sound. In a bull market, investors tend to accumulate stocks that are fundamentally not sound, but driven by momentum. If that is the case, don’t average.

There are two possibilities that you could consider at such attractive levels (a) realign the portfolio by weeding out the momentum stock and move into fundamentally stronger stocks, and (b) average the cost price of the portfolio. However, do this with care, so that you average the good stocks that will move with the market turnaround.

Don't average for the sake of averaging; if it is a good stock, say a blue chip, add to your exposure. Else, don’t.

The fall can be used to a certain extent to average the cost price. However, one should not be invested fully at any point. The market may react to many factors such as a moderate slowdown in the economy, or inflation. The expected good quarterly results may also propel the market. These opportunities can be used for averaging.

The decision depends on whether share prices of the company were brought down as part of routine profit booking/risk aversion or if it was a function of poor earning prospects. I think an investor can add on declines if companies show tremendous earnings potential, greater competitive advantage and a strategy to mitigate external risks.

Will the past winning stocks and sectors lead the recovery?

Opinion is divided on this one, but there is some consensus that defensive sectors are worth tracking for future gains.

Rotating is a common feature of volatile markets; yesterdays heroes may not be tomorrow’s superstars. But, some earlier sectors will still work, such as power, infrastructure, metals, banking and financial services.

This may not necessarily be the case, though some tactical investing can be undertaken in the previous sectoral leaders (real estate and power utilities) as the bounceback could be impressive. However, tread with caution.

It is important not to just look at the steep fall, but also at the sector. IT and real estate had a steep fall. I would not advise investors to get into these sectors at the moment and suggest sectors like banking instead.

There will be sector rotation. Defensive sectors like pharma, FMCG and agri commodities will do well. One needs to weigh the near-term cash generation ability of the companies, and high dividend yield can be a good indicator.

Sectoral allocation will see a change in next couple of months. Banking, telecom, FMCG, pharma, engineering and infrastructure construction sectors are my picks for next six-nine months.