India story is over, for now

As the global financial turmoil spreads, the NAVs of both portfolios hit all-time lows, I weed out some more losers.

with the Sensex well below 9,000, we have reached a point in the investing cycle when grown men are bawling like children on Dalal Street (and the children are missing, perhaps never to be found again!). The confluence of negatives, it would seem, threatens to disrupt our lives, not just our wallets. Entire countries, not just businesses, are allegedly running into the ground, if doomsayers are to be believed.

In my previous portfolio review, I had, in a lighter vein, mentioned the irony of using ‘Zoom’ as an appropriate brand name for our mid-caporiented portfolio. Today, in all seriousness, I must confess that I am at a loss to justify why we should still refer to our twin positions as ‘models’ or even as ‘portfolios’! Safe Wealth has clocked a NAV of Rs 9.16 as on 19 November, while Wealth Zoom has limped to Rs 7.26. Both the portfolios have lost around 6% over the past fortnight compared with the Nifty, which shed 12%.

In such difficult times, it helps to clear our mental blackboards and start afresh. Let’s begin with an assessment of where we are at present. 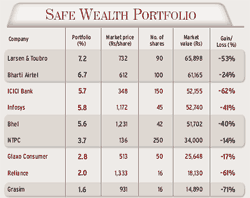 Click here to Enlarge
The India story is over, at least for now: Led by global tightening, India’s dream run of four straight years of economic growth (aided by buoyant credit expansion) has ended, at least for the time being. Inflation peaked at 12% (following commodity spikes), and is now at 9% as commodities cool off. As the elections approach, an administrative paralysis is visible. Ironically, it coincides with greater challenges.

Global worries: The credit squeeze has spilled over globally and threatens to push major economies, led by the US, Eurozone and Japan, into recession. Global economic growth is expected to fall to its lowest level in five years. The BRICS economies are teetering on the brink of hard landings— Brazil and Russia are hit by falling commodity prices, while China and India face a severe export slowdown and capital outflows. Policy actions are not clear enough to conclude on their growth rates.

India in 2008: The BSE Sensex is down by about 55% from its January peak. Not surprisingly, the Midcap index is down 70%. Key stock performance is even worse in many sectors.

Driven mostly by global deleveraging, the FII outflows have taken the wind out of the sails! The outflows by FIIs in 2008-9 have crossed Rs 40,000 crore compared with the inflows of Rs 1,20,000 crore in the preceding three years. Adjusting for rupee depreciation, the outflows work out even higher.

The growth expectations, from the economy as well as from companies, were more than the sustainable levels, and are being revised almost weekly now as the global economy shudders to a halt.

Click here to Enlarge
The stocks and investment themes characterised by financial leverage, commodity exposure, real estate and cyclical businesses have cracked continuously through 2008 and are still not out of the woods.

How do we now run the model portfolios? Global financial problems will take more time to unravel, unwind and be solved. Expect further purse-tightening, deleveraging, and, perhaps, an extended period of indifferent economic health across America, Eurozone and Japan. A shift in global economic power is likely to play out, albeit slowly.

Moneybags (Middle Eastern, Russian and Chinese private and government wealth, substantially invested in the US treasuries) will seek growth and investment opportunities, especially if the dollar falls, or threatens to go into a multiyear fall. Home opportunities will be the first to be lapped up, but India and China, with their demographic profile, are obvious ‘monster opportunities’ some years in the making now. Quality businesses in these economies are likely to get noticed by investors who ‘hold the strings’, especially after the recent fall.

Our MTM losses: There’s not much point in drawing up fresh buying lists when markets are in a bear hug. The pain gets exacerbated every time some not-so-logical selling happens on our dream counters. Sellers run the risk of getting ‘traded out’ at psychological bottoms today.

Get out when the scene is bad: We have reconsidered some of our convictions and have exited the deadwood before it sinks further. Cash raised painfully like this will ensure that we are choosier with our money when we begin to re-deploy. That’s still some time away and we will have to wait very patiently.

Business competence, franchise and pricing power returned as drivers of financial performance. Does this signal the re-emergence of value as opposed to growth as the central theme of investing in Indian equities? We don’t think growth and value are ‘mutually exclusive’. I promise to draw up yet another list; this one is likely to be the mother of all previous efforts.

I think Dipen Sheth’s real test as a fund manager begins now when he starts buying the stocks. Any wrong choice at this stage will undo all the hard work done during the past few months.
— Pramod T. Palathinkal

The fund manager’s decision to prune the junk is appreciable. The following quote by Warren Buffett is very fitting: “A good managerial record is far more a function of what business boat you get into than it is of how effectively you row. Should you find yourself in a chronically leaking boat, energy devoted to changing vessels is likely to be more productive than energy devoted to patching leaks.”
— Lakshmikanth

Frankly speaking, today there are hardly any companies that can sustain growth and are worth investing, except for a few sacred gems like SBI, PNB, L&T, Bhel and HDFC. This list has now shrunk to 10-12. I feel that a lot of the medium-sized companies will vanish and only the top few and bottom few will be able to survive.
— Anuj Rastogi

Disclaimer: Model portfolios are based on the independent opinion of Dipen Sheth, head of the research team at Wealth Management Advisory Services. They do not reflect the opinion of the firm. They are for reference and information of readers. The firm is not soliciting any action based on the portfolios.