Experts say heavy research and development will allow oil and gas companies to bring down the cost of doing business. If the rupee remains stable over the next 12 months, the sector could be in for a turnaround.

The oil and gas sector is always in the news. The latest reason is reform measures taken by the government, the recent being approval to a formula that will nearly double gas prices from April 1.

The beneficiaries will be gas producers ONGC, Oil India and Reliance Industries or RIL.

However, Prayesh Jain, assistant vice president, research, IIFL, says that the benefit for ONGC and Oil India is clouded by the uncertainty around prices at which they will be asked to supply gas to power and fertiliser plants. For RIL, too, the gains are uncertain, as it is involved in a tiff with the government over applicability of the new formula to gas it was supposed to produce earlier but could not.

Some oil marketing companies may also benefit as they have to bear a part of the fuelsubsidy burden every year.

But higher gas prices will definitely squeeze margins of gas consumers and marketers such as GAIL and IGL.

Sanjeev Panda, research analyst, Sharekhan, says, "The gas price increase will benefit gas producing companies such as ONGC, Oil India and RIL. However, the full benefit may go to private players, (such as RIL), while government upstream companies may not gain as they have the responsibility of bearing a part of the fuel subsidy burden."

Moreover, regular increases in diesel prices show that the government is attacking the problem of oil companies' losses. In the past three years, diesel prices in New Delhi have jumped 45% and were Rs 54.91 a litre in February 2014 as against Rs 37.75 in February 2011.

Raghu Kumar, co-founder, RKSV, says, "The government is trying to push through reforms that will encourage domestic companies to explore and produce oil and gas." RKSV is an online brokerage.

"The government delayed reforms such as increasing gas/diesel prices and capping the number of subsidised LPG cylinders. This created a lot of uncertainty," says Sumit Pokharna, oil and gas analyst, Kotak Securities. Click here to Enlarge
Other factors were rupee depreciation, which increased the cost of oil imports and, hence, lowered margins, decline in refining margins globally and delays in ramping up production.

From 2014-15, we foresee higher earnings for upstream companies due to rise in gas prices

However, this year, the industry is under a lot of pressure. According to market experts, total under-recoveries in the oil & gas sector in 2013-14 will not be less than the 2012-13 figure of Rs 1,60,000 crore. Under-recoveries are losses suffered by government oil marketing companies for selling fuels below cost.

Also, the rollback of the LPG subsidy reform will put further pressure on government oil companies. The government had first capped the number of subsidised LPG cylinders to six per year. It later raised this to nine, and then to 12, per year.

Bhavesh Chauhan, senior research analyst, oil & gas, Angel Broking, expects muted earnings growth this year. However, from 2014-15, he foresees higher earnings for upstream (producer) companies such as ONGC and RIL due to rise in gas prices from April.

Harshad Borwake, oil & gas analyst, Motilal Oswal Securities, agrees. "No earnings surprise is expected in 2013-14. However, the outlook for 2014-15 and 2015-16 is positive, as we expect earnings to normalise and return ratios to improve meaningfully," he says.

Pokharna of Kotak Securities shares the view. "We are not too optimistic for this year, mainly due to higher subsidy burden and fall in volumes," he says.

India Ratings & Research has a stable outlook on both public and private sector oil and gas companies for 2014-15. The agency expects public sector companies to maintain strong linkages with the government. The existing ratings of private sector oil and gas companies have sufficient headroom to withstand the impact of muted global growth and further moderation in refining margins, it says.

Q. What is under-recovery?
A. Losses suffered by government oil marketing companies for selling fuels below cost.

Market experts expect a turnaround in the next 12 months due to reforms. "Heavy research and development will allow oil and gas companies to bring down the cost of doing business. If the rupee remains stable over the next 12 months, the sector could be in for a turnaround," says Kumar of RKSV.

We believe that the reform process is crucial. Largely, the revised pricing formulas are market-linked, which is a positive. The benefit of the gas price rise will certainly reflect in the books of beneficiary companies in the next 12 months."

The sector is highly regulated. Hence, before investing, one should look at regulatory aspects that have the potential to impact the business. One should also look at capacity addition and production plans as profits in this commoditydriven business depend to a large extent upon volumes.

"In case of downstream (refining & marketing) businesses, keep an eye on under-recoveries, as these can be huge, delayed payment for underrecoveries by the government and working capital position. These are inherent in the business model and, hence, one needs to be cautious, especially with public sector companies."

Market experts are positive on RIL, Cairn India, Oil India and ONGC for the next one year.

1. Cairn India:
Cairn recently got approval to increase production from its Aishwarya field to 20,000 barrels per day.

Since the beginning of the financial year, the stock has risen 14% to Rs 325.80 (on 5 March 2014). Chauhan of Angel Broking sees further upside. "There are various untapped exploratory upsides in Barmer hills in Rajasthan and other fields waiting to be developed which can drive earnings growth in the future. We believe the stock can touch Rs 384 in the next few quarters."

Jain of IIFL is also bullish on Cairn. "A sequential 6% increase in production from the Rajasthan block in October-December 2013 was encouraging. We are hopeful of a further increase in 2014-15. The stock seems to factor in a long-term average crude oil price of $75 per barrel. New discoveries from additional exploration will add value to the company. We find valuation of 5.3 times 2015-16 estimated earnings attractive."

Chauhan of Angel Broking says, "We expect the government to keep raising diesel prices in 2014 and 2015, which is expected to lower the subsidy burden on ONGC and drive earnings from 2014-15. Also, a concrete subsidy-sharing formula could make ONGC's cash flow more predictable. We believe the stock can touch Rs 318." Borwake of Motilal Oswal Securities says, "ONGC is trading at nearly 40% discount to its global peers on the basis of EV/BOE. Timely execution of diesel pricing reforms and increase in gas price could lead to re-rating. The implied dividend yield for 2013-14 is 4%. We believe the stock can touch Rs 387 in the next 12 months."

EV is enterprise value or the cost of acquiring the entire business. BOE is barrels of oil equivalent. So, EV/BOE shows you how much you are paying per barrel of oil.

3. BPCL:
"BPCL is our top pick among oil marketing companies due to the potential of its exploration and production arm. The Kirit Parikh Panel's backing to non-viability of export-parity pricing is a big positive. If the recommendations are implemented, the sector will get a big push due to fall in under-recoveries. Investors can buy BPCL with a target of Rs 447," says Borwake of Motilal Oswal Securities. The stock was at Rs 386.60 on March 5.

4. Reliance Industries:
RIL's core business of refining and petrochemicals is expected to see material value addition over the next three years as new projects start operations. Increase in gas prices will also add to earnings growth. Investments in retail, telecom and shale gas businesses will be value accretive.

Panda of Sharekhan says, "Stronger dollar will continue to help the company improve realisation. The benefit of gas price revision will push up the bottom line. Recent efforts could gradually increase natural gas production from the KG-D6 basin. Also, there are encouraging signs of improvement in shale gas volumes. Incremental petrochemical capacity will also push up earnings." Since the beginning of 2013-14, the stock has risen 3.69%. It was at Rs 806.90 on March 5.

5. Oil India:
The stock fell 7.61% to Rs 470.50 between 1 April 2013 and 5 March 2014. However, Panda of Sharekhan says the benefit of higher gas prices should add to ONGC's bottom line. Moreover, the company is stabilising its operations in Assam (disturbance occurred in April to June 2013); hence, volume could improve over 2013-14. OIL is attractively valued with a very high dividend yield of 6%." 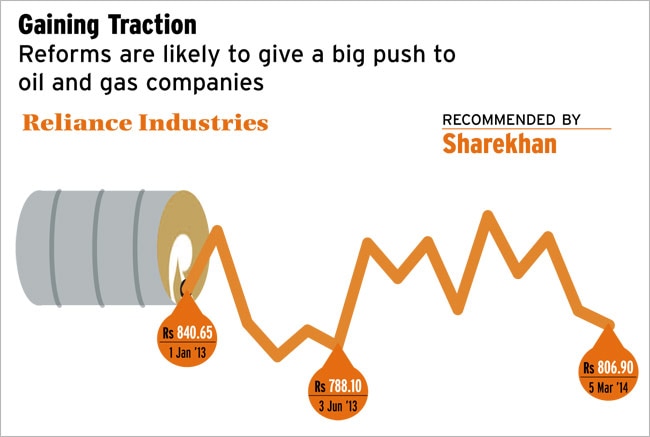