Rajesh Jain, executive vice president and head, retail research, Religare Broking, says, "The index has risen this year due to change in the market sentiment and the stock market rally from January."

There are some good options in the list of 84 companies that have hit the stock market since January 2010 and are trading below their issue price. The stocks on which experts are positive include VA Tech Wabag, Bajaj Corp, IL&FS Transportation Networks, United Bank of India, Oberoi Realty, Man InfraConstruction, Hathway Cable & Datacom, PTC India Financial Services and MOIL.

VA Tech Wabag is a multinational player in the water and waste-water treatment industry operating in 19 countries. Its main focus is on emerging markets. The company is involved in engineering, procurement and construction (EPC) as well as operation and maintenance (O&M) activities.

Operating profit margin in O&M is a decent 20% compared to 10% in EPC. The order book was worth Rs 4,110 crore on June 30, promising good revenue flow for two-three years. The Chennai desalination project, due for completion in the second quarter of 2013-14, be a big contributor to growth in the domestic O&M segment.

Operating profit margin increased to 28.47% from 25.32% in the year-ago period. Margins are expected to improve as the average price of the key raw material, liquid light paraffin, or LLP, fell to Rs 81.43 per kg in the quarter ended September from Rs 85.66 per kg in the same period last year. The company has signed deals to buy LLP at Rs 78.53 per kg in the third quarter and Rs 73 per kg in the fourth quarter. It is aiming for 65% market share in the light hair oil category by 2015-16.

Rakesh Goyal, senior vice president, Bonanza Portfolio, says, "Increase in prices of some products has expanded gross margins. Technically also the stock is showing strength in the near to medium term. It can touch Rs 210-220 in the next few quarters."

ITNL is the largest road build-operate-transfer (BOT) operator in India. Its portfolio comprises 23 projects spanning 11,860 lane km in 16 states. Of these, 12 projects for 5,453 lane km are already operational.

ITNL's BOT portfolio is a healthy mix of annuity and toll-based projects. While annuity projects provide stability, toll projects facilitate revenue growth from traffic and increase in toll rates. The average pending concession period for projects is 18.1 years, ensuring cashflow stability and giving the company an option to bid for more projects.

UBI has more than 1,600 branches and offices and a balance sheet of more than Rs 1.5 lakh crore. The bank has been able to maintain a healthy CASA (current account, saving account) ratio, which was 41.4% between 2004-2005 and 2011-12. In the first quarter of the financial year, it was 40%, the highest among peers, which include UCO Bank, Allahabad Bank, Dena Bank and Syndicate Bank. CASA is a source of low-cost deposits and a sign of higher margins.

The stock touched a 52-week high of Rs 249 on October 18. On November 6, it was at Rs 239.3, Re 0.7 less than the issue price of Rs 240. Market experts are bullish on the stock. Jain of Religare Broking says, "It is looking strong on long-term charts and is trading above all important moving averages. Investors may start accumulating on any dip near Rs 220-225 keeping closing stop-loss at Rs 205 for a target of Rs 280 in the coming months."

Experts say after touching a year's high of 228 in April, the stock has retraced 50% and is on the verge of a bounce-back. "It is strongly placed on medium- and long-term charts. Investors may accumulate the stock around Rs 180-185 keeping Rs 170 as a closing stop-loss for a target of Rs 230 to be achieved in the coming months," says Religare's Jain.

The company hopes to maintain NIM in high single digits this year. It has secured external commercial loans of $76 million from which had taken $51 million till June 30. Another drawdown of $25 million was made in July 2012. It is talking to other lenders for funds, which is expected to reduce its cost of funds in the coming quarters.

At Rs 16 on November 6, the stock is trading at a price-to-book value of 0.75. Net sales have been growing at a compounded annual growth rate of over 120% for the last four years.

"Based on the estimated book value of Rs 23.77 for 2012-13 and targeted price-to-book value of 0.97, we expect the stock to trade at Rs 23," says DK Aggarwal, chairman and managing director, SMC Investments and Advisors.

The company is the largest producer of manganese ore in India. Rajnish Kumar, chief executive officer, Fullerton Securities & Wealth Advisers, says due to increase in spending on infrastructure by the government and manganese ore deficit, MOIL is well-placed to increase sales. The stock has the potential to touch Rs 295 in the next few quarters. 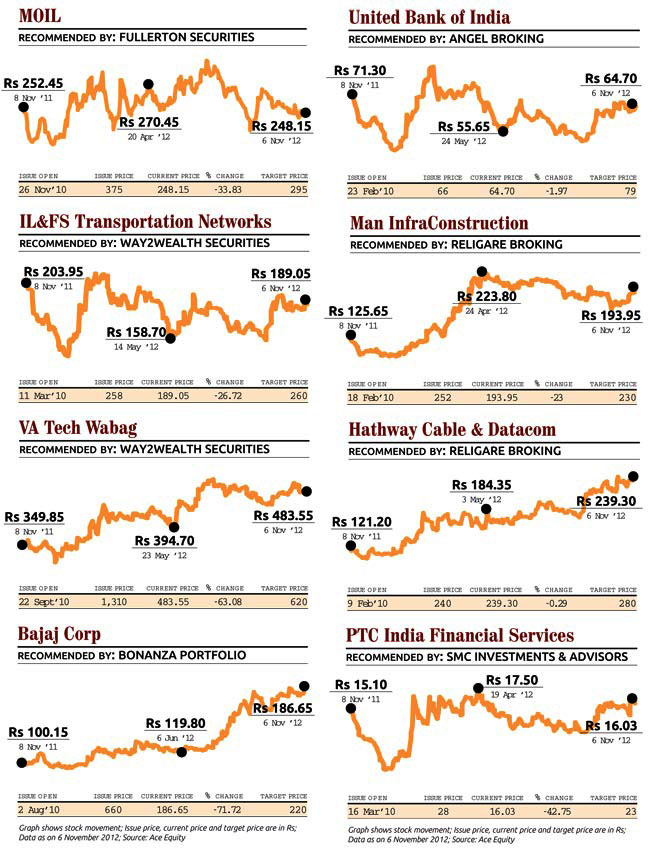 Government actions, the performance of the secondary market and global liquidity hold the key to the IPO market. Current market conditions have become favourable for companies planning IPOs, mainly due to initiatives taken by the government and reforms announced by the market regulator .

Companies such as retail chain Spencer's, the satellite TV broadcast services arm of Videocon and Tata Sky are looking to tap the IPO market. Calyx Chemicals and Pharmaceuticals, Madhya Bharat Agro Products, Bharti Infratel and G B Tools and Forgings are some other companies that have filed draft offer documents with the market regulator since September.

In the last two months, the Sensex has risen more than 6%, as foreign institutional investors put in about Rs 30,000 crore. SMC's Aggarwal says besides the festive season, renewed optimism about the market may give companies a reason to go ahead with IPOs.