Advice to buy is coming in thick and fast. But how do you decide what to buy? Is price the only yardstick? We look at the third-quarter results to find how value also matters.

Buy low and sell high, say the experts. The recent market correction has presented several opportunities to buy low. But will everything that you buy low today sell at a high in future? The answer to that does not depend on price (P) but on the PE, or the price to earnings ratio. Simply speaking, that’s the value of a stock.

Every time there is a change in price, the value of the stock too changes. But January is one of those months when the value of a stock may change without its price changing. That’s because companies announce their quarterly (third quarter in most cases) results this month. With both “P” and “E” in the PE ratio having changed, your stock selection should be based on both these filters.

And honestly, this is less complicated than it sounds. The PE ratio is the most popular (although not the only) measure of value. It is actually a valuation ratio of a company's current share price compared to its per share earnings. The PE is calculated as the company’s market value per share divided by its earnings per share. So, if a company is currently trading at Rs 100 a share and earnings over the last 12 months were Rs 5 per share, the PE ratio for the stock would be 20 (100/5). 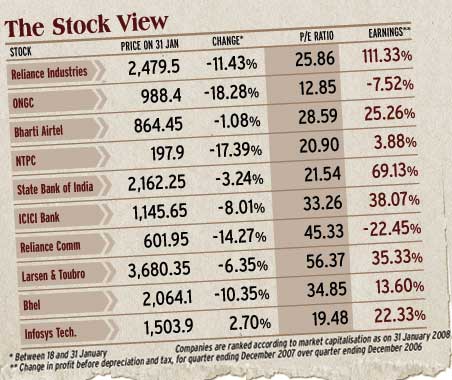 The main reason to look at value rather than price is because when you buy a stock, you are not buying the company's past or present performance; you are buying its future performance. The stock market tends to be an indicator of what people think is going to happen to the economy. Although we are not totally insulated from the US recession, our economy is highly dependent on domestic consumption and is still expected to grow at 8.5%.

What’s important is that the third quarter results of companies also reiterate this view. With results in from a little more than half of the BSE 500 companies, revenues and profits are also on track with an increase of 22% and 37% respectively, over the corresponding period last year. “Earnings growth has been good and in line with expectations,” says Hitesh Agrawal, head of research, Angel Broking. Although there have been no surprises, the growth rate is lower than the previous year, where aggregate earnings had grown by 50%.

“This is primarily due to the higher base of the previous fiscal, and to some extent, relatively higher interest expenses,” says Dipen Shah, vice-president, private client group research, Kotak Securities. According to analysts, this is probably a good time to look at stocks that are trading at a discount to their valuation. Although share prices of companies react differently, there is nearly always a good relation to underlying fundamentals. 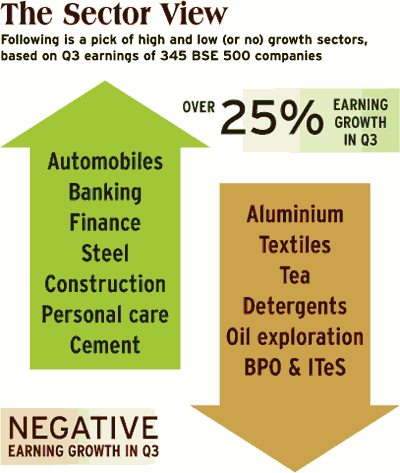 During the fall, the Sensex lost about 20% from its peak whereas the realty, power, oil and gas, and metal index lost upwards of 30%. This is not really surprising, considering the fact that some of the stocks within this space doubled or tripled in a matter of weeks. The realty index, which was quoting at 70 times earnings, was down to 48 times earnings on 22 January. In fact, good companies that were going at high prices might now be had at good prices.

A similar story can be seen unfolding in the power sector. The power index saw its PE multiple drop from 41 times earnings to about 31 times earnings. A major contributor to this index was Reliance Energy. Although the company reported a net profit of Rs 301 crore compared to Rs 201 crore last year, largely due to a higher tax refund, it’s price is down about 19% from its peak. This should not come as a surprise, since the stock has seen its price go up some three times in a matter of weeks, driven by the Reliance Power IPO.

At times like this, it is also a good bet to look for companies with embedded value, which drive valuations. Recent examples include Reliance Energy and Pantaloon India. Both companies hived off their subsidiaries (Reliance Power and Future Capital Holding), which has unlocked huge value for them.

Similarly, a pre-IPO placement valuing Mahindra Holidays at around $1 billion provides significant scope for Mahindra for value unlocking. (The price and value of the Top 10 Sensex stocks is shown in the accompanying table.) “Stocks like Larsen & Toubro, GMR Infrastructure and Jaiprakash Associates, besides being proxy to India’s infrastructure growth story, could unlock further value by listing their subsidiaries in the future,” says Amar Ambani, vice-president (Research), India Infoline. Telecom stocks too, besides offering the growth momentum from their core business, offer ample unlocking opportunities from their tower business. “Idea Cellular, where earnings have grown 100%, Bharti and RCom are better positioned in the sector,” says Agrawal.

Stock broking companies have been hard hit by the meltdown. Both Indiabulls and India Infoline lost about 30% from their peak values. These stocks are directly correlated to the stock market, considering that broking income constitutes 50-70% of their total income. However, in a bull run, they are likely to gain equal ground.

With a 25% increase in trading volume in the previous quarter, the stocks delivered earnings growth of 190% and 260%, respectively, albeit on a lower base. “These companies are expected to do well in future, driven by increasing market volumes, increase in penetration and increase in the basket of products,” says Agrawal. The software sector lost only 5-6% from its peak during this fall and trades at 13-14 times 2009 earnings compared to 26 times trailing PE. But then, IT was the first sector to be hit by worries of a US slowdown and a strengthening rupee. In the third quarter of 2008, most companies in the sector managed to grow revenues by 24-28% compared to the previous year. The only exception was Infosys, which reported weaker-than-expected revenue growth of 15%. However, it managed to deliver a profit growth of 24% along with Satyam, which led the pack with an increase of 28% in net profit.

Considering that the pricing of Tier 1 firms has discounted most negatives, analysts believe that few technology stocks could emerge as value buys at these levels. Among the Sensex companies, banking is another sector where the large caps lost only about 9-10% of their peak value. The sector has witnessed some stellar performances in earnings and has thumbs up from all analysts. Higher loan growth, improved asset quality, controlled expenses and higher investment yields have driven their performances.

India’s largest private sector banks, ICICI Bank and HDFC Bank saw an increase in profit of 35% and 45%, respectively. “Banks will be the largest beneficiaries of the softening in interest rates, which is likely to soften over the next few months,” says Agrawal. “Some of the top picks in this sector are ICICI Bank and Axis Bank. We expect earnings to grow at a CAGR of 30% and at a price/book value of 2.5 times and 4.9 times book 2009-10 we have maintained price targets of Rs 1,508 and Rs 1,270 respectively,” he adds. All said and done, for long earnings growth by corporate India has been above 20-25%.

The inevitable question that comes to mind is whether this growth momentum can be sustained over a long period. Fundamentally, the markets appear attractive, reckon analysts, and earnings momentum is likely to continue. “A return of 20% can be expected from the Sensex in a year’s time from its current levels,” says Ambani. Large caps will continue to grow at a reasonable pace. Among mid caps, a select group will pick up or continue at this pace. “Stocks in banking, construction, power ancillaries [not generation] and telecom are our top value picks,” he adds.

— with inputs from Sameer Bhardwaj