The oil and gas sector is in the news again. The reason is the turmoil in Iraq, which is facing attack by a rebel group, the Islamic State in Iraq and the Levant.

The oil and gas sector is in the news again. The reason is the turmoil in Iraq, which is facing attack by a rebel group, the Islamic State in Iraq and the Levant. Iraq is a key member of the Organization of the Petroleum Exporting Countries (OPEC) and the second-largest supplier of oil to India after Saudi Arabia. India imports 80% of all crude oil that it consumes. This translates into an import of two million barrels per day (mbd) a year; of this, nearly 20% comes from Iraq. Due to the ongoing crisis, Iraq's oil production has fallen by 300,000-400,000 barrels per day. As a result, crude oil prices have risen sharply.

The oil explorers, Cairn India, Oil and Natural Gas Corporation (ONGC) and Reliance Industries, rose 9.8% to Rs 365.45, 32.94% to Rs 423.70 and 9.16% to Rs 1,014.70, respectively, during the period. But for the companies, which were breathing a little easy on account of a fall in under-recoveries in 2013-14, the developments in Iraq have come as a shock. Now, say experts, if the Iraq situation worsens and global crude oil prices go up further, losses of government oil marketing companies, or OMCs, may rise. This will also put pressure on government oil explorers as they have to share the under-recovery burden of OMCs.

Underrecovery is the loss that OMCs make by selling fuels at prices set by the government. A BNP Paribas report released on June 25 said if the situation in Iraq worsens, India's upstream OMCs are at the maximum risk from higher under-recoveries. However, downstream companies should be safer.

"If oil prices average $115 per barrel, with the rupee averaging 62 against the dollar, we estimate 2014-15 underrecoveries at Rs 1.53 lakh crore," says the report. The figure for 2013-14 was Rs 1.4 lakh crore. Upstream companies are engaged in exploration and production of crude oil. The downstream ones are involved in refining, processing and marketing of products derived from crude oil. "The supply from Iraq has fallen drastically. As a result, the price of crude oil has risen, hitting profits. Though revenues are stable, profits have fallen significantly due to rise in costs," says Sakthi Prakash, senior equity research analyst, WealthRays Securities. 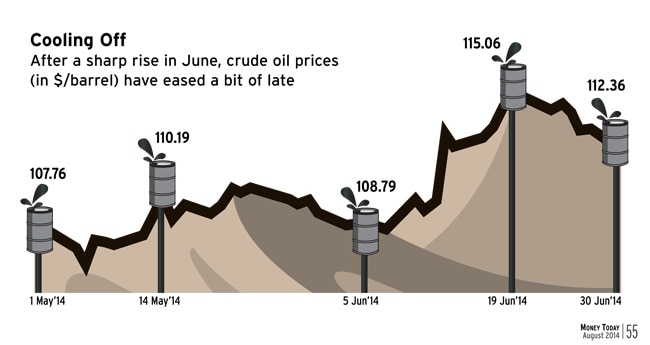 Crude oil prices have risen 6.4% since the start of 2014-15; they were at $112.36 per barrel on June 27. Market experts say this is due to higher demand from the US, rise in imports by China and political unrest in several oil producing countries. The OPEC says that the global oil demand is likely to grow by 1.14 mbd to 91.14 mbd in 2014.

"Crude oil prices are likely to remain at high levels till a resolution of conflicts in oil producing countries," says Arun Singh, senior economist, Dun & Bradstreet India. But Varun Goel, head, portfolio management service, Karvy Stock Broking, says, "We expect brent crude to be largely range-bound at $105-120 per barrel. Any sharp price increase will not sustain due to muted demand growth across the world. Higher shale gas production will also put a downward pressure on prices." Amit Agarwal, senior analyst, institutional equity research, SBICAP Securities, says, "We expect crude oil prices to remain range-bound (+/- 5%). We think that the impact of disruption of oil production in Iraq will be limited."

On June 25, the Cabinet Committee on Economic Affairs deferred the decision to increase natural gas prices by three months. Karthik Rangappa, vice president, education and equity research, Zerodha, a brokerage, says, "With rise in crude oil prices, both subsidy and losses are bound to increase. The decision to defer the increase in natural gas prices will affect the earnings of upstream oil companies. However, the impact could be short-term." The previous government had approved the increase in prices from April 1. The decision could not be implemented due to the model code of conduct for general elections. According to an ICICI Securities report, the deferment will have a short-term impact on earnings of upstream companies such as ONGC, Reliance Industries and Oil India. But it will not impact the longterm view of these stocks.

Vikram Dhawan, director, Equentis Capital, says, "The market is awaiting clarity on government policies on gas pricing and deregulation of diesel and petrol prices. However, in the wake of high inflation and looming poor monsoon, it remains to be seen how soon we see such reforms." Of late, oil companies have been given a lot of room to increase petrol and diesel prices, which will increase their revenues.

Before investing in the oil & gas sector, you should check if the company has invested in exploration projects, as these can be hugely profitable in the long run. You should also keep an eye on the government's pricing policies. Global supply, especially from OPEC countries, is another factor. Reduction in supply increases prices of crude oil and reduces the revenue of oil companies. "People can invest in oil & gas stocks if they expect an inflationary environment as energy prices are a hedge against inflation. Investors must also look out for speculative investments in energy markets as these can drive up prices," says Prakash.

Cairn India: The stock has risen 26% since June 28 last year; it was at Rs 365.45 on June 30 this year. It is trading at a price-to-earnings, or PE, ratio of 8.53. Dhawan of Equentis says Cairn is attractively valued and has over 20% upside before valuations reach close to what peers are trading at. PE ratio shows how much a company is earning relative to its share price. It shows if a stock is overvalued or undervalued.

Oil India: Oil India, a Navratna PSU, is India's secondlargest public sector exploration and production company with presence in 56 blocks in the country. The company reported consolidated revenue of Rs 9,229.75 crore and net profit of Rs 2,941.98 crore in 2013-14. The figures for 2012-13 were Rs 9,545.78 crore and Rs 3,592.05 crore, respectively. The rise in under-recoveries over the past few years led to a rise in the subsidy burden and a decline in net realisation from $60.5 per barrel in 2007-08 to $47.3 per barrel in 2013-14. According to ICICI Securities, there is need for more clarity on subsidy sharing with OMCs. It believes that a new subsidy-sharing mechanism is likely to be announced soon.

Indian Oil Corporation (IOC): It is the largest diesel supplier in India. The stock is among those that have fallen sharply due to the Iraq crisis.

"The government is reluctant to increase fuel prices further. But it will do so in the future. IOC will be the biggest gainer when that happens. The stock is a strong buy with a target of Rs 450-500," says Prakash of Wealthrays Securities. On July 1, it was trading at Rs 343.20.

Oil & Natural Gas Corporation (ONGC): ONGC accounts for 70% of the country's crude oil and natural gas production. It has started a redevelopment project in Mumbai and is expected to play a significant role in other transitional pipeline projects.

Prakash says, "Global crude oil prices are expected to come down after easing of tensions in Iraq, which will benefit ONGC. The stock is expected to rise significantly. It is a strong buy with a target of Rs 550-600 over the next one year." On July 1, it was trading at Rs 422.15. Kishor P Ostwal, chairman and managing director, CNI Research, says, "ONGC will benefit from the proposed gas price increase. With the new government in place, PSU stocks will gain momentum. ONGC considering its asset bandwidth, is the safest gas stock. It can give 25% returns in the next 12 months."