The resurgence of economic activity is driving the demand for crude oil, which could translate to spillover benefits for the pipeline industry.

Who would have thought the stock market would be a slave to fashion? A few months ago, the runways’ fixation with metal accessories prompted a huge surge in metal stocks on D-street. This time, the source of inspiration seems to be drain pipe pants, the craze for Autumn 2009, and it has put the spotlight on the pipeline industry. 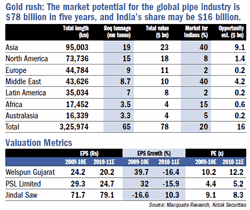 Click here to Enlarge
Seriously though, the interest in the pipeline industry has little to do with fashion and everything to do with economics. With the resurgence of economic activity, the demand for crude oil is bound to go up. This spurt is expected to directly benefit the countries and companies that produce oil. More importantly, the rebound in prices is giving a fresh lease of life to the ancillary industries. According to International Energy Outlook, the demand for energy is expected to witness an average annual growth of 1.5% till 2030. Furthermore, crude oil being a capital-intensive industry, companies have to spend huge sums of money to dig, transport and market oil. In the process, a host of companies that provide rigs, refining services and pipelines for transportation are benefited. By betting on pipelines, particularly, you too can expect to go ka-ching.

According to analysts, 710 pipeline projects are being planned in the next five years and Indian pipe manufacturers collectively hope to increase their production capacities by 17% in two years. While research house Macquarie estimates the opportunity for the global pipeline industry to be $78 billion, domestic brokerage house Ventura pegs it at $117 billion. Also, GAIL, GSPL and other domestic players like Reliance Industries have announced plans for pipeline projects worth over Rs 22,000 crore. The oil and gas industry mostly uses two types of pipes. Welded or submerged arc welded (SAW) pipes are used for transportation of fuels, while seamless pipes are primarily used in exploration and drilling activities. The shift towards cleaner fuels (gas) and new oil & gas findings are the most important factors that are expected to drive the demand for SAW pipes. “The demand for welded pipes remains strong because of the continued need to connect new areas of oil and gas supply to areas of net demand,” says Amit Mishra, an analyst at Macquarie. Not that seamless pipes are a lost cause—the demand is expected to pick up from the second half of 2010. In addition, the replacement of older pipes is being seen as an opportunity for pipe producers. An estimated 50,000 km of pipelines is expected to be replaced in the next five years. Ventura estimates a demand-supply mismatch of one lakh million tonne pipes per annum in the next two years.

Of the total estimated 3.25 lakh km of pipelines to be laid across the globe, North America, Middle East and Asia have bagged the lion’s share. The Indian pipe industry, with its cost advantage in terms of conversion (from steel to pipe moulding), is expected to benefit the most. All factors remaining on track, the stocks of pipe manufacturers are poised to outperform broader markets.

So, which are the companies to invest in? Welspun, Gujarat Stahl Rohren and PSL Ltd are being seen as the best bets in the sector. Welspun’s stock was the worst hit last year due to its higher exposure to export markets. However, with demand recovering and the outlook for the export market improving, the company is expected to turn in a good set of numbers. “Indian pipe companies are trading at a discount of around 50% to their global peers. Welspun is also trading at a discount to its Indian peers, and given its strong earnings growth, robust order book, backward integration and larger share of high-margin orders, the stock warrants a higher multiple premium to its peers,” says Mishra. India Infoline too maintains a buy rating on the stock, with a price target of Rs 314. On the other hand, PSL, a domestic player with a 40% market share, is being recommended for the lower valuations and a strong presence in SAW pipes. At an estimated 2009-10 EPS of Rs 23-29, the stock is trading at a PE of 4.4-7.5 times. The company’s order book of Rs 4,586 crore is 1.2 times more than last year’s revenues.

Whichever way you look at it, pipes are hot, and will remain so at least for the next three years.