Investing in realty stocks? Back companies with low or zero debt

Investors should keep in mind that real estate companies are highly sensitive to interest rates. Any rise in interest rates and inflation affects them adversely. Also, if the economy is in a bad shape, the sector will face a lot of challenges.

It's been a steep ride downhill sine December 2009. Stocks such as Unitech, Indiabulls Real Estate and HDIL have fallen over 70 per cent while DLF and Anant Raj Industries are down 44 per cent and 63 per cent, respectively.

MUST READ: Is commercial realty a great investment option?
The reasons, say market experts, are the fall in demand for houses in the past two years due to rising interest rates and low liquidity. The impact of the overall economic slowdown is clearly visible on real estate stocks, they say.

"Since April 2012, inflation has been moving up sharply. If inflation remains firm, RBI may not reduce interest rates, which will have a negative impact on interest ratesensitive sectors such as real estate," says Alex Mathews, head of research, Geojit BNP Paribas Financial Services.

INDUSTRY OUTLOOK
With little hope that the RBI will cut interest rates further this year and most real estate companies posting poor results, market experts are bearish on the sector for the current financial year.

Companies with a low debt-toequity ratio, focus on using operating cash flow to reduce debt and strong execution can be considered for investment.

Vivek Mahajan, head of research, Aditya Birla Money, says, "The 2011-12 performance of major real estate companies was sluggish. The numbers for 2012-13 will be by and large lacklustre owing to high interest rates and slowdown in economic activity."

FACTORS TO WATCH
Investors should keep in mind that real estate companies are highly sensitive to interest rates. Any rise in interest rates and inflation affects them adversely. Also, if the economy is in a bad shape, the sector will face a lot of challenges. 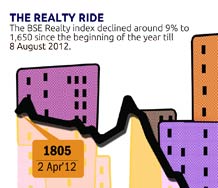 "We expect 2012-13 results to be muted from the earnings perspective with 10 per cent growth," says Kandpal of Karvy Stock Broking. 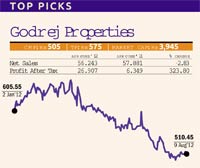 Click here to Enlarge
If you want to invest in some stocks which can give good returns over the next six to 12 months, market experts suggest Oberoi Realty, Mahindra Lifespaces, Sobha Developers and Prestige Estates.

Sobha Developers:
During the first quarter of the ongoing financial year, the company posted a net profit of Rs 46 crore, up 49 per cent from Rs 30 crore in the year-ago quarter. It sold 0.84 million square feet of new space valued at Rs 479 crore. Mathews of Geojit BNP Paribas Financial Services says, "The stock can touch Rs 410 in the medium term." The debt-to-equity ratio is 0.02x. On August 8, the price-toearning ratio was 15.52.

The numbers of real estate companies for 2012-13 will be by and large lacklustre owing to high interest rates and slowdown in economic activity.

For quarter ended June, the net profit rose 323 per cent to Rs 26.9 crore as against Rs 6.3 crore in the same quarter a year ago. The company plans to build townships in Panvel and Mumbai. "The stock has a medium-term target of Rs 575," says Mathews.

According to a research report by Edelweiss Institutional Equities issued in the stock can touch Rs 270 in the next few quarters. On 8 August, it was at Rs 232.70.

"Oberoi Realty and Mahindra Lifespaces are debt-free companies, which enables them to leverage their balance sheets even under tough market conditions. Further, their inventory levels are controlled, which does not put pressure on balance sheets," says Sneha Poddar, research analyst, Sharekhan.

This year till August 8, the stock has risen 63 per cent. At present, the company has price-to-book value and price-to earning ratio of 1.77 and 27.13, respectively.

Kandpal of Karvy is positive on the company. "The stock is attractively priced with the company reporting strong booking in new projects. It can jump around 30 per cent over the next one year."

In the first quarter, the company posted an operating profit of Rs 97.54 crore as against Rs 81.5 crore in the corresponding quarter a year ago.