Snapshots of recommendations from investment houses

Emkay Research believes the market was surprised by good results for Oct-Dec 2006 and sets a revised price target.

These research reports give information and opinions on companies and industries.They are often filled with jargon, which we reluctantly inflict on readers since the excerpts are verbatim. Eight such terms occur here: EBITDA = Earnings Before Interest, Tax, Depreciation,Amortisation, EV = Enterprise Value, EPS = Earnings Per Share, IRR= Internal Rate of Return, PE = Price-Earnings,PAT/PBT = Profit After/ Before Tax,YoY = Year-on-Year

Emkay Research believes the market was surprised by good results for Oct-Dec 2006 and sets a revised price target: Praj For the full year 2006-7, we expect domestic and export revenue contribution to be in the ratio of 65:35. But going ahead we expect the export contribution to go up to 50%. Praj has recently announced the significant order from Cillion, US of aggregate contract value of Rs 170 crore. Praj received this significant order from an existing customer. We believe Praj would witness more big order inflows.

Praj commands 8-10% of world market share and 75% in the domestic market. High crude prices, regulations for blending of ethanol with petrol and environmental issues are expected to drive demand. At current market price of Rs 270, Praj trades at a PE multiple of 21.3. We assign ‘Buy’ with a revised target price of Rs 325.” 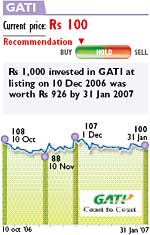 “Gati’s October- December 2006 results were in line with our estimates at Rs 6.9 crore (+21% YoY growth). Revenues grew by 21% YoY to Rs 140 crore during the quarter led by strong growth in express cargo distribution divisions.

Operating margins improved by 10 basis points to 9.1% led by 0.4% improvement in express cargo distribution as it passed on the entire fuel expenses to clients.

Going forward, Gati’s expansion of its warehouses and investments in IT systems are likely to further strengthen its competitive position, and thereby drive its earnings at an estimated 31% CAGR over 2005-6 to 2007-8. The stock currently trades at 17.1 times 2007- 8 earnings.

We believe valuations are attractive considering its leadership position in express cargo business coupled with the strong growth momentum and high earnings visibility. We maintain an ‘Outperformer’ rating on the stock.” 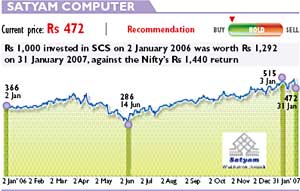 During the quarter, lower personnel expenses of about 1.6% QoQ coupled with double digit growth in offshore revenues led to the improvement in EBITDA margins by 2.1% QoQ, highest across the past six quarters, leading to a 13.1% QoQ increase in EBITDA at Rs 410 crore. A steady pace of client addition with an increasing number of clients being migrated in the $1-5 million category augurs well. Though the growth rate in the top five client category has been slightly volatile over the past two-three quarters, the top 6-10 client category has been ramping up well.

The company added 34 new clients and the total number of active clients now stands at 523. The number of customers with revenue contribution of $1 million-plus stands at 164, up from 154 in the second quarter and 142 in the third quarter of 2005-6. Those clients contributing over $5 million remained steady at 54 in the third quarter, 2006-7 compared to 49 in the corresponding quarter, 2005-6. Enam Securities sees early signs of a turnaround in ING Vyasa:  “ING Vysya Bank is likely to stage a turnaround after a relatively disappointing performance in the last 3-4 years. Most operational issues seem to be getting addressed and the bank is now rejuvenated to take off from what we feel is a reasonably strong platform in a sanguine environment for the banking business. We believe ING’s commitment to the bank is increasing as is reflected in the appointment of the new MD and CEO, Vaughn Richtor. Even the second-level management has been revamped. With this, the bank now has a top class management team capable of staging a turnaround.

The bank operates on a reasonably high net interest margin (NIM) of 3-3.5%. However, its costto- asset ratio at about 3% is 80-100 basis points higher than the industry average. High cost-to-asset ratio is largely on account of underleveraged branches. Asset per branch for the bank is currently around one-third of peers.

However, as 395-odd branches start leveraging and asset growth picks up, we expect cost-to-asset ratio to improve. Higher focus on current and savings accounts should help sustain NIM. We expect assets to grow at a CAGR 23% during 2007-9 (after a CAGR of 11% for the last five years). Net profit is projected to grow at a higher rate of 36% till 2008-9, driven by stable NIM and improving cost/asset ratio.

While the improvement in profit parameters will be time consuming, we believe that increased visibility will help the stock get rerated. At 1.3 times the 2007-8 book value, the stock is one of the cheapest among private banks. We are initiating coverage with an ‘Outperformer’ rating.”