MONEY TODAY portfolios are for investors in stocks, not traders. And investors can overlook the current volatility, at least for the time being, says Dipen Sheth.

Volatility. Over the past two weeks, it’s this one word that has the fund managers across the world running for cover. And like markets across the globe, Dalal Street has suffered its share of big zigzag movements that threaten to spoil the party for punters.

As portfolio managers for you, we would certainly not like to be clubbed with punters, whose leveraged positions serve to magnify their earnings (and losses).

We try not react to prices, fund flows, liquidity concerns and subprime horror stories as much as we do to fundamental changes that these or other factors may bring to the businesses that we have invested in. It must be said that all factors that went into the bull case for Indian equities over the past three years are still intact.

Here is our portfolio thought for the week: we are investors in businesses, so we will choose not to worry about the (temporary?) lack of punting firepower. The idea to take a roughly 70% exposure to begin with was merely to average out the entry into our model picks, so we’ll use some more cash this fortnight. We’ll further tweak the rules this time, choosing alternate Wednesdays for transactions as well as NAV calculations. This time around, markets were closed on 15 August, so we have settled for Tuesday instead.

Here’s our action set for the SAFE WEALTH portfolio:

And here’s what we are going to do with the WEALTH ZOOM portfolio: 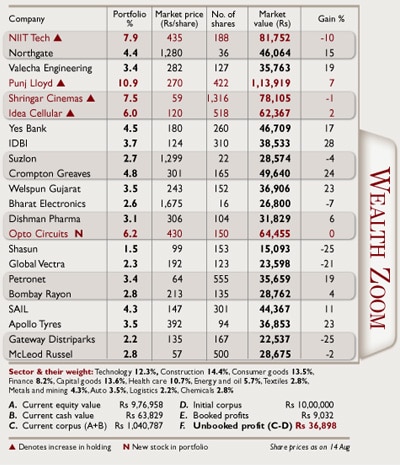 A number of you have written for advice on your existing portfolios. For them (and all the others): SAFE WEALTH and WEALTH ZOOM are our constant, continuous and balanced portfolios that are meant to work for your low- and medium-risk investments in the stock market.