Are stocks of pharmaceutical companies still a safe bet?

Stocks of pharmaceutical companies had a stellar run in 2013. The trend is likely to continue. According to the India Brand Equity Foundation, the main drivers for the industry will be outsourcing and investments by MNCs, spread of health insurance and improved health-care facilities.

However, on the whole, the sector is being driven by several positives that experts believe may keep its pace intact. "Pharmaceutical stocks have been largely driven by companies' strong performance, increase in free cash flows, bright outlook, particularly in the US market, and valuation rerating," says Sriram Rathi, analyst (pharma), Anand Rathi Institutional Research.

Rakesh Goyal, senior vice president, Bonanza Portfolio, says that the expanding global footprint of Indian pharma companies will help them in the long run. "Pharma companies are expanding presence worldwide through new launches in generics markets, which is bringing them healthy margins. As US markets show signs of revival, investors are becoming more optimistic that the companies will be more profitable in the coming quarters," he says.

A recent report on the sector by Bank of America-Merrill Lynch (Bofa-ML) predicts 26% core sales growth in the third quarter of 2013-14. "We expect growth momentum for the pharmaceutical universe to sustain with 26% core sales growth, 37% Ebitda growth and 40% rise in profit after tax or PAT. Revenue growth will largely be driven by continued momentum in the US, strong growth in the rest of the world and higher currency realisation (up 14% yearon-year). Strong margin traction will also drive bottom-line growth during the quarter," said the report.

Ebitda, or operating profit, is earnings before interest, tax, depreciation and amortisation. BoA-ML sees recovery in the domestic market as well. "On the domestic front, after two quarters of dismal performance due to trade channel disturbances, we see some recovery in volume with double-digit growth expected for the quarter. Core Ebitda margins are likely to expand by 180 basis points or bps to 23.8%, driven by higher contribution from niche launches, improved product mix and currency gains," it said.

That the Indian pharmaceutical sector is on a strong footing has also been endorsed by global consultancy McKinsey & Co, which says that the sector could grow to $55 billion by 2020. Steady growth took the market to $18 billion in 2012 from $12.6 billion in 2009. Mckinsey says the sector has the potential to reach $70 billion by 2020 provided the industry puts "super-normal efforts."

With the industry having a large export presence, rupee depreciation has also played a part in lifting bottom lines over the last few quarters. However, experts believe that going forward companies will not be able to derive much benefit on this count. "Rupee depreciation, which was reflected in robust growth of pharma companies in the last eight-nine quarters, especially those who are net exporters, has already played its part. Since the rupee is likely to settle around the current level of 62-63 against the dollar, thanks to scores of remedial measures by the government to address the ballooning current account defecit, we believe the benefit will pan out only for the part of the year as the base advantage for the year-onyear rupee benefit will get ironed out," says Siddhant Khandekar, pharma analyst, ICICIdirect.com.

However, Praful Bohra, senior research analyst, Nirmal Bang Equities, says that rupee depreciation may, in fact, dampen the prospects of companies that have borrowed overseas. "As most Indian generic players are exporters, rupee depreciation is beneficial for them, as their realisations go up. However, many Indian companies hedge currency positions for the medium term (6-18 months), which limits the overall benefits. Further, some companies have borrowed heavily abroad (Cadila, Aurobindo Pharma, Jubilant Life Sciences and Glenmark Pharma) and so rupee depreciation impacts them in a big way," he says.

According to the India Brand Equity Foundation, the main drivers for the industry will be outsourcing and investments by multinational companies, spread of health insurance and improved health-care facilities. This is besides the higher incomes that our growing economy is likely to generate. "Rising household incomes and improving health-care infrastructure/delivery systems will continue to support long-term growth. Increase in demand from emerging markets along with growth in generics, as a large number of patents expire, will drive growth," says Goyal of Bonanza Portfolio. 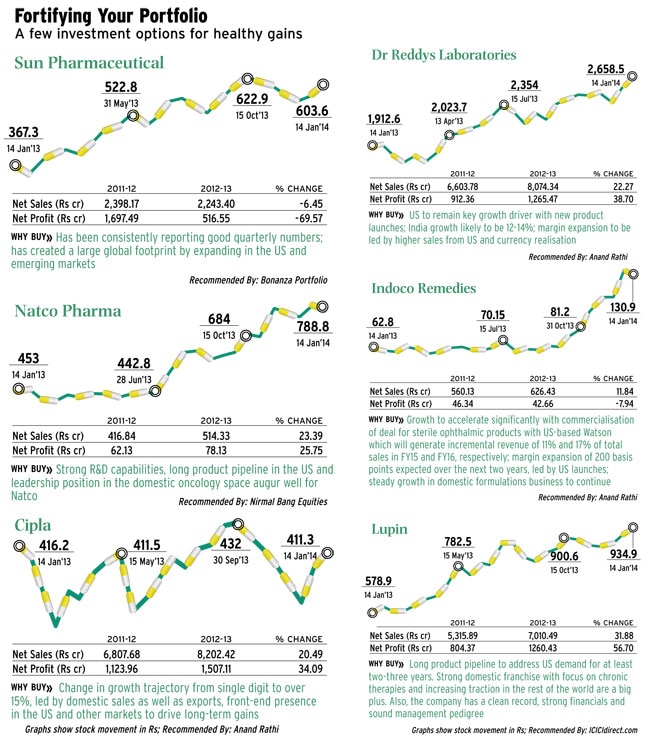 Click here to Enlarge
A reviving global economy will also add to the bottom lines of companies. "The key growth drivers will be approval to new generic products in the US market, expansion of the generics market in Japan, demand for chronic products in India and launches in niche categories such as inhalation, injectables and nasal sprays," says Rathi of Anand Rathi Institutional Research.

However, companies need to overcome hurdles such as competition, price wars and government intervention in pricing. "Challenges will be tougher for companies whose businesses are India-focused. Increasing competitiveness, patent issues and coping with the Drug Price Control Order (DPCO), which prescribes a cap on prices of several essential medicines, are some challenges for the industry.

In 2013, THE bse healthcare index beat the broader market by rising 22%. In comparison, the sensex rose 8% during the year

Following new regulatory and quality norms within the country and globally will also be challenging," says Goyal. The DPCO 2013 caps prices of almost 348 essential drugs. This is likely to impact revenues and margins of companies.

Rathi says the major impact will be on Glaxo, Cipla, Pfizer, Ranbaxy, Cadila and Ipca Laboratories. However, under the DPCO 2013, the companies can increase prices by 10% each year, which is a positive on the sector.

Indian drug companies also need to pull up their socks to avoid adverse action by authorities such as the US Food and Drug Administration (USFDA). The most recent among them is the warning received by Ranbaxy Laboratories over manufacturing practices adopted by its active pharmaceutical ingredient manufacturing factory in Toansa in Punjab.

{blurb}"India, by virtue of being the country with the largest number of USFDA approved formulations facilities apart from the US, is bound to witness more scrutiny. Most Indian companies have already invested in quality-related issues and those which have got warning letters/import alerts/Form 483 letters have undertaken remedial measures," says Siddhant Khandekar of ICICIdirect.com.

Bohra of Nirmal Bang Equities agrees. "Indian companies are gradually moving up the learning curve. The recent USFDA issues will only help them being more disciplined in their manufacturing processes. Most companies have started investing in upgrading their facilities and are trying to be cGMP (current good manufacturing practices) compliant by hiring independent consultants/experts," he says.