The second quarter results for 2010-11 indicate that the Indian markets have bounced back, with most companies exceeding analysts' expectations.

By 4 November, 1,702 companies had declared their results for the July-September quarter. On an average, these companies have seen profits rise by 40.8 per cent. The topline remained robust, with sales growing by 19.6 per cent, against the 0.5 per cent fall recorded in the same quarter last year.

Margins expand: A pleasant surprise was the considerable expansion in profit margins. Net profits, as a percentage of sales, rose from 12 per cent in the second quarter last year to 14 per cent this year. This increase was due to greater operating efficiency.

Higher sales also helped firms achieve economies of scale, improving operating margins. Operating profits, as a percentage of sales, also rose from 19 per cent in the second quarter last year to 20 per cent this year. The improvement galvanised the Sensex, which was struggling to breach the 18,000 mark. 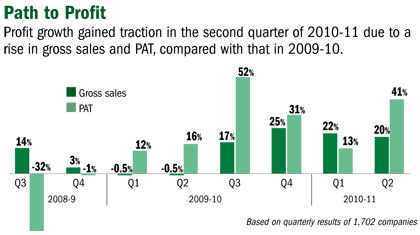 "These results by corporate India have surprised in the way companies across sectors have handled cost pressures to preserve their margins," says Sandip Sabharwal, CEO, portfolio management services, Prabhudas Lilladher. Corporate results in the first quarter had remained subdued due to weak margins.

Even though the top-line rose by 21.8 per cent, profit growth remained poor. At 12.7 per cent, profit growth in the first quarter was only a tad higher than that in the previous year (12.2 per cent). Net profit margin, as a percentage of sales, was 11 per cent, 100 bps lower than in 2009-10. This raised concerns about the ability to sustain profitable growth, resulting in a muted stock market performance.

The Sensex was unable to close above the 18,000 mark and registered a meagre gain of 173 points or 0.98 per cent. The sentiment changed in the second quarter. Even as raw materials and service costs remained at 37 per cent of total sales, interest costs came down by two percentage points.

This, along with robust sales, improved net profit margins. In this period, stock markets registered a gain of 13.4 per cent or 2,368 points and crossed 20,000 for the first time since 2008. Companies in automobiles, banking, IT, pharmaceuticals and capital goods sectors delivered better-than-expected results.

Improving IT sector: IT bigwigs Infosys and TCS kicked off the earnings season by reporting better-than-expected earnings. Beating analysts' expectations, these companies have seen their net profits rise by over 14 per cent each.

Apart from robust second quarter results, analysts have been surprised by the increase in revenue projection. Infosys' revenue in dollar terms is expected to rise by 24-25 per cent in the current financial year. Both companies have also increased their hiring target aggressively.

"We believe Infosys' quarterly results provide a strong indication of a shift in growth trajectory from 20-25 per cent to 30 per cent and indicate a stabilising supply side scenario, with attrition rates returning to normal," says Ashish Chopra, research analyst, Motilal Oswal.

Even though the rising rupee is a concern, market analysts are not overly worried about future earnings as the improving business environment is expected to result in more business.

The biggest surprise in the automobile pack came from Tata Motors. The consolidated net revenues grew by 36.5 per cent to Rs 28,782 crore. Profits have seen a jump from Rs 22 crore in the second quarter last year to Rs 2,223 crore this year on higher sales of commercial vehicles and JLR brands. In India, the company's commercial vehicles sales increased by 23.4 per cent y-o-y to 1,10,630 units. "Favourable macro-economic conditions, good monsoons and availability of finance led to robust domestic demand during the quarter," the company said in a statement.

A robust outlook and positive cues from management have led to earnings upgrades of Mahindra & Mahindra, Ashok Leyland, Bajaj Auto, and TVS Motors. Analysts at Anand Rathi, Motilal Oswal and Emkay have increased their EPS estimates for the current financial year by 4-7 per cent.

Even though the sales outlook for the industry remained robust, sustenance of margins in the coming quarters is becoming a concern. The largest selling two-wheeler maker Hero Honda is already witnessing a pressure on margins. It's EBITDA margins contracted by 4.98 per cent in the second quarter.

Boost in pharma revenues: The Improving demand for generic drugs in markets, such as the US and Japan, has helped Indian pharmaceutical companies report one of the best quarterly results in recent times. As many as 18 pharma companies had reported their second quarter results by the first week of November.

On an average, their sales and profits have gone up by 19 per cent and 34 per cent, respectively. In the first quarter, the same set of companies had seen their sales rise by 12.7 per cent. Sales of Aurobindo Pharma, Glenmark Pharma and Lupin rose by 22-27 per cent in the second quarter.

In fact, Lupin and Sun Pharma have seen a substantial rise in earnings estimates by analysts. Driven by generic sales, Lupin reported a 26 per cent jump in sales. Operating profit margins rose by 4.46 per cent to 19.2 per cent. Improved operating margins propelled the profit, which has risen by 33.6 per cent.

Sun Pharma saw its domestic formulations business rise by 36 per cent in the first quarter. While revenue rose by 15 per cent, acquisition of Taro Pharma meant Sun's earnings estimates was upgraded.

Cement disappoints: As expected, excess capacity dampened the margins of the cement manufacturers. ACC, AV Birla Group, Ambuja Cements and JP Associates continued to witness strong volumes. In October 2010, dispatches of these companies, on an average, rose by over 26 per cent.

However, competition from new regional players is resulting in low cement prices and realisations. So, even though dispatches were increasing, revenue and profits shrank. According to Motilal Oswal, second quarter results witnessed severe pressure on profitability, with an average decline of Rs 540 per tonne (q-o-q).

Ambuja Cements' net profit saw a fall of 44 per cent. ACC's sales and profits fell by 14.3 per cent and 79 per cent, respectively. Due to the amalgamation of Samruddhi Cement with UltraTech Cements, the latter's results are not comparable with previous quarters.

However, Mumbai-based broking firm, First Global, points out that the company's realisations and sales have fallen in the second quarter. "Its net realisation declined by 14 per cent to Rs 3,533 per tonne in this quarter. UltraTech dispatches 30 per cent of its production in the southern region, where the decline in realisation was sharper in comparison to the other regions," says First Global.

With monsoons behind them, cement makers are expecting the demand to stabilise. Among banks, ICICI, Axis, Bank of Baroda and Punjab National Bank delivered betterthan-expected earnings.

All firms have seen a substantial improvement in interest income and credit growth. Bank of Baroda has seen its profit grow by 61 per cent in the second quarter. Profits of Axis Bank and HDFC Bank have risen by 38 per cent and 32 per cent, respectively.

Despite a majority of the banks doing robust business in the second quarter, the results were overshadowed by weak results of the State Bank of India. Even though the net interest income grew by 45 per cent, higher provisions for bad loans led to flat profits. Second quarter net profits grew by a mere 0.5 per cent to Rs 2,501 crore.

Overall, benign second quarter results have led to more earnings upgrades than downgrades. Going ahead, the emphasis is going to be more on margin expansion than topline growth. With the economic projections remaining robust (over 8 per cent GDP), analysts do not expect the demand to weaken in the near future.

IT and pharmaceutical companies are likely to benefit from the improving global business environment. On the domestic front, companies involved in engineering, construction and critical technologies are expected to fare well.