Three ratios that can help you identify good stocks

The key ratios you can use to analyse a company are return on equity (RoE), return on assets (RoA) and return on capital employed (RoCE).

Finding a quality stock from the thousands that trade on exchanges may not be as difficult as it looks, provided you focus on right indicators. The key ratios you can use to analyse a company are return on equity (RoE), return on assets (RoA) and return on capital employed (RoCE).

If the three are rising at the same time, you can be pretty sure that the money invested in the company is being used efficiently, leading to higher profits.

But one must be cautious. These may not be the only indicators of the company's prospects. Growth of the industry the company operates in and investment in productive capacities also merit close scrutiny. "A simultaneous improvement in RoA , RoE and RoCE indicates the company is using shareholder funds efficiently. This ensures good returns," says Kiran Kumar Kavikondala, director and chief executive officer, WealthRays Securities.

"Rise in RoA, RoE and RoCE shows the company is growing. It shows clearly that the management is able to generate earnings from investments," says Satish Modh, director, Vivekanand Education Society's Institute of Management Studies & Research.

HOW THEY ARE MEASURED

RoE, or net profit divided by equity capital, shows profit earned in comparison with shareholder money. The higher the ratio, the more efficient the company is in using shareholder capital.

RoA, or net profit by total assets, shows how efficient the management is at using assets to generate earnings.

RoCE measures returns that a business is earning from capital employed. Capital employed equals equity plus non-current liabilities (or total assets minus current liabilities), in other words all long-term funds used by the company. It indicates efficiency/profitability of a company's capital investments. It should be higher than the rate at which the company borrows. If it is not the case, increase in borrowing will reduce shareholder earnings.

"A simultaneous rise in RoA, RoCE and RoE signals 'buy' if valuations are not discounting this already," says DK Aggarwal, chairman and managing director, SMC Investments and Advisors. 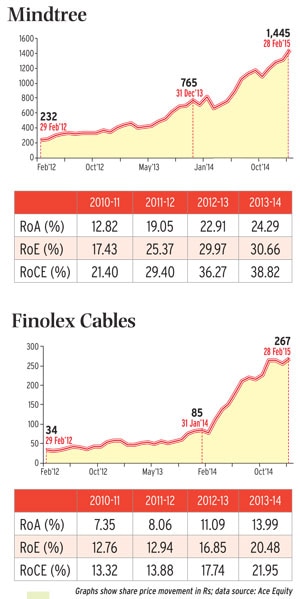 RoA indicates capital intensity, which will depend on the industry. Capital-intensive industries such as railway and power have low RoA as they have to own valuable assets.

Modh of Vivekanand Institute says, "RoA gives an idea about how efficiently the management is using assets to generate profits. But it is of less interest to shareholders than some other financial ratios such as RoE."

But RoA has an advantage too. It tells investors if the company has too much debt, which RoE does not capture. At the same time, RoE tells how profitable a company is for its owner(s) and how profitably it is using equity capital.

RoCE does not account for depreciation and amortisation of capital. Because capital employed is the denominator, a company with higher depreciated assets may report a higher RoCE without an increase in profit. Also, RoCE is low for companies that are capital intensive. For companies with insignificant debt, RoE and RoCE are the same. RoCE has little impact on stock prices by the time it is known. Aggarwal says, "The government has big plans for building smart cities. This will mean additional demand for cables. The company has been increasing its RoE and RoCE for years and is conservatively valued than peers. On January 28, it was trading at Rs 255 a share, a P/E of 18.82 on the basis of trailing 12 months earnings. We expect the stock to trade at Rs 349 in two years assuming P/E of 16 and 2016-17 earnings per share of Rs 21.79." It was at Rs 252 on February 6.

Britannia Industries: The company is a big player in the Indian foods market with leadership position in the bakery category. Its shares rose 111.65% to Rs 1,876 in one year to February 6; they were at Rs 886 on 6 February 2014. On February 6, the stock was trading at a P/E ratio of 39.28 as against the industry average of 33.90, indicating overvaluation. 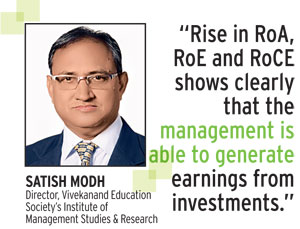 The stock has almost doubled in the last one year from Rs 452.15 on 6 February 2014 to Rs 897.50 on February 6 this year. According to a January 29 report by Nomura, Emami leads in most of the categories in which it is present and will continue to enjoy higher gross margins than the industry. The stock can touch Rs 1,010, it said.

Mindtree: The company, formerly known as Mindtree Consulting Ltd, is a global information technology consulting and implementation company. It operates in product engineering and IT services. 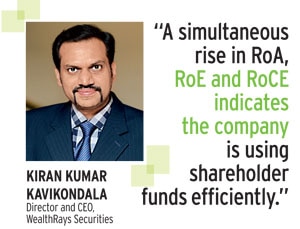 The stock rose 90.5% to Rs 1,355 in one year to February 6. "Revenue growth will accelerate this year with improvement in operating margins. The stock can touch Rs 1,530 in the next few quarters," says Prabhudas Lilladher.