Is it the right time to bet on sugar sector stocks?

The biggest problem for the sugar industry is the strict state control on every aspect of the business, right from the purchase price of sugarcane to how much each mill can sell in the open market. But analysts say that moves to decontrol the industry will improve the performances of sugar companies.

Rahul Oberoi / Money Today
This sugar year has started on a bad note for investors. Stocks of most sugar companies have fallen steeply since October 2012. The sugar year runs from October to September.

Market experts say lower production and realisation are eating into sugar companies' margins. In addition, the Uttar Pradesh government has increased the state-advised price, or SAP, of sugarcane by Rs 40 a quintal this year.

The SAP, which sugar mills have to pay farmers, is set by the states and is over and above the price fixed by the Centre. Uttar Pradesh is the largest producer of sugarcane in the country.

With a 16% rise in cane price, the costs will rise by a similar percentage and become more than the current sale price.

"With a 16 per cent rise in sugarcane price, the costs will rise by a similar percentage and become more than the current sale price. Stocks of most UP-based sugar companies have fallen substantially," says Sunil Jain, head, equity research, retail, Nirmal Bang Securities.

However, Kishor P Ostwal, chairman and managing director, CNI Research, is not negative on the sector. He says moves to decontrol the industry that are under way will improve the performance of sugar companies in 2013.

"The increase will bleed the industry and the companies will have to report substantial losses in financial year ending March 2013," says AK Prabhakar, senior vice president and head, equity research, AnandRathi Financial Services. For financial year ended March 2012, the top five sugar companies on the basis of market capitalisation reported a net profit of Rs 100 crore, down 72 per cent from Rs 358 crore in the year ended March 2011.

The biggest problem for the industry is the strict state control on every aspect of the business, right from the purchase price of sugarcane to how much each mill can sell in the open market.

Then there is a levy sugar obligation under which every mill sells 10 per cent production to the central government at a pre-determined price for sale through the public distribution system. At current market prices, this helps the government save Rs 3,000 crore, with the burden being borne by the sugar sector.

Stringent govt control over the entire chain of the sugar sector is the main obstacle to efficiency.

"Controls on pricing and trade have been the bane of the sector for quite some time now. It is high time decontrol of the levy system and the release quota is expedited, followed by substantial decontrol of international trade," says Shantanu Deb Mookerjea, executive director, LSI Financial Services, a boutique investment banking firm. Under the release quota system, the government decides how much each mill can offload in the open market.

To boost the industry, a committee, led by the Prime Minister's Economic Advisory Council Chairman, C Rangarajan, has suggested doing away with levy sugar and the release mechanism as well as the restrictions on export and import.

"Decontrol along these recommendations will be positive for the sector," says Prabhakar of AnandRathi Financial Services.

Industry players echo this. Mukesh Kumar, executive director, Vishwaraj Sugar Industries, says, "The sugar industry is expected to do better in sugar year 2013, with a little help from the government's acceptance of the Rangarajan Committee's report." 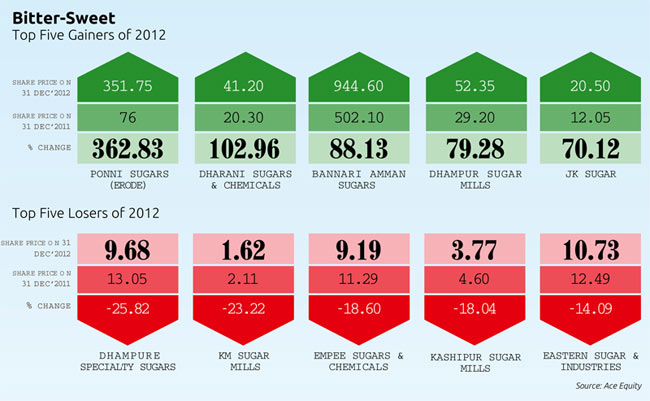 Mookerjea of LSI says the current regulatory environment makes sugar stocks unattractive. However, the government is expected to ease the restrictions over a period, triggering a rally in sugar stocks. Rohit Gadia, founder and chief executive officer, CapitalVia, an investment advisory firm, says, "Considering that most sugar stocks are looking technically weak, one should wait for the third-quarter numbers before taking any decision to invest."

The UP-based company is among the top three sugar companies in India with a capacity of 76,500 tonnes crushed per day. Jain of Nirmal Bang Securities says, "Apart from a large crushing capacity, BCML has large distillery and cogeneration operations of 320 kilo litre per day and 126 Mw (saleable), respectively. This makes it less vulnerable to falling sugar prices."

It also has one of the strongest balance sheets in the sector with a debt-toequity ratio of 0.53. BCML is expected to crush 7 per cent more cane this season compared to the previous one.

The stock is trading at a reasonable price-to-book value of 1.0. "We prefer Balrampur Chini on account of huge capacity, strong management, low debt and attractive valuation." In 2012, the stock rose over 45 per cent to Rs 49.50. Kohli of India Nivesh Securities expects it to rise more than 30 per cent in around two years.

The company is one of the largest sugar makers in India and a market leader (over 60 per cent market share) in its engineering business comprising high-speed gears and gearboxes up to 70 Mw capacity. It is also a big player in water treatment solutions.

TEIL holds 21.8 per cent in Triveni Turbine Ltd. The sugar division accounts for about 85 per cent revenue.

The water business has been seeing strong order inflows while the gear division's performance has been subdued. "The situation in both the businesses may improve this year. This, and focus on new products and geographies in the gears business, should improve both turnover and profitability," says Jain of Nirmal Bang Securities.

The long-term debt was Rs 860 crore on 30 September 2012 with a debt-to-equity ratio of 1.02. The stock is trading at a low price-to-book value of 0.5. "The valuation looks attractive considering TEIL's profitable water and gear businesses, the holding in Triveni Turbine and its core sugar business," says Jain.

"Shree Renuka Sugars can be bought at the current price. The country's largest sugar refiner and ethanol maker will be biggest beneficiary of any increase in the reserve price of ethanol. The company's Brazilian subsidiaries were facing several issues but we expect them to start contributing positively to the company. We expect the stock to rise 30-35 per cent in the next 12 to 18 months," says Daljeet Kohli, head of research, IndiaNivesh Securities. "The stock is trading at an attractive price to book value. It can touch Rs 45 by the end of 2013," says Ostwal of CNI Research.

"Shree Renuka Sugars has remained above the support of Rs 25 for the last couple of weeks and is looking bullish. It is also above its 200-day moving average. The relative strength index, or RSI, is 66.98. On daily charts, it has already given the trend-line breakout, and the next resistance is at Rs 34.60. One can buy above Rs 35 for a target of Rs 49 and Rs 62. The stoploss for this recommendation is Rs 28," says Rohit Gadia of CapitalVia.

RSI is a momentum indicator. Any reading above 70 suggests that the stock is overbought while a reading below 30 signals it is oversold.

A part of the Murugappa group, one of South India's largest business houses, EID Parry holds 63 per cent in Coromandel International, a leading fertiliser maker.

"The company hopes to start operating the 2,000-tonne-a-day sugar refinery in Kakinada in the first half of 2014. The longer crushing season in south India results in higher production of molasses and bagasse, the raw materials for distillery and cogeneration divisions, respectively. Plus, there is less political interference in the industry there compared to UP and Maharashtra," says Prabhakar of Anand Rathi Financial Services.

For quarter ended September 2012, EID Parry posted a net profit of Rs 325.8 crore, up 558 per cent from Rs 49 crore in the corresponding quarter a year ago.

"The profit after tax has risen sharply, mainly due to other income, but the top line too has grown 21 per cent due to increase in realisations," says Prabhakar.