Wockhardt among top gainers with returns of over 170 per cent

Wockhardt is among the top gainers in the past six months with return of over 170 per cent. Click here to Enlarge
Wockhardt is among the top gainers in the past six months with return of over 170 per cent.

TTK Prestige posted net profit of Rs 30.68 crore, up 21 per cent, in the quarter ended June 2012 against Rs 25.34 crore in the corresponding quarter a year ago.

Index Moves
Triggered by slowdown in demand of metals, the BSE Metal index plunged over 15 per cent to 10,521 in the past one year period till 10 August 2012. However, on the hope of further rate cuts, the BSE Realty index gained around 7 per cent since 10 May 2012. 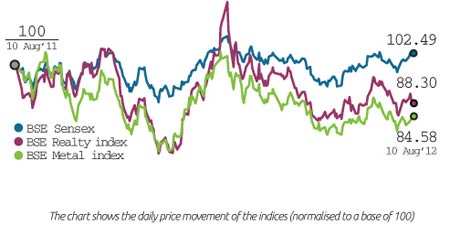 In Numbers
730 per cent is the annualised return given by the TTK Prestige stock in the past three years.

Factory Output
Index of industrial production fell 1.8% in June, due to slowdown in manufacturing sector.

Output of capital goods and nondurable goods dipped sharply. Overall, for the first quarter as a whole, IIP contracted by 0.1% till June 2012.