The Rise of the Drones

Draconian rules had kept drones grounded in India. But new, liberalised regulations have untethered the industry and opened up a new market — enterprises.

During the pandemic, over 160 pilot drones were deployed by the Drone Federation of India across 10 states between March and August 2020. -- Photograph by Jaison G
Nidhi Singal

What’s common to the Lal Dora villages in Haryana, the steel city of Jamshedpur in Jharkhand, and India’s Silicon Valley, Bengaluru? It’s drones; thousands of drones.

These three places and thousands of other villages, towns and cities will soon see drones dotting the skies. In the future, they may deliver shopping packages or medicines. But for now, they are being used to map and survey land. Why drones? Well, for one, they are much faster than conducting manual surveys and can also easily access hazardous, difficult-to-reach places. Then, their literal bird’seye view, powered by high-resolution cameras, captures accurate topographical data for mapping or for planning infrastructure development in the case of cities.

It’s no surprise, then, that the Indian government chose drones to help achieve its ambition of creating a comprehensive e-property ledger under the Svamitva (Survey of Villages and Mapping with Improvised Technology in Village Areas) scheme launched in April 2020. The government plans to use thousands of drones to map roughly 660,000 villages between 2020 and 2024. That has given India’s drone industry a massive boost.

“It is estimated that 3,000-4,000 drones will be used over the next four years [for Svamitva],” says Smit Shah, Director of Partnerships at the Drone Federation of India (DFI), an industry-led body to promote the use of unmanned aerial vehicles (UAVs). More importantly, he adds, “It is the largest commercial opportunity a drone company has ever got in India.” 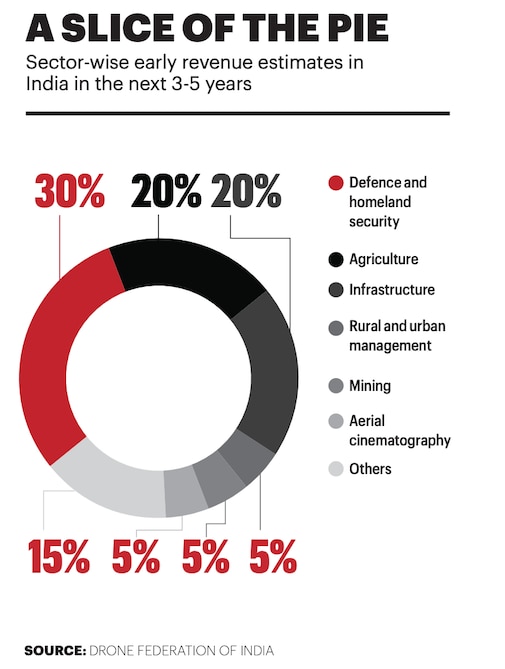 It’s also an opportunity to correct a lopsided market. Until recently, homeland security accounted for nearly 70 per cent of the Indian market, according to industry sources. The rest was allowed for civil use only after exceptions by the Directorate General of Civil Aviation (DGCA), India’s civil aviation regulator. Outside of the defence sector, drones are mostly used in agriculture for crop dusting and monitoring crop health, and in the energy sector to oversee hazardous operations or monitor oil pipelines.

That’s slowly changing, with other sectors also aiming to harness the power of drones. For example, a recent pilot showed drones could be used for last-mile delivery of medical supplies. “The ease of operations, cost-effectiveness, optimum utilisation of manpower, and rapidly developing technology are increasing UAVs’ application in almost all sectors,” says Abhishek Verma, Partner and Lead, Aerospace and Defence, KPMG India.

But these advantages weren’t unknown. What gave the sector wings is the government releasing a set of liberal regulations in August that made it simpler to own and operate drones. Barely a month later, the government approved a three-year production-linked incentive (PLI) scheme worth Rs 120 crore, which is double the combined turnover of all domestic drone manufacturers, in FY21. “With the roll-out of the Drone Rules 2021 and now a huge boost to drone manufacturing through #PLIforDrones, the journey towards becoming a global drone hub by 2030 has begun,” tweeted Jyotiraditya M. Scindia, Union Minister for Civil Aviation. The government hopes the PLI scheme will attract investments worth over Rs 5,000 crore in three years.

The forecast was promising even before these announcements. Research firm Research and Markets estimates that India’s UAV market will be worth $1.81 billion (Rs 13,575 crore) by FY26. The DFI has a more bullish estimate: Rs 50,000 crore in the next five years. “While agriculture, real estate, homeland security and defence will be the few areas that will be the biggest drivers for the industry, strategic defence procurements are not part of this estimate. That said, if the potential of drone delivery and drone taxis is unlocked quickly, the market will expand 10X,” says Shah.

But before we imagine drone taxis, or examine even the nearer-term applications of UAVs, we have to consider the challenges. For one, they are not cheap. A high-end drone could cost more than Rs 20 lakh, and that is before paying for an operator or a team to analyse the data. Then, like any tech gadget, drones can be hacked. And although strong encryption technology mitigates that risk, it would hike prices. However, there is the allure of handsome cost savings as well — as much as 3X in some cases, according to one estimate. And that could be enough to convince some firms.

Using drones in India was a pipe dream until as recently as 2014 when the government imposed a blanket ban on civilian drones. It removed the ban in 2018, only to replace it with extremely restrictive rules. Besides securing approvals from numerous law enforcement agencies, one had to fill up some 25 different forms and pay up to 72 various fees. That’s changed with the revised Drone Rules 2021, which nearly eliminates all the hoop-jumping, and the setting up of the DigitalSky Platform as the one-stop-shop for all things UAV. This, experts say, is likely to untether the sector and send it soaring.

In fact, drones, like other technology, witnessed an uptick in adoption during the pandemic. Soon after the country was locked down in late-March 2020, the Mumbai Police and DFI used surveillance drones to prevent mass gatherings and loudspeaker-mounted ones to conduct awareness drives in slum areas. In all, the DFI deployed 162 pilot drones across 10 states between March and August 2020.

But the real coming-out party will be the widespread adoption of drones by enterprises. The new rules and PLI scheme are likely to lead to an uptake of drones for agriculture, mining, infrastructure, emergency response, transportation, and geo-spatial mapping, among other use cases. Businesses have realised that drones have multiple commercial uses that go beyond basic mapping and surveillance.

After the defence sector, the biggest use case for drones is expected to be in agriculture. Since they are terrain-agnostic, it is faster and easier to use drones to monitor crop health or spray insecticide in vast farmlands. For example, during the locust swarms in Rajasthan last year, General Aeronautics’ drones took 15 minutes on average to spray insecticide over 2.5 acres, while a ground vehicle would have taken about 3 hours. “The agriculture domain is fast picking up as well. With agritech startups willing to integrate drone data, a lot of new use cases — such as irrigation planning and crop height estimation — are in the making, apart from the pesticide spraying and crop health monitoring activities,” says Akshath Shetty, Co-founder and CTO of Yaralava Technologies. The Bengaluru-based start-up focusses on the defence sector but is working on DROOYH, an aggregator platform for drone services in various sectors.

One such sector is real estate and infrastructure. “Since time is of the essence in completing infrastructure projects, UAVs are increasingly being used in the industry. The time-consuming processes and equipment used in the past for surveys are being replaced by drones. The technology is finding increased applications not only in capturing topographical features but also in-depth capturing of features,” says Sandeep Gulati, South Asia CEO and India MD at Egis. 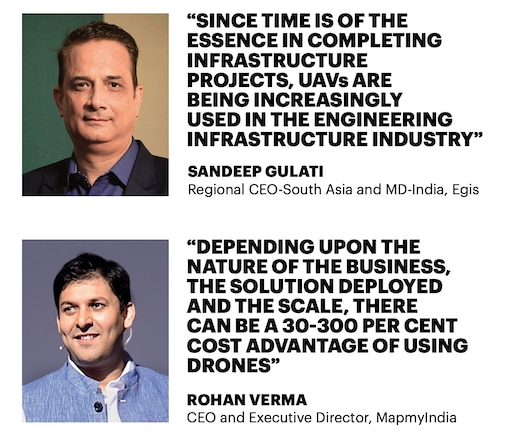 Drones help in preparing the base plans for cities and infrastructural facilities, says Gulati. Besides, he adds, they also help monitor the progress of projects, analyse data on traffic management, and evaluate the condition of structures like bridges and dams after a natural disaster.

The mining industry is another area where drones are already being used. In July 2019, Vedanta Limited became the first in South-East Asia to use drones in underground mining, says Anand Laxshmivarahan, Group Chief Digital Officer, Vedanta. The company also uses drones to monitor safety risks at its smelting units and to detect leakages in its oil and gas pipelines in Rajasthan. This not only made operations safer but also reduced Vedanta’s unplanned downtime and production loss through timely maintenance recommendations. “Drones remain somewhat of a niche technology for businesses and with the right accompanying technology and applications, drones can deliver strategic and competitive advantages as well as efficiency gains,” says Laxshmivarahan.

Even airlines are exploring the use of drones. SpiceXpress, the air cargo division of SpiceJet, has partnered with drone maker Throttle Aerospace Systems (TAS). “Currently, they are planning to use drones for last-mile deliveries for logistics and cargo,” says Nagendran Kandasamy, Founder and CEO, TAS. He adds that SpiceXpress has bought three high-end delivery drones to test its proof-of-concept, after which it could buy another 100-plus drones.

In fact, the market for using drones to deliver packages got a fillip in August when the long-awaited Beyond Visual Line of Sight (BVLOS) trials were completed in the outskirts of Bengaluru. BVLOS refers to operating drones at distances beyond the pilot’s normal visible range. The trials used two types of drones to deliver a payload of up to 2 kg of medical supplies at aerial distances of 2-7 km. The drones covered an average of 3.5 km in 5-7 minutes and delivered their payload either by tethered lowering or after landing. This successful pilot — led by TAS and business-to-business e-commerce platform Udaan, under the DGCA’s supervision — means e-tailers could soon use drones for last-mile delivery.

But perhaps these firms will not actually own the drones. The drone industry is broadly divided into manufacturers, operators, and software and analysis companies. In India, enterprises mostly opt for drones as a service to help with tasks like mapping or surveillance and for data analysis. That has created a market for companies such as Skylark Drones, which offers a full stack of services from operating the drone to analysing the captured data. “The end enterprise is not really buying a drone or a service but investing in insights from the information captured from the drone,” explains Mrinal Pai, Co-founder of Skylark.

The advent of drones as a service also helps enterprises in managing expenses. The price of an enterpriselevel drone starts at as low as Rs 1.5 lakh but could easily cost upwards of Rs 20 lakh for fully-loaded, top-of-the-line drones. After that, it could cost upwards of Rs 10,000 per quarter to process and analyse the data, according to market estimates. That’s why most companies opt for drones as a service. But even that’s not cheap. Renting a drone could cost between Rs 8,000 and Rs 15,000 per day, depending upon the nature of the job and the area covered, according to market estimates.

But the return on investment is huge. “Depending upon the nature of the business, the solution deployed in terms of the drone and its application, as well as the scale it is being used at, there can be a 30-300 per cent cost advantage of using drones,” says Rohan Verma, CEO and Executive Director of digital map-maker MapmyIndia.

Then there are the risks. One major concern, as with any technology, is hacking or GPS spoofing, which means feeding the drone false coordinates. However, that is nigh impossible given the use of encryption and other security technology, believes DFI’s Shah. “Hacking a drone is unlikely as communication links are encrypted,” he says. Moreover, from an enterprise’s point of view, opting for drones as a service also protects them in case of any incident as the liability lies with the drone operator. That aside, the industry’s development will also hinge on the effective deployment, upkeep and adoption of the DigitalSky Platform.

That said, the stars seem to be aligning for the industry, much as chipmaker Intel’s 1,825 drones aligned to create spectacular light shows at the opening and closing ceremonies of the Tokyo Olympics earlier this year. At one point, the drones arranged to form a blue-coloured Earth.

As more and more companies adopt the technology, drones could soon cover the Earth itself.