Is It Time For Drone Taxis?

"Drone taxis can be a solution to both road congestion and the heavy need for infrastructure."
Ankit Mehta | Print Edition: January 13, 2019 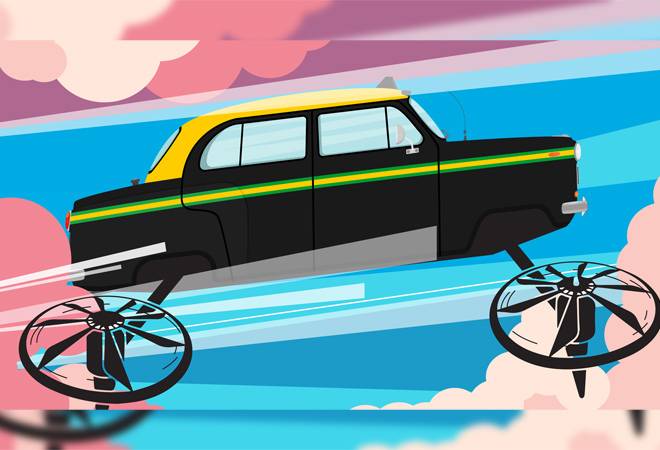 From the Vimanas of ancient Hindu scriptures to flying personal cars of the Jetsons, the idea of a flying vehicle has permeated our consciousness for millennia. In the modern era, with our population shooting up and addition of new public infrastructure to support it being slow paced, all of us have at some point become victims of increasingly dense traffic. India's current population is 1.35 billion, nearly a fifth of the world. In a recently conducted study by Boston Consulting Group, commuters in Mumbai, Delhi, Bengaluru and Kolkata spend almost 1.5 hours or more during peak traffic hours on daily travel, much more compared to other Asian cities. That's more than three months of added work time per year! It is estimated that around 15,000 kilometers of new expressways need to be constructed in India within the next 10-12 years, but the question is, will that be enough?

A drone taxi presents a unique solution to both road congestion and the attendant heavy need for infrastructure. Distances as-the-crow-flies are shortest, reducing the commute time significantly. Further, making people less reliant on road or ground-based infrastructure will also encourage the expansion of suburban or rural centres, helping spread the population over a greater area, and reducing urban congestion. Given that the direction of most of the recent developments in this sphere is to go electric, even the carbon footprint of such a commute can be low.

The idea is not as far-fetched as we think. Organisations are already racing towards becoming the first to successfully operate drone taxis, with the technology slowly stepping out of the domain of early prototypes and proof-of-concept stages. Dubai is dedicated to offering the first flying taxi service in the world. Officials in Nevada (US) are not too behind and are already seeking permission from the Federal Aviation Administration for the same. Many other countries like China are internally testing flying cars, and Uber aims to bring flying taxis by 2020.

India is also exploring the potential of autonomous passenger drones. Maharashtra may become the first state in India to get flying taxis under the Uber Elevate programme. The state government has already approved the Centre's plans for a drone taxi service in Mumbai.

Regardless of the technical progress, there exist a myriad of challenges that must be tackled. Regulatory agencies are going to have to address major challenges such as airspace allocation, Beyond Visual Line of Sight (BVLOS) flights, and, of course, standards involving advanced aerodynamics vessels (A2Vs) carrying human passengers. Such challenges are likely to make certification agencies and authorities uncomfortable, with significant changes required to traditional aerial infrastructure which has always assumed an on-board pilot.

While reliance on traditional infrastructure will lessen, we will have to envision and design the new infrastructure to support this radical shift in transportation. Just as the failure in uptake of electric vehicles has been attributed to a lack of charging infrastructure in India, the dream of drone taxis may stay within the confines of our imaginations if active steps are not taken to create the necessary backbone for take-offs, landings, refuelling or charging, autonomous traffic management and access.

Though there are operational challenges, there still remains the most obvious question of safety and reliability of the technology. Without adequate safety considerations across the entire chain, from design and development to maintenance, licensing and certifications, such technology will not become operational in a risk-averse country like India.

A lot of the challenges seem monumental, but they are not unsolvable. India is already on track to operationalising Digital Sky, an automated permission portal for drone flights with enforcement built in, which has the potential to serve as a model for the entire world. While time will only demonstrate the success of Digital Sky, it has at least proven that India has begun to realise that using technology to solve challenges, rather than over-regulating, can benefit all. While the concept of a drone taxi still resides in all of our imaginations, public consciousness towards environment, overpopulation and capital eating infrastructure may bring drone taxis to reality quicker than we believe it can happen. Soon, even airways may not be immune to "Meter se chalna!"

The writer is CEO and Co-founder, ideaForge

From 'What' To 'How' Of Consumption