The Three 'I's Of Farming

Income, innovation and integration are key to new-age agriculture as opposed to input-intensive monocropping, along with complementary and supplementary enterprises.
Tomio Shichiri | Print Edition: January 13, 2019 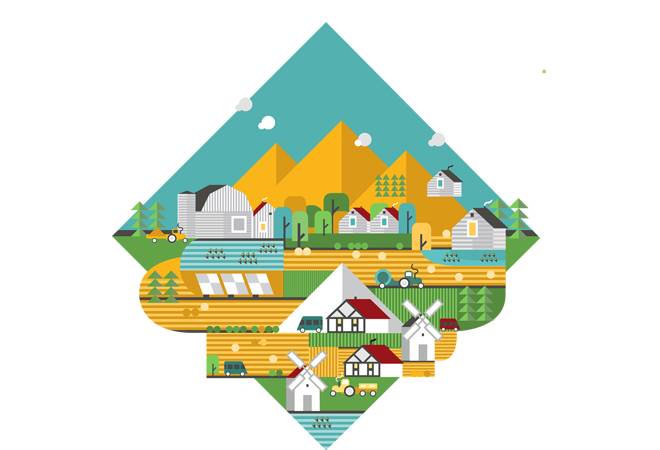 Agriculture is the primary source of livelihood for the majority of Indians, accounts for 46 per cent of total land use and contributes around 17 per cent of the country's GDP. An overwhelming majority of the Indian farmers, say 80 per cent, are small and marginal farmers, with less than one hectare of farmland per family. And the fragmentation of landholding continues. Moreover, these resource-poor farmers are particularly vulnerable to the ecological and economic impact of climate change.

Small and marginal farm holders mostly suffer due to unsustainable agricultural practices, which reduce ecosystem services such as nutrient cycling and pollination across rural India. Also, input intensification has resulted in the loss of agricultural biodiversity, further worsened by the lack of production and dietary diversity, and the practice of overgrazing. More specifically, agriculture contributes to the degradation of approximately 120.40 million hectares or 36.6 per cent of India's land base. Consequently, about 71 per cent of India's cultivated fields (or 100 million hectares of croplands) are moving towards conditions that would no longer support farming. The agriculture sector also puts enormous stress on the country's limited water resources, especially groundwater aquifers. Although technological advances offer many solutions, these are often not feasible for capital-starved small farmers and marginal cultivators who find these unaffordable and unworkable. Luckily, there are other solutions, which can be adopted without adding to the capital burden of small farmers.

The focus on input intensification is obvious as food security is often strongly linked to increased food production. But it is important to recognise that increased food production does not necessarily translate into improved food and nutritional security. For instance, India is a net exporter of food grains but ranks 103 out of 119 qualifying countries on the 2018 Global Hunger Index. With a score of 31.1, the country suffers from a level of hunger that is serious and accounts for the largest absolute number of undernourished people globally - 195.9 million during 2015-17, up from 190.7 million during 2014-16. Moreover, to increase food production, the focus has been on monocropping of a few staples, which, in turn, has led to lower production and consumption of indigenous and traditional crops/grains, fruits and other vegetables, impacting food and nutrition security in the process.

How SFLF and IFS Work

It is crucial for the country to rethink its agricultural paradigm and design one that suits small and marginal holders. One such disruptive approach could be the 'small farmers, large field' (SFLF) model, which was initially conceptualised in Vietnam and has spread rapidly from eight hectares to 1,96,000 hectares between 2011 and 2015. It appears to be an attractive model for small farmers who can significantly increase their income by harmonising and synchronising selected operations to achieve scale and gain bargaining power in input purchase and output sales. It can also strengthen backward and forward integration along the supply chain. Thus, it has the potential to minimise the scale disadvantages faced by small and marginal farmers through collective action. However, the model, through the promotion of monoculture crop choices and associated farm operations, could result in input intensification and the loss of agrobiodiversity.

Another disruptive model is the integrated farming systems (IFS), offering potential solutions to nutritional and livelihood security. Its adoption could enhance the sustainability of agricultural production systems as a whole while strengthening the resilience of small and marginal holders. More specifically, the IFS involves several sub-systems, including crops, orchards, livestock, fisheries, and their synergistic interactions. The model is characterised by the strategy of diversification, as opposed to specialisation in input-intensive monocultures. It helps spread risks and provides stability to farm livelihoods and incomes. It also offers several advantages, including efficient use of resources, higher productivity, reduced dependence on external inputs and increased economic output. For instance, nitrogen input to soils and pastures from livestock manure can help minimise the dependence on synthetic nitrogen fertilisers, and efficiently manage and recycle nitrogen losses and environmental pollution.

The model promotes sustainable systems such as recycling of farm waste for productive purposes, community-led local systems for water conservation and agroecological practices. In fact, alongside growing crops, a judicious mix of other income-generating activities such as dairy, poultry, fishery, goat rearing, vermicomposting and beekeeping will enhance livelihood resilience and ensure steady incomes. Increasing biodiversity will further contribute to a wide range of production, socio-economic, nutrition and environmental benefits. By planning and managing diversity in the farming system, agroecological approaches enhance the provisioning of ecosystem services, including pollination and soil health, on which agricultural production depends.

Models based on IFS and focussed on crop-livestock-aquaculture have been tested across Indian villages. For instance, Annamalai University demonstrated an integrated rice-fish-poultry farming system on 430 farmholdings in 12 villages of Cuddalore, Viluppuram, Nagapattinam and Tiruvannamalai districts of Tamil Nadu. The results indicated an annual increase in net returns per household by `33,000-50,500 per hectare for two and three crops, respectively. Besides, poultry manure from poultry dropping was 11.4-19.6 tonnes per hectare and pest suppression ranged from 17-27 per cent.

An integrated rice-fish-vegetable farming model, utilising the residual moisture and nutrients from fish activities, was promoted by Assam Agricultural University across 160 hectares. The system used trenches, dug on the sides of the rice fields (followed by vegetable cultivation) to accommodate the fish species. And the net economic benefit per household per annum was `29,000. While rice production rose from 2.97 tonnes per hectare (baseline value) to 4.6 tonnes, the beneficiary farmers got an average of 41 kg of fish and 1.7 tonnes of vegetable from rice fields measuring 2,800 sq. m. Other IFS models include the integration of makhana (fox nuts) with fish and singhara (water chestnut) at the Indian Council of Agricultural Research (ICAR) Complex, Patna; integrated pig/poultry-fish-vegetable farming in Assam, and an integration of red gram and Bengal gram crop with vermicomposting, azolla cultivation and poultry in Bidar, the pulse bowl of Karnataka.

IFS involves meaningful combinations of complementary and supplementary enterprises leading to optimal and sustainable use of natural resources, effective utilisation of available byproducts and profitable employment to farming households throughout the year. These, in turn, lead to higher combined farm income generation coupled with a high degree of stability and prosperity. It can be a powerful tool to double farmers' incomes and improve their lives. Furthermore, interventions in the IFS mode have resulted in increased percolation, reduced evaporation due to subsurface storage, low risk of breaching/damage during heavy rains, controlled run-off movements and lower costs compared to check dams. Then again, it presents a simpler technology, which is easily understood by farmers. Therefore, the IFS-led 'disruption' can set the course towards a more sustainable agroecological farming and improved ecosystem services, which are essential for immediate and long-term agricultural success.

The writer is FAO representative in India