Macau - The gambling capital of the world

Macau took a chance on an industry with a distinctly shady history but has come away with a big win. In fact, it is now the gambling capital of the world.

St. Paul's church in Macau dates back to the 1580s. Sadly, a fire destroyed much of the structure in the 19th century.
Pierre Mario Fitter
Let's be honest. There is no compelling reason to visit Macau unless you love to roll dice. It's like any other city in the modern Far East. You'll find tall buildings and neat streets. Someone even thoughtfully laid out beautifully-patterned cobblestone pavements all over the shopping district to add a bit of charm to the rampant consumerism.

Macau generates very little news - there are only two English newspapers - and it likes to keep things that way. It may well be the most boring place on the planet. Except it isn't. You see 2.17 million tourists visited the city last year and the numbers continue to rise. These weren't transits. That's nearly half of what India got in tourist numbers in the same year. And it is especially astoundnig when you consider India's population is 2,400 times bigger than the population of Macau.

Senado Square's cobblestone streets charm shoppers
So why do they come? Well, the Macanese government has decided to profit from one of the seven deadly sins. There are lots and lots and lots... and lots of casinos. Thirty three of them, and counting, in a city that's 1/20th the size of Mumbai and a mecca for gamblers.

Now gambling isn't the only attraction. Macau's other great tourist magnet is Duty Free. The whole city, not just its airport, is a shopping paradise thanks to its 'free port' status. And it has all been laid out rather well. Senado Square, the centre of the shopping district, is also the heart of any tourist's itinerary. UNESCO has classified the entire area as a World Heritage Site called the historic centre of Macau. In fact, for a tiny city, Macau has nearly as many UNESCO heritage sites as India. Around the square, you will not only find scores of shops but also Portuguese-style buildings that are all part of the UNESCO site. These include the Leal Senado or Loyal Senate building and several others that are as charming. The dizzying Macau Tower
A short walk up the hill from Senado Square lie the ruins of St Paul's church dating back to the 1580s. This was carved and built under the direction of Jesuit missionaries by Japanese Christians who fled persecution in their own country. Sadly, a fire wiped out much of the church in 1835. The view from the top of the hill is absolutely spectacular. This alone is worth the walk. 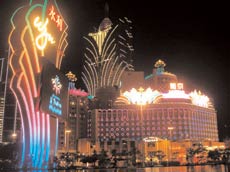 Macau is the Casino capital of the world, with 33 of them in a space 1/20th the size of Mumbai
Just across the road from the ruins is another must see site the Fortaleza do Monte. As its name suggests, this fort on the mountain, was the old military hub of the Portuguese colonisers. These days it protects Macau's history and culture, having been converted into a museum in the year 1998.

A few minutes' drive away from the summit is Macau's oldest religious structure. Legend has it that the A Ma temple was built to honour Mazu, the local goddess of sailors and fishermen and is revered by locals. The legend originates from the real life story of a local Chinese woman who stood on the shore in bright red robes to guide boats heading home from a fishing or mercantile voyage.

Not far from here is the city's tallest structure, the 338-metre-high Macau Tower. Built by the nonagenarian Macanese billionaire Stanley Ho, the tower serves as a communications hub, an entertainment arcade, a shopping mall and a bungee platform all rolled into one. While the Macau Tower isn't even among the world's top 20 tallest structures, the jump platform is the world's second highest. A trip to the top-and then off it-is definitely not for the faint of heart.

Stanley Ho's other big contribution to Macau is the gambling industry. For 40 years he held a monopoly license to the business. This was so lucrative that in 1998 his casinos contributed to 44.5 per cent of the government's tax revenues. As our guide joked, he is the unofficial 'father of Macau.'. I say 'joked' because the sobriquet is also a pun on Ho's sizeable progeny ("17 that he'll admit to", our guide adds with a disconcertingly knowing wink).

In 2002, Ho's monopoly was broken. Vegas billionaires Steve Wynn and Sheldon Adelson secured one license each, with four others being awarded to other business houses. The city's fortunes changed overnight. In just ten years gambling revenues have jumped from $2 billion to $33 billion. This is five times more than Las Vegas. Revenues are expected to double in just five years thanks to several new casino resorts that are about to open. All this puts so much money in the city's coffers that the government gives each citizen a $450 cheque every year. No one complains about the gambling.

It helps that most visitors--Indians included--don't need a visa to get into Macau. Passports are stamped on arrival for free. Hotels operate their own ferry services to and from Hong Kong. There's one every 15 minutes and the journey takes about an hour. In fact, if you book right, you can even catch a ferry straight from Hong Kong airport to the ferry terminals in Macau.

The Chinese government also plans on opening a bridge from Hong Kong to Macau by 2016, to facilitate travellers. This 50-km path should cut down travel time quite substantially. Such high connectivity makes the journey convenient for anyone with a day to kill in the region. It also makes things especially convenient for Indians since there are no direct flights to Macau yet. This city may not have the glitz of Hong Kong or its business houses, but for cultural diversity and the promise of fabulous gambling fortunes, there is nothing like it. Anywhere.