Serviced with a smile

Serviced apartment is no longer a foreign concept catering to expats and business travellers. Rivalling, and often, trouncing hotels in convenience, flexibility and budgeting, the new hospitality havens sprouting across Indian cities can offer more than you bargained for.

Gireesh Swaroop, an MNC executive, is always on the move. His work requires him to travel incessantly, and he is never in one city for more than six months. His wife accompanies him everywhere, and till recently, was happy with the nomadic existence, parked as they were in five-star hotels. But things changed once they had a baby. Suddenly, even five-star hotels were not convenient enough. “A confined room makes the babies crabby. So I decided to switch to serviced apartments, no matter which city I was in,” says the 38-year-old, who currently stays in a two-bedroom serviced flat in Chennai. 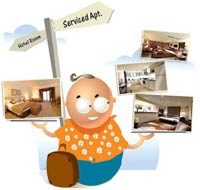 Click here to Enlarge
Till recently, expats or business travellers staying for between a month and a year in a city, were the stereotypes associated with serviced apartments. But things are changing rapidly. Now, backpackers on a weekend trip are as likely to check into these “apartment hotels” as a stag party on a shoe-string budget. Take Rishi Choudhury. Every year, from 20 December to 2 January, the 20-year-old is in Goa. “In peak season, even a budget hotel charges semideluxe prices, and they add a mandatory charge for an unwanted gala dinner,” says Choudhury. So he found a serviced flat between Panjim and the hottest beaches. “It’s cheaper and I can cook what I want, and save more.”

For the uninitiated, a serviced apartment is a fully furnished flat that gives the feel of a home while offering most of the amenities and luxuries that hotels promise—and are at least 20% cheaper. To begin with, you get more space, equivalent to a hotel suite, for less than the tariff of a double room. As for miscellaneous expenses, like phone and Internet charges or concierge services that can send your hotel bill skyrocketing, they are up to 40% cheaper in serviced apartments. While apartments are cheaper than hotels of an equivalent category even for short stays, you stand to maximise your savings with longer stays.

Better yet, you don’t have to contend with poor service, like housekeeping on alternate days or weekly laundry. Serviced apartments have scaled up to match hotels both in terms of service and quality. So you can expect everything from daily housekeeping to ISD phones and Wi-Fi connectivity even at budget apartments. If you shell out more for a four-star or luxury serviced apartment, the sky is the limit.

Think in-house gym and pool, round-the-clock check-in and check-out facility, travel desk, restaurant, if you don’t fancy cooking—or a cook for an additional charge—butler, and more. Little wonder then that the trend is finding more takers, be it in Mumbai or Manali, Kashmir or Kolkata. Krishna Menon, marketing head of Goa’s newest serviced apartments, La Mansion, claims that all their 16 flats are usually sold out. “Right now, we have managers from Volvo and Eicher staying with us on a holiday with their families,” he says, adding, “Which other threestar hotel will offer rates as low as Rs 900 per head per night?”

Till 2007, most such projects were started by big hoteliers, such as the Taj Hotels and the Marriott Group. Last year, leading global players in the serviced apartments space like Ascott and Oakwood leaped into the fray and raised the benchmark. Because of the sudden interest, the serviced apartment segment, pegged at Rs 1,500 crore, is growing at 15-20% a year, while hotels are posting a 6% growth.

Things are likely to become more interesting in the near future, with real estate giants like DLF, Ansals and Vatika taking on serviced apartment projects. While many of these upcoming projects are in the National Capital Region, courtesy the upcoming Commonwealth Games, the trend is spilling over to Tier II cities like Ahmedabad, Pune and Chandigarh. So Parsvnath Developers is in the process of executing its first serviced apartment complex in Bhiwadi, Rajasthan, and TDI reportedly plans it in Tier III cities in Haryana. The customer is surely going to be spoilt for choice.