Tips to driving safe and preventing accidents on the road

Defensive driving ensures that everyone on the road has a safe journey. Here is a list of a few simple, yet essential, defensive driving tips to ensure a stress-free trip.

Defensive driving, on contrary to the seemingly obvious conclusion, can save you just as much time as money and, more importantly, keep the roads safer for everyone. It will help you navigate in most road and traffic conditions and anticipate the possibility of a mishap.

City driving is also a major source of stress, especially during rush hour. Growing cities and suburbs have resulted in an increase in the number of people who have to use a car to get around. Following these steps will also make driving a more enjoyable experience.

Defensive driving is more about common sense than anything else. It is easy to remember most of what is written here, but then, 'the roads are full of idiots'. So, the more people driving defensively, the safer it will be out there.

RESPECT THE RIGHT OF WAY OF EVERYONE

If you spot a vehicle in a hurry, do not be obstinate and yield the right of way even if you are legally right in refusing. While the other driver might be being a bully in claiming you give way, it's better to let him through. Do not block the path of the vehicle by moving in front of it or impede its passage in any way. Doing so is dangerous and increases the risk of an accident.

Also, weaving in and out of traffic is a serious safety threat. Always remember, when it comes to driving, it's reaching your destination safely that is most important.

DO NOT EXCEED THE SPEED LIMIT 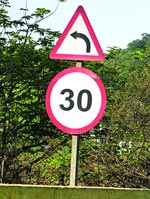 Driving over a given speed limit is not only illegal, but also dangerous. Driving at 60kmph on a road where the limit is 50kmph might save you 20 minutes, but it also increases the chances of an accident.

The faster you are moving, the longer it takes for the car to do your bidding when you apply the brakes. It also reduces the time you have to react to the unexpected, such as a car out of control or an animal crossing the road. The sheer physics of a collision at high speeds should be enough deterrence. The greater transfer of energy resulting from the higher momentum can cause horrific injuries.

Also, you will be booked by the police if you are caught speeding, which will include a fine the first time (up to Rs 1,000) and a more permanent punishment for repeat offenders.

Therefore, choose a speed matching the rest of the traffic as closely as possible without exceeding the speed limit. If the rest of the traffic is moving at a pace faster than you like, keep to the lane on the left and stay out of the way of the faster vehicles. If you need to overtake a vehicle moving slower than you are, do so from the right. Make your intentions clear using the indicators before overtaking.

PAY ATTENTION TO THE ROAD

"I never saw him!" is the most common excuse used after an accident. But come on, it wasn't that the other vehicle (or person or electric pole) was invisible.

Numerous accidents happen because a driver does not pay attention to what is happening on the road. Any vehicle, immaterial of its size, can be the cause of an accident. Also remember that you cannot rely on your fellow drivers to follow the rules and keep you safe. So stay alert and ensure that you have plenty of room to manoeuvre your vehicle out of a potentially dangerous situation. It would help if you don't use your mobile phone or listen to music on full volume.

Try to anticipate what the other drivers might do in the situation, especially on open roads or when there is heavy traffic. It's always better to stay wary. Be careful when approaching traffic signals, breaks in dividers or service roads. Hasty motorists tend to join the main road without checking the flow of traffic. Also, on a busy road, such as a commercial centre, watch out for cars pulling out from parking. Look out for gaps in the lines of traffic for space to take evasive action. Slow down if you see the traffic in front of you bunching up. No point in adding to the melee. A little patience will help in clearing the jam. The seat belt is the most important safety device in your car. A seat belt might appear to be insignificant, but it can save your life. The force and sudden movement on collision can fatally injure a person (ribcage, lungs and heart against the dashboard or steering wheel) or even fling drivers out of the car if they're not strapped in.

Seat belts also help in cutting down movement while driving on bumpy roads. If you have a small child in the car, use a baby seat and fasten it using a seat belt.

DO NOT DRIVE IF YOU ARE STRESSED OR UNWELL

If you think you are distracted, stressed, fatigued or unwell and it will affect your judgement while driving, you should not get behind the steering wheel. Any of these can slow down your reaction time and driving in such a state is unwise.

Being overworked, stressed or tired increases the chances of you falling asleep at the wheels. If it's a long drive and you feel tired, pull over to the side of the road and sleep for a while.

It goes without saying that consumption of alcohol is a serious impediment to making the right choices and it is very dangerous to drive inebriated. If you are going to a party where you are likely to consume alcohol, make sure someone who does not drink is the designated driver or arrange for a taxi. Driving under the influence of alcohol is a punishable offence, including the possibility of cancellation of your licence or even jail time.

Also, it would be safer not to drive if you are unwell. A high fever or an injury can be disorienting, resulting in an error of judgement. 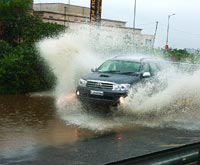 SLOW DOWN ON WET ROADS AND IN BAD WEATHER

The most sensible thing to do in adverse weather conditions such as heavy rainfall or fog is to slow down. Driving at high speeds in heavy rain could lead to your car aquaplaning (rise up on a thin film of water between the tires and road so that there is no more contact with the road).

Make sure that your car tyres have the right air pressure because overinflating tyres reduces the area of contact with the road, resulting in loss of rolling friction on wet surfaces. If your car tyres are overinflated, release some air.

Similarly, visibility is reduced significantly in a dense fog and judging the distances between vehicles becomes difficult.

In both cases-heavy rain and fog-slowing down is the safest option. If the fog is very thick, drive slowly along the divider or road markers to have a point of reference. Do not try to overtake in such conditions. 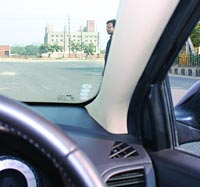 Remember that you have a few blind spots around your vehicle. The area behind the pillars of the car and at the back are the usual blind spots. Always be cautious when moving in these direction, such as when you are changing lanes or backing out of parking. Looking into your rear-view mirror is not enough. Watch out for approaching traffic from the sides, which a blind spot on the overhead mirror, in the outside mirrors.

On roads that have higher speed limits, such as highways, traffic from the rear approaches very quickly. When there are large vehicles such as trucks and buses on the road, ensure that you maintain enough distance for your car to be visible in the rear-view and outside mirrors of the vehicle in front of you. In fact, tailgating any vehicle is a risk. So maintain a reasonable distance between your car and the vehicle in front.

Backing up is always tricky. Have a quick look around for anything in your way first. Be especially careful if there are children playing around the vehicle. Defensive driving might seem dull, but safety should be the paramount consideration on the road.