Do you have a small budget for your next vacations? Here are some of our suggested destinations for unlimited fun.

Thrifty Trips
Do you have a small budget for your next vacations? Here are some of our suggested destinations for unlimited fun within Rs 50,000. Nestled in the southern slopes of the Satpura range is Pench National Park, which gets its name from the Pench River which flows through it. If you have read Rudyard Kipling's The Jungle Book, be prepared to come across familiar places like the Waingunga River, Kanhiwara village and the Seoni hills. A tiger that you spot in the jungle might be a descendant of Shere Khan. May-June is the best time to visit Pench. You can expect to see more animals when they come out to quench their thirst. The park remains open between October and June.

If you enjoy being close to nature, love adventure and photography, start training for a 10-day trek under the aweinspiring snow-tipped mountains. The trail, from Yuksam, around 125 km from Darjeeling, to Gocha La runs through moss-laden forests of oak, chestnut, pine, maple, magnolia and rhododendron culminating in the meadows of Dzongri with magnificent view of the mountains. On your way, follow rivers, walk through grassy pastures, make acquaintances in quaint villages and pay visits to Buddhist monasteries.

Balmy weather, pristine beaches and luxurious resorts-Cebu is a perfect destination if you are looking to holiday on a tropical island. The 225-km long island in Philippines, which boasts of rich history as well as modernity. Portuguese navigator Ferdinand Magellan, planted the Cross of Christianity in the name of Spain in 1521 on this island during the first voyage that circumnavigated the earth. Cebu's 166 islands and islets are fringed with sandy beaches and sapphire-clear waters with marine life, perfect for divers.

Lavish Retreats
If you have a holiday budget of Rs 1 lakh, fly to another continent; peep into the history, experience rich culture and bask in the beauty of nature.

Soak in true colours of Africa with magnificent and aweinspiring wildlife, picturesque forests and varied habitats, and make friends with the Masai tribals. When you go exploring the Masai Mara region's various national parks, you can sight several species, including African buffaloes, zebras, gazelles, antelopes, wildebeests, cheetahs, hippopotamus and baboons. The parks are a photographer's paradise and you capture some of Africa's unique natural beauty. Don't forget to visit the Masai Mara reserve, which is famous for the annual migration of around 1.5 million wildebeests. It is also a home to the magnificent Masai lions. Go to Lake Nakuru for watching flamingoes, rhinoceros, giraffes, waterbucks, leopards and pythons. Make sure you carry plenty of memory cards for your digital camera so that you don't miss some great opportunities to capture the African wilderness.

Around 80-km long, this freshwater lake has several towns located around it. If you like partying and the urban noise, set up your holiday base camp in Sifok. Keszthely, the oldest settlement of Lake Balaton, has the Festetics Mansion, the third largest chateau in Hungary. Another town Hvz is famous for its Thermal Bath, the world's second largest hotwater lake. The Badacsony Hill is an extinct casket-shaped volcano. Its slopes are covered with picturesque vineyards which produce an assortment of excellent wines. You can climb up the Badacsony Hill on a worn out trail peppered with small wine growers selling their wines. Be adventurous and taste as many different wines as you can.

Surrounded by rolling hills and the Vltava River, Cesk Krumlov is a unique Gothic-Renaissance town with narrow medieval lanes and a large castle over the river. This Unesco heritage town has around 300 medieval buildings. When you see people who call old medieval houses their home, buy their groceries in old shops and while away lazy afternoons in centuries-old cafes, you will be tempted to believe that you have been teleported to the past. This picturesque town is home to less than 14,000 residents. Cesk Krumlov hosts several festivals each year. If you go there in June, you can be part of the Five-Petalled Rose Festival, which is celebrated on the weekend of summer solstice. During this festival, the downtown area is decorated as a medieval town with residents and revellers dressed in costumes from that era.

Exotic Extravaganza
If money is not a constraint for you, there are some fascinating foreign lands to explore. Take a cruise to the South Pole or unravel the Mayan mysteries.

Do you enjoy the thought of standing alone in a vast expanse of ice with blue water glistening in sunlight? Maybe, you want to see reindeers grazing on arctic lichens and moss, walruses basking in the sun or polar bears hunting fish. Take a cruise holiday to the South Pole and experience the unique wilderness of the Arctic region. If the weather permits, you can go for a walk on the tundra island and watch rare local birds. You can also try kayaking and snow-shoe walking. En route, you will get the opportunity to watch both small and majestic glaciers floating in the icy water. Absorb the spectacular ice landscape surrounding you on your polar voyage, catching sight of polar bears, ross gull and other local fauna. Shoot them all with your camera till your fingers start aching and refuse to press the shutterrelease button.

In the nineteenth century, Khiva was infamous for slave caravans, barbaric cruelty and brutal journeys across deserts. Today, it's a clean and quiet 'city-museum', making it hard to imagine the bustle of traders and slaves in the dirty lanes of this town on the ancient Silk Route across Asia. In accordance with the medieval Oriental tradition, Khiva has an inner (Ichan-Kala) and outer city (Dishan-Kala). The ancient heart of the town is concentrated in the well-preserved Ichan-Kala surrounded by a strong fortress with gates in the four directions. Except for a handful of old mosques and shrines, most of the historic mosques, tombs, alleys and madrassas are museums. At night, Khiva becomes more mystical with minarets shining in moon light. Set your imagination free while wandering in the twisting alleys with silhouettes of ancient buildings. 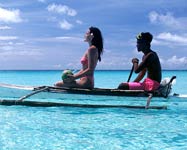 Sharing boundary with Guatemala and Mexico, Belize is a small county in Central America. With Carribean Sea on the East and dense jungles on the West, the country has something to offer to everyone. You can go snorkelling in translucent waters in coral reefs. Around 40% of the country is protected as parks, sanctuaries and bio-reserves, allowing vegetation and wildlife to flourish. Ruins of ancient Mayan civilisation strewn across Belize make the country unique. Xunantunich, which means stone woman in Mayan language, in the western border, is a Mayan archeological site. You can see several old ruins, including partially-excavated and largest pyramid, El Castillo. Climb ancient temples, view carvings of Gods and rulers and enjoy the panoramic view of the nature's bounty.

*The estimated costs include travel fare from Delhi and accommodation for seven days for a couple. The Antarctica trip is a 10-day cruise from Norway.