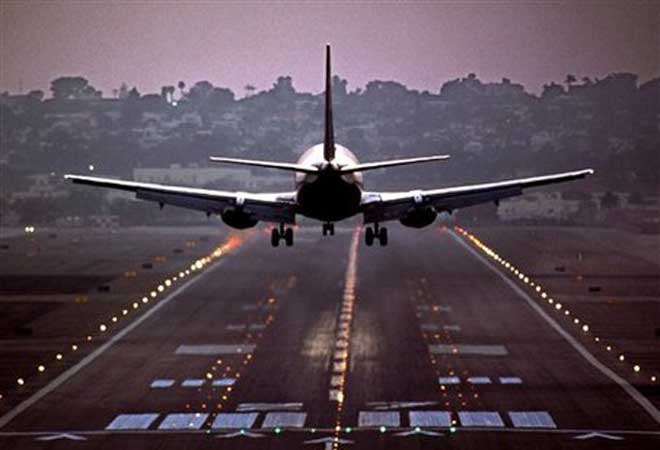 Hotel Shri Ram International is a single-star hotel in Varanasi, close to the renowned Kashi Vishwanath Temple, charging between Rs 800 and Rs 1,800 a room per night. Though started in 2005, it has no website and for years never bothered about online bookings. Six months ago, however, it listed on a number of online travel agency (OTA) sites. Bookings through this platform are still in single digits every month, but manager Sunil Singh is optimistic. "I hope we get 30-40 per cent of our bookings from them, considering they charge commissions of 20-25 per cent," he says.

The hotel is one among thousands whose bookings have been made available online for the first time in recent months in a concerted drive undertaken by the OTAs. Why are they making this effort? Because income from domestic air tickets - their main revenue source - has slumped. For instance, MakeMyTrip.com, with 50 per cent share of the online air ticketing market (and 13 per cent of total air bookings), suffered losses of Rs 78.6 crore in 2012/13 and Rs 60.5 crore in 2013/14 in its India operations. Most of its competitors have fared similarly.

This is primarily collateral damage following the travails of the domestic airline industry, with most carriers making losses. Margins on tickets have fallen from eight per cent in 2008 to around six per cent. "Air travel commissions have been volatile over the last two years and will further soften over the next two to three years," says Dhruv Shringi, CEO of OTA Yatra.com. With Kingfisher Airlines grounded in 2012 and SpiceJet in serious trouble for the past few months, canceling hundreds of flights, capacity is down as well. Kingfisher's fall alone wiped out 20 per cent of total domestic capacity, bringing it down to 270,000. Of these, SpiceJet has about 30,000 seats, though this loss - if the airline does indeed close - may be offset by the newly begun AirAsia India and Vistara expanding their operations.

Again, visiting OTA sites to compare fares has become less of an imperative when there are just four or five airlines operating. "Customers may as well go directly to the airline websites to buy tickets," says Sanjeev Aggarwal, Managing Director at venture capital firm Helion Advisors. (Helion made its first investment of $6 million in MakeMyTrip, in 2006.) Another reason for doing so is that many airlines now prefer to announce special deals on their own websites, rather than enter into exclusive tie-ups with OTAs as before. 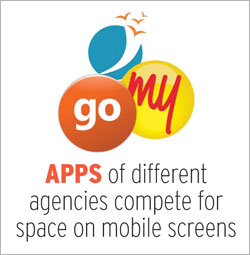 Raised airfares added to the OTAs woes. It means more earnings per ticket, but also fewer tickets sold. "With competition reduced, airfares shot up, so price-sensitive customers dropped out," says Rajesh Magow, CEO-India, MakeMyTrip. In 2013/14, according to the Directorate of Civil Aviation, domestic air traffic fell five per cent over the previous year to 60.37 million. But if competition has fallen among airlines, it has only grown among OTAs. When MakeMyTrip launched India operations in 2005, it was a pioneer. A decade later, it is competing with 30 others, big and small, including the South African giant Naspers-backed Goibibo.com and the US-based heavyweight Expedia.com. With little to differentiate the OTAs, the situation was ripe for a meltdown.

Realising this, OTAs have begun looking hard at new routes to profitability. They are putting much more emphasis than before on hotel bookings and holiday packages, international air travel, as well as travel by means other than air - rail, bus and cabs. Just 10 per cent of hotel bookings, even today, take place online - against 60 per cent of domestic air bookings - so the potential for growth is immense. At eight to 10 per cent, margins in hotel bookings are higher than in air ticketing. Transactions relating to these are also much more frequent. For some later entrants, which concentrate on this segment, around 80 per cent of daily transactions and 75 per cent of revenue come from services other than selling air tickets. "Sometimes, entering the market late is not a bad thing at all," says Ashish Kashyap, Group CEO, Ibibo Group. 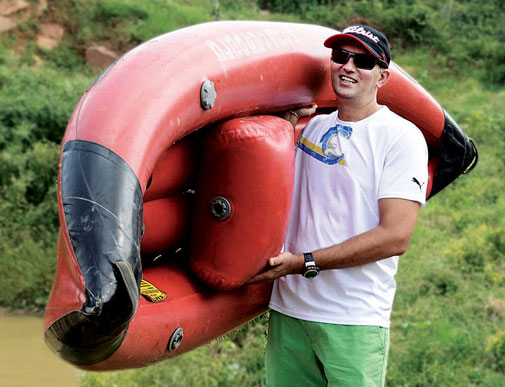 'Air travel commissions have been volatile over the last two years and will further soften over the next two to three years,' says DHRUV SHRINGI, CEO, Yatra.com. (Photo: Vivan Mehra)
Even for old timers such as MakeMyTrip, the new focus is yielding results. In the quarter ended June 2014, its net revenue from hotels and packages stood at $17.87 million, higher than the $16.48 million it got from air ticket commissions. After two consecutive years of losses, the company almost broke even in the first two quarters of 2014/15, due mainly to its increasing non-air business. (A rush of promotional offers from airlines also helped.) Cleartrip.com entered the non-air business only in 2009/10, yet it already provides 20 per cent of its revenues.

But there are hurdles. There are 40,000 hotels in the country, and many small ones, especially those outside big cities, do not even have a website. "We have a large team on the ground which manages relationships with almost 18,000 hotels, getting rates and inventories from them," says Shringi of Yatra. "It also involves content aggregation in terms of images, reviews, mapping the hotel's distance from various points of interest. Only if we provide all this will customers get the confidence to book online." Some smaller players are moving very fast, concentrating on the low-end hotels. iXigo.com, started in 2007 - in which MakeMyTrip has a minority stake - already has tie-ups with 11,000 such hotels and hopes to take the number to 50,000 soon. Stayzilla.com, begun around 2005, has roped in 19,000 places, both expensive and budget ones, including home stays, guest houses, bed-and-breakfast accommodations and serviced apartments. 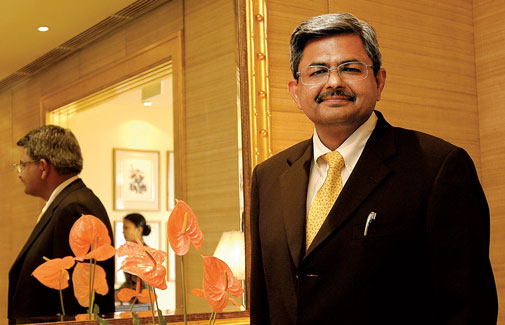 'Obituaries are going to be written faster now [as competition among OTAs intensifies],' says SANJEEV AGGARWAL, MD, Helion Advisors.
With holiday packages, some start-ups have been more innovative than the established OTAs. Noida-based TravelTriangle, for instance, is not a regular OTA, but prepares customised itineraries for travellers and invites travel agents, including OTAs, to bid for the package. It has 430 travel agents on its list and 30,000 unique itineraries. "Customising holiday packages and fulfilling them offline is a tough task in India," says Sankalp Agarwal, Co-founder and CEO of TravelTriangle.

At present, only 16 per cent of online air ticketing at MakeMyTrip is over mobile, while for hotel bookings the figure is 34 per cent. But OTAs know this can only increase. "Mobile is going to be huge," says Magow of MakeMyTrip. "It will be the game changer." Small and budget hotels will be crucial to drawing in more mobile users. "The next 100 million Internet users will do so through low-end mobile devices and will be people who would want to stay in zero or single-star hotels," says Aloke Bajpai, Co-founder and CEO, iXigo. He is looking to raise $25 million, mainly to build an offline sales team to liaise with such hotels. Yatra gets 20 per cent of its revenue from mobile transactions and expects this to rise to 35-40 per cent soon, while Cleartrip earns 30 per cent from mobiles and believes it will soon rise to 50 per cent. The problem, however, is that as mobiles become the preferred channel and consumers interact with OTAs largely through apps, competition will get tougher. The fight for 'screen space' on smartphones will be fierce, as few are likely to download more than one app - or two at best - for their travel needs. "Obituaries are going to be written faster," says Aggarwal of Helion.

International air tickets are also getting more attention. They are of much higher value and provide bigger commissions - an average ticket costs Rs 45,000 against Rs 12,000 for local travel. With around 400 global airlines operating in India, the need for OTA sites where fares, routes and timings can be compared is much greater than on the domestic circuit. The scope for growth is huge as only 20 per cent of such bookings happen online. "Growth here is already outstripping growth in the overall OTA market," says Kashyap of Goibibo. Cleartrip began international air bookings only in 2008, but earns 30 per cent of its revenue now from this segment. MakeMyTrip expects 28-30 per cent of revenue from international flight bookings in 2014/15.

Booking bus tickets and providing car rental services - which too most OTAs have got into - requires cutting-edge technology to manage large inventories. "You have to manage two sets of consumers," says Kashyap. "One is the customer and the other is the bus or car provider, who has to be tech-enabled to get on our platform," says Kashyap. Goibibo is part of the ibibo group which also owns redBus.in, the pioneering - and India's biggest - bus bookings site. "One of the keys to redBus's success was the development of technology platforms for bus operators," he adds. 'Mobile is going to be huge. It will be the game changer,' says Rajesh Magow, CEO-India, MakeMyTrip.com. (Photo: Vivan Mehra)
Redbus was actually built by entrepreneur Phanindra Sama but was acquired by the ibibo Group for around Rs 800 crore in June 2013. Bookings per month are now at two million. Around half of them are through mobiles, compared to five per cent when the deal was struck. Ibibo, in March 2014, also acquired bus tracking start-up Your Bus. MakeMyTrip is not far behind - it has acquired Easytobook.com, based out of Tel Aviv and Amsterdam, Luxury Tours and Travels in Singapore, ITC in Thailand, and Hotel Travel Group with business across Southeast Asia. Diversification and differentiation are easier through acquisitions. "The opportunity cost of building a business organically can be very high," says Aggarwal of Helion.

Despite turbulence in the sector, its growth is a given and investor interest remains undimmed. Even start-up TravelTriangle has raised Rs 10 crore from venture capital firm SAIF Partners. Helion Advisors got 10x returns on its investment in MakeMyTrip when it exited in 2010, following the latter's NASDAQ listing. IDG Ventures and Vertex Venture Holdings invested Rs 140 crore in Yatra in 2014. Reliance Capital, which invested Rs 40 crore in Yatra for a 16 per cent stake in 2006, is reportedly looking to exit with Rs 500 crore. Concur, a US-based travel and expense management solutions company, put $40 million in Cleartrip in 2011 and later raised its stake.

But to sustain the interest of investors, OTAs will have to keep finding new avenues for growth. Keeping this in mind, MakeMyTrip has started a $15 million innovation fund for travel start-ups. "The idea is to become part of a big innovation that we missed out," says Magow. "Maybe someone sitting in a garage is thinking of a disruptive business model."

Footnote: An earlier version of the story carried Ashish Kashyap's designation as Founder of Ibibo Group. He is the Group CEO of the company. The correction has been made.