With stock markets on an upswing in the past month, there are signs of the effect rubbing on to the primary market as well.

With stock markets on an upswing in the past month, there are signs of the effect rubbing on to the primary market as well. Some companies have been returning to the market to raise funds. Last month, textile company Alok Industries raised Rs 450 crore through a rights issue that was subscribed 118%.

Another company, Adani Power, has approached the Securities and Exchange Board of India (Sebi) with a revised IPO plan estimated to raise over Rs 2,000 crore. This is the second time the company is planning to come out with an IPO: its previous attempt was scuttled by adverse market conditions. Aditya Birla Nuvo, the conglomerate of the AV Birla group with businesses ranging from fertilisers to financial services, is considering plans to raise fresh equity of about Rs 1,500 crore, mainly to finance the group's life insurance business. 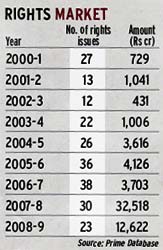 A clutch of PSU banks is also planning rights issues. In what could be the country's biggest rights issue, the State Bank of India has approached the government for permission to raise Rs 20,000 crore during the current financial year. The proposal to raise tier I capital was because SBI estimates a fund requirement of Rs 60,000-70,000 crore over the next five years.

According to Prime, there are at least 45 more companies that, in the past six months, have announced plans to tap the rights market. These include Bharat Forge (Rs 400 crore), Chettinad Cement (Rs 250 crore), Jaiprakash Associates (Rs 1,800 crore) and Tata Communications (Rs 1,000 crore).

The surge is partially due to measures like reducing the rights issue timeline from 109 to 43 days introduced by Sebi to make the process more attractive for companies. Sebi has also amended the listing norms to enhance disclosures on shareholding patterns. Unclaimed shares in IPOs will have to be credited to a demat suspense account maintained by the issuer till the rightful owner is allotted the shares. It has also decided to reduce the notice period for all corporate actions like dividends and bonuses from seven to two working days. To benefit retail investors, Sebi has asked firms to declare dividends on a per share basis, not percentage, which can mislead investors.
- By Rakesh Rai

Form change
The income tax return filing format will see another change in this season, according to the recent notifications by the Central Board of Direct Taxes. Effective from 1 April this year, all TDS payments will have to be made electronically. Earlier, only corporates and persons covered by mandatory tax audit were required to do so. Also, a new Form 24C has been introduced, which is to be submitted electronically every quarter for each TDS section. As for e-TDS statements, the formats of Forms 24Q/ 27Q have been modified. Besides, the formats of Form 16/16A have also been amended.

However, the most interesting change is that the entire system will now be based on a unique transaction number (UTN). The UTN will be a common link between a challan, TDS certificate and e-TDS statement, and will be provided by the Income Tax Department to simplify references. However, the department hasn't informed as to how the UTN number will be provided.
- By Narayan Krishnamurthy No takers, yet
A little over a month ago, the UTI Fixed Term Income Fund Series V—Plan X became the first fixed maturity plan (FMP) to be listed on the stock exchange. Sebi made the listing mandatory after the liquidity crunch in October 2008, when the corporates exited FMPs and fund managers sold the debt papers that the FMPs had invested in. “The sale pushed the prices down, which dipped the net asset values of FMPs,” says Dhirendra Kumar, CEO, Value Research, a Delhi-based mutual fund tracking outfit.

To check the distress sale of FMPs, Sebi has prohibited fund houses from redeeming investments in FMPs before maturity. Hence, the listing, which was to make trading in FMPs similar to that in exchangetraded funds (ETFs). While eight schemes (see table) have been listed, not a single trade has taken place since the listing day because there are no buyers. In order to exit an FMP, an investor needs to sell units on the stock exchange that it's listed. But with no liquidity on the stock exchange, investors are stuck. Lack of liquidity is not the only reason. For trading, you need to know the underlying asset base. But in FMPs, there is no formal method of disclosure of portfolio contents and indicative yields can no longer be given. Hence, the lack of trade.
— By Narayan Krishnamurthy

Prepaid goodies
While prepaid instruments like meal vouchers have been around for some time, they have been limited by their use at specified locations. Now, banks will issue prepaid tools like vouchers and wallets worth up to Rs 50,000, which can be used to purchase goods as well as withdraw cash from ATMs. Including smart cards, magnetic strip cards, Internet accounts, mobile accounts, mobile wallets and prepaid vouchers, these instruments will have a validity of six months. The value stored in these can be paid as cash, debited to a bank account or by credit card. They are classified as semi-closed (used at all merchant locations), closed (specific locations) and open. While the first two cannot be redeemed or used to withdraw cash, the open version can. 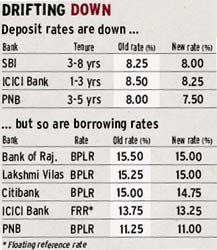 Cutting edge
One man's meat is another man's poison. Earlier this month, SBI lowered the rate on fixed deposits by 0.25%. The cut comes less than a month after a reduction in April. The bank's popular 1,000-day deposit will now earn only 8% a year. Six months ago, the same deposit was offering 10.5%. Other banks too have cut their deposit rates in the past two weeks (see table). If you were planning to invest in a fixed deposit, the fall will hurt. But the drop in interest rates has given borrowers a reason to smile. The banks have also reduced lending rates. The 50 basis point reduction in the floating reference rate of the ICICI Bank will be especially welcomed by its floating rate home loan customers: it will shave off about Rs 700 from the EMI of a Rs 20-lakh loan for 20 years. Of course, the bank will not reduce the EMI, but the tenure. That's still a relief for borrowers whose tenures had shot up from 20 years to almost 30 after a rise in rates in the past three years.
- By Babar Zaidi Real mobility
Telecom tariffs have gone down sharply in the past couple of years, but so has the quality of service. While companies seem to believe that subscribers choose operators based on tariffs alone, research by AC Nielsen suggests otherwise—it is network quality that is on top of mind among consumers. According to a survey conducted across 10 cities, 42% of subscribers rate network performance as very important in choosing the operator. With significant differences in service quality (see table), the solution may lie in mobile number portability. In six months, you will be able to change your existing service operator while retaining your mobile number. The Department of Telecommunications (DoT) has given the licence to MNP Interconnection Telecom Solutions to roll out the system in two phases. The catch, though a minor one, is that there may be a fee (Rs 200 or so) for number portability. It should be worth it, if you get better service.

Surer future
Insurance plans targeted at children attract parental interest by emphasising how they can secure the child's future—usually by offering life cover and returns. While life cover protects the child in case of the unfortunate death of the parent, returns are generated with a long-term investment strategy that takes care of the rising cost of higher education or the child's marriage.

In keeping with this modus operandi, Future Generali India Life has introduced a future child benefit plan designed to support a child's career dreams and ambitions. It does so by providing money at the critical ages of 21 and 23, linking premium outgoings to this factor. The plan also offers an in-built waiver of premium in the event of the death or accidental, total and permanent disability of the parent. This ensures the continuity of the plan, taking care of all future premiums so that the cash flow is intact.

A money-back policy, the plan starts making pay-outs to the policyholder three to five years before maturity, helping him or her use them to defray the education costs. “Due to the spiralling education costs and growing uncertainty in the economic sphere, the need for a planned education corpus has never been more pronounced. Hence, this product,” says Jayant Khosla, CEO, Future Generali India Life. Assuring the future, indeed.
- By Narayan Krishnamurthy

Sebi whip
After mutual funds and brokers, Sebi has brought promoters under its scanner. First, the regulator barred GHCL promoter Sanjay Dalmia, its managing director and company secretary from trading in the stock market. It also stopped 46 promoter investment companies after investigations revealed GHCL had filed false shareholding details. Then came the interim order barring Pyramid Saimira Theatres promoter Nirmal Kotecha and 229 other entities from trading, for alleged securities fraud. Sebi has also sought clarification from the Bharti group on whether it violated norms by increasing the promoter's stake in Bharti Airtel from 60.91% to 67.03% without an open offer (promoter group companies with over 55% stake must make a public offer if they acquire more than 5% in a single financial year). Bharti says the transactions were undertaken in two different financial years. Sebi hasn't ruled yet, but it's clear it won't brook violations gladly.

Fuel group falls, inflation declines
The contribution of fuel group to WPI inflation has fallen since September 2008. It entered negative territory in December 2008, leading to a drop in overall inflation.