In case of health insurance policies, much of the disgruntlement and many disputes have risen from lack of transparency.

An insurance policy is a legal document that binds the seller to deliver on the offerings stated in it. However, most buyers have found themselves at the wrong end of the stick because the product received by them has varied considerably from what is promised. In case of health insurance policies, much of the disgruntlement and many disputes have risen from lack of transparency in the claim settlement process or during the renewal of the policy.

Now, the Insurance Regulatory and Development Authority (Irda) is trying to rectify some of these wrongs. In a March 31 directive, it states: "A health insurance policy shall be ordinarily renewable except on grounds such as fraud, moral hazard or misinterpretation and upon renewal being sought by the insured, shall not be rejected on arbitrary grounds." This has given some teeth to the consumer, who was being taken for a ride.

The timing of this directive is important, considering that the regulator has been talking of such a move for some time and insurers have been taking it easy. Insurers make substantial changes in the policy document to the detriment of the consumer on renewal. They are also not clear about the premiums charged at various age slabs and are not transparent on the increase in premium on renewal.

"After seeing the recommendations of various committees and working groups, renewals shall not be denied on the ground that the insured had made a claim in the previous or earlier years," says J. Hari Narayan, chairman, Irda. The regulator has also asked insurers to disclose upfront the details about the terms and conditions. This directive will come into force for all policies issued or renewed after 1 June, though the definition of pre-existing disease and when it will be covered is yet to be finalised.

Insurance companies have been known to cite fine print while refusing claims related to pre-existing diseases or complications arising from such diseases. They say that the policy doesn't cover claims for pre-existing diseases, a fact that is almost never highlighted at the time of selling the policy. Several insurers have also been known to deny claims on the grounds that it was raised earlier or for adding a substantial load (additional premium on grounds of a claim) when the policy comes up for renewal.

Irda had tried to seek a consensus on the pre-existing disease issue through the General Insurance Council (of which every general insurance firm is a member) to arrive at a definition. If this had happened, it would have compelled the insurers to cover all such diseases in the fifth continuous year of a policy with the same company, if a claim had not been raised during those five years.
- Narayan Krishnamurthy

From now on, you need not shell out extra money to use any bank's ATM, thanks to a directive by the Reserve Bank. Banks have been asked by the regulator not to charge any fee for cash withdrawals using ATM and debit cards issued by other banks. While some like the Kotak Mahindra Bank and Union Bank of India (UBI) had made access to accounts by other bank ATMs free, others were charging Rs 10-20 for each cash withdrawal and between Rs 4 and Rs 7 for every balance enquiry. However, banks can still charge extra for services like cash withdrawal with the use of credit cards and at ATMs located outside India.

In some cases, though, customers trying to access other banks' ATMs have had to deal with printouts saying 'transaction declined'. This, say banks, is due to an overload of the national financial switch which enables inter-bank transactions. However, banks are yet to finalise new inter-bank transaction charges. "Right now, different rates are being charged, but eventually they will converge," says T.Y. Prabhu, executive director, UBI. In another move to ease cash withdrawal, the government has abolished the banking cash transaction tax with effect from 1 April this year.
- Rakesh Rai 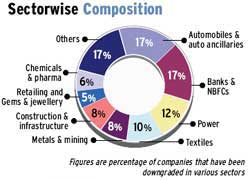 During 2008-9, 84 companies were downgraded by Crisil, compared with 14 last fiscal, and the number of upgrades went down from nine to two. What's changed? "A slowing economy and a sharp downturn in the investment environment have affected the credit quality," says Raman Uberoi, senior director, Crisil Ratings.

Take Tata Motors. Crisil downgraded the company's rating from AAto A in 2008-9. The company's debt-to-equity ratio is expected to be more than two times going forward due to the increasing debt required to fund its acquisition of Jaguar/Land Rover.

Of the total downgrades, 15 are from the automobile and auto ancillaries sector, 14 from the financial sector, eight from textiles and seven each from metals and mining, and real estate and construction. About 81% of the downgrades were driven by lack of access to adequate funding or by sharp decline in demand, or both.

The first impact of the global slowing demand was felt by exportoriented sectors such as textiles, information technology, and gems and jewellery. The textile industry was affected the most as many companies were highly leveraged to fund their expansion plans and defaulted on their debt obligations due to a severe strain on their working capital. This was followed by suppliers to the real estate industry, who faced a crunch due to the delayed payments from highly leveraged developers, who were stretched for liquidity. Uberoi expects this trend to continue for the next two quarters. After this, he feels that the severity of the downgrades may come down as companies realign businesses and production costs.

Though rating downgrades didn't mean much in a bull market, it is important to track the changes in the debt patterns of the companies you invest in. "A rating of BBB and above could be considered investment grade," says Uberoi. Anything below this would be speculative.
- Tanvi Varma

At a time when job losses are rampant, a Best Employer survey seems ironical, if not anachronistic. The annual Hewitt Associates Best Employer in India 2009 survey looks at the attributes that make employees stay with their employers.

While workplace location plays a role in deciding whom you work with, the survey has analysed, inter alia, the average employee engagement score, a measure of the extent to which workers are emotionally and intellectually involved with the employer. Considering the survey was spread over a year that included both smooth and difficult phases, it helps in assessing companies that have made the cut. The mantra this year is simple: talk to everyone and redeploy before you fire. The companies that made the cut are still investing in training and talking positively by not ruling out bonuses or raises.

In the past, results have shown that the best employers attract nearly five times more talent and have 35% higher employee retention rates. This makes the results a benchmark for job-seekers as well as employers keen to make their outfits employee-friendly.
- Narayan Krishnamurthy

The companies that have taken foreign exchange loans to buy or create an asset may post better results for 2009 fiscal than expected as they don't need to show forex losses on these loans. The National Advisory Committee on Accounting Standards (NACAS), a governmentappointed body that recommends revision of accounting standards, has postponed till 2011 the adoption of Accounting Standard 11, which requires liabilities and receivables in foreign currency to be figured in the balance sheet in Indian rupees.

"The suspension will also help the firms that had made significant mark-to-market provisions in the past three quarters to write back the losses they had booked," says Prabal Banerji, CFO, Hinduja Group. This could considerably alter the bottom line of several companies for fiscal 2009.

Accountants, however, are disappointed. "By suspending AS 11 for two years, they are allowing people to indulge in window-dressing,'' said a senior partner with a leading accountancy firm.
- Rakesh Rai

Even as credit card delinquencies are on the rise, the ICICI Bank, along with Singapore Airlines, has launched a new credit card. "The co-branded credit card offers multiple benefits to customers as all values are bundled together in the plastic," says Sachin Khandelwal, head, retail assets, ICICI Bank. However, this card is not for all, especially if you are used to the free cards that are available across issuers these days. Targeted at premium cardholders, with an annual income above Rs 7.2 lakh, it costs Rs 6,000 annually. Among a host of benefits that you can avail of is KrisFlyer, Singapore Airline's frequent flyer programme—for every Rs 100 spent, you get 3 KrisFlyer miles. The members can redeem these for free flights with over 20 international airlines to more than 820 destinations across 160 countries.
- Narayan Krishnamurthy

Standalone health insurance is a must in every individual's portfolio. To add to the existing products and competition, Bharti AXA general insurance has launched SmartHealth. A plain vanilla health cover, its has been packaged as an over-the-counter (OTC) product that can be sold to people who qualify by fulfilling certain basic requirements.

It covers hospitalisation, daycare treatment for minor accidents and surgeries, critical illness covers for cancer, kidney failure and heart attack, among others. It also offers additional cover for recovery and home nursing. Besides, the policy covers pre-existing diseases after four claim-free years.

The cover provides a 5% discount on claim-free renewal and offers covers ranging from Rs 50,000 to Rs 5 lakh, with a floater option, wherein dependent children should be less than 23 years old. The qualifying age is between 5 and 65 years, provided the individual meets certain criteria. Though the OTC route eliminates the tedium of health tests and other procedures without compromising the scope of the policy, it leaves several loose ends at the time settling claims as far as pre-existing diseases are concerned. Though a feature-packed cover, the distribution on the OTC front can pose difficulties at the time of making a claim.
- Narayan Krishnamurthy 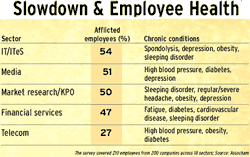 In a melting global economy, the health of corporate employees is deteriorating, with IT personnel reporting most chronic afflictions like depression and sleeping disorders.

"The overall cost of borrowing has come down and banks will pass on the benefits of the rate cut. However, banks also need to project for the uncertain future."
- K.V. Kamath, MD & CEO, ICICI Bank

"The lending rates have come down, but not as much as was warranted by the policy rates."
- D. Subbarao, RBI Governor

"Inflation rate will enter negative territory within two weeks and will remain there for at least threefour months."
- Dharmakirti Joshi, Principal Economist, Crisil

"We have targeted the fuel economy in excess of 30 km/litre and are on our way to achieving that."
- Rajiv Bajaj, MD, Bajaj Auto, on the company’s small car project