It is easy to prove that the Indian economy would do better if Indians had to pay less tax. 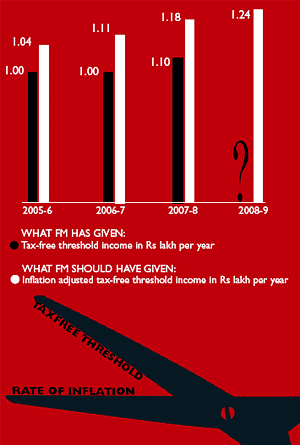 The government’s spending is wasteful and its savings rate is at best low, or often, negative. In contrast, individual citizens and the private corporate sector save a lot and invest and spend in ways that contribute to overall prosperity.

GDP growth rates have a direct link to the higher savings rates of households and private corporates. The less money the government has to fritter away, the better. The more money individuals can spend wisely, the better.

Despite the above logic, you cannot avoid paying income tax without risking severe penalties. And, since you have to pay income tax, it is a relief to know that the bad old days of 98% tax rates have disappeared.

By 1970s standards, IT rates are both moderate and stable. The government demands that you hand over only four months of earnings (instead of 358 days!) if you fall in the highest tax bracket. Personal IT rates have been largely unchanged since 1997.

Before you start thanking the FM for his kindness, consider the effect of inflation on your buying power. The cost of living has gone up substantially since 2004-5 and indexing incomes to account for inflation is considered a normal method of national accounting.

The government even recognises the impact of inflation on purchasing power by linking the dearness allowance (DA) for its employees to the Consumer Price Index for industrial workers (CPI-IW). If the CPI-IW rises, so does the DA.

In 2007-8, if inflation runs at about 6% between now and March 2008, you will need around Rs 1.18 lakh to match the purchasing power of Rs 1 lakh in 2004-5. By 2008-9, assuming that inflation continues to run at about 5%, the equivalent sum will have risen to about Rs 1.24 lakh. So, even with the higher IT threshold, you will actually be considerably less well-off than you were a couple of years ago! Unless of course, the FM exercises his discretionary powers and offers another threshold hike.

Since all income taxpayers are forced to work part-time for the government, surely the concept of inflation-indexation can be applied to the IT threshold of non-taxable income just as it is to DA? If it was applied automatically and the tax rate remained constant, you would pay about Rs 1,100 less than you actually would in IT this year and about Rs 800 less next year. In 2008-9, the difference would be around Rs 1,500. If that money was in your pocket instead of the government’s coffers, you would deploy it a lot more efficiently than the government does.

If the IT limit was linked to the CPI-IW, it would curtail the discretionary powers to arbitrarily raise (or lower) the IT limit. And it would give the government a real incentive to tackle inflation since its tax revenues would be adversely affected by every rapid upward spiral of prices.

Private citizens buy the cars, mobiles and houses and avail of the services that keep the economy buzzing and ensure that tax collections and GDP growth meet targets. And again, household (and private corporate savings) contribute most of the investment.

Of course, it’s not a one-way street for private citizens. By helping the economy grow, private citizens have also become better off. Since 2000-1, per capita GDP has risen by about 10% per annum in nominal terms. After adjusting for inflation, per capita income rose about 7.4% in 2005-6 and it should do slightly better in 2006-7.

The moral (if there’s one): spend and save with equal enthusiasm if you want India to prosper.

—BY DEVANGSHU DATTA and KAMYA JAISWAL

Like most good things, the best was left to the last. For all those biding their time, this might be the last chance to book the cruise to the Caribbeans for the cricket World Cup. When the tour packages were offered initially, the prices seemed exorbitant. As the D-day draws nears (the inauguration ceremony for the seven-week tournament is slated on 11 March), official tour operators are luring cricket travellers with heavy last-moment discounts. So check the fine print and haggle for the best deal. It’ll be sometime when you next get the chance of mixing sun and sand, cricket and calypso.

Lalu Prasad Yadav has striven to make the railways more passenger-friendly since he took charge of the portfolio in 2004. Continuing with the trend in the Railway Budget 2007-8, he has introduced more populist measures. The Railway Budget incorporates a reduction of 2-8% in rail fares, more seats per coaches and more coaches per train, comfortable coach designs, high-speed trains and better ticketing systems, among other benefits. The fare cuts, especially in the AC classes is clearly aimed at wooing back travellers who have migrated to low-budget airlines. Rail can provide a costvalue option to match air travel when it comes to short journeys. Though time and cost are two main criteria, convenience is also a major factor. Both transport modes have pros and cons. Here’s a list that could help you decide.

Would you pay for dinner at a classy restaurant with meal vouchers? UTI Bank hopes that many corporate employees will do precisely that with its newly launched Meal Card for corporate employees. This allows holders to spend their meal allowances on ready-to-eat items, food and beverages. UTI Bank hopes the card will replace the current system of third-party meal vouchers. Corporate meal allowances are exempt from fringe benefit tax if issued as vouchers. Currently companies waste resources distributing vouchers every quarter.

Vouchers are inconvenient to use. The meal card on the other hand is pre-paid and it can be recharged. The annual maintenance expenses are borne by the employer. Corporates pay a one time issuance fee, per reload fee or annual maintenance charge. The card works on MasterCard’s platform and it will be honoured at 40,000 establishments.The maximum transaction limit per day is Rs 3, 000. The next time you’re at the supermarket, you can swipe your meal allowance away.