Prepare for the worst

While the book raises fears about the future, it offers tips on prospering during bad times. 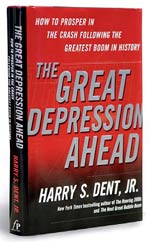 Remember the Great Depression? A majority of Gen X, Gen Y and their parents have only heard about the bank failures, soup kitchens and snaking job queues of the 1930s. But if Harry S. Dent, Jr. is to be believed, the world will see a similar scenario play out between mid- to late 2009 and 2012.

It's a scary claim, but one that is likely to be true because as an economic forecaster Dent has been proved right several times. He was virtually alone in predicting that the 1990s boom would continue unabated when everyone was screaming depression. He claimed Japan would enter a longterm decline in the late 1980s when the nation appeared invincible, and he warned the world about the ongoing economic slump in 1992.

In an unlikely abberation, Dent appears to have gone horribly wrong about his prediction for 2009. In his previous book, The Next Great Bubble Boom (2005), he had claimed that the Dow would hit 40,000 this year. As this is unlikely to happen, he has faced brickbats for this prediction.

However, Dent was not really barking up the wrong tree. Were it not for the unlikely spate of crises that unfolded in the US last year, Dent's prediction could have been on course. According to historical data, the US stock market and economy witness long-term peaks every 40 years. These occurred in 1929, 1968, and logically, should have peaked again in 2008. Instead, what unravelled last year was the subprime crisis, which took down giants like Lehman Brothers, burst the greatest credit bubble in history and slowed down the world economy.

What usually follows such developments is a massive downswing. This is perhaps why Dent claims that 2008 is just the beginning of a crisis that is hurtling towards its worst phase. Given his track record, it would be prudent to pay heed to his warning.

On the one hand, the long-term spending spree of the baby boomers will start to slow down by mid-2010. On the other hand, there is the oil bubble just waiting to burst. Oil and commodity prices have peaked every 30 years — in 1920, 1951 and 1980 — and the next was expected between late 2009 and mid-2010. But like the stock market and economy crashes, which came in earlier than expected, the same may have happened to crude and commodities in 2008. However, when the two trends collide, the global economy takes a sharp nosedive and we enter the Next Great Depression. This, says Dent, will continue into the early 2020s. The next broadbased global bull market won't begin till 2020 or latest by 2023. Though the economy might seem to recover in mid-2009, thanks to the strong stimulus and rescue plans across the world, it would be wiser to consider it a lull before the storm.

While the book stokes your worst fears, it also offers tips on how to prosper during the coming crash. Dent does this by etching a road map for the future of the world economy and suggesting specific strategies for investors and businesses alike. So he tells readers to watch out for a series of buying opportunities in mid- to late 2012, late 2014, 2019-20 and late 2022, for selective reinvestment in stocks and real estate. This pattern of stock rallies replicates what happened in the US between 1932 and 1937 and in Japan during 1992-96. That's the good thing about Dent. Like all economic forecasters, he bases his predictions on historical data. But unlike most others, he goes a step further by presenting a slew of graphs and tables, which helps readers reach the same conclusions on their own.

Another major takeaway from the book is that conventional investment wisdom will not apply in the years to come. For one, a diversified portfolio, which is considered a natural hedge against market shocks, won't suffice. Between 2008 and 2023, all traditional asset classes will deflate, causing most asset allocation models to fail. He predicts that the only safe havens, at least till mid-2012, will be cash equivalents, high-quality bonds and strong currencies. Even gold is expected to fall after mid-2010.

India too will feel the sting of initial setbacks, but the effect will be far more muted than in North America and Europe, thanks to our lower export exposure. He claims that India will be the world's largest economy by 2065-70. But the thought that is likely to stay with the Indian readers is one of Dent's last predictions — around late 2060s and 2070s, the next generation will be hit by the first serious depression in Asia.

Lost a job? Not to worry