The market is back to the January 2006 level. Value Research and Money Today look at how India’s most wanted stocks fared in this journey.

>Hanging by a threat
>Living on a shoestring
>The unthinking borrower
>7 investment truths
>Following in the market’s footsteps
>Mirror the index, not the fund
>My experiments with a job loss
>Time to adapt or perish
>Can you bank on funds?
>Time to get back to basics
>Small is risky, but can be profitable
>5 value stocks going cheap

Click here to Enlarge
Stocks are one of the best investments you can make— if you pick the right ones. How does one make the right choice? There is no one broad rule. In the past Money Today has demonstrated two ways to make the choice. By following the time-tested investing rules (The golden rules of stock investing) and the benefits of following in the footsteps of equity mutual funds (India’s most wanted stocks: 28 December 2006 and 27 December 2007), which buy and sell stocks for a living and, therefore, have their fingers on the pulse of the markets.

Sceptics will scorn at these approaches to investing at a time when the markets are going through one of the most savage bear phases. On 27 October, the NAVs of the entire universe of diversified equity funds touched a 52-week low. That was the day the Sensex touched a two-year low of 8,509. Though it has recovered a bit, the one-year performance of most stocks is still in the red. So, whether you chose stocks on the basis of the golden rules or simply resorted to copycat investing, you still ended up with losses. It’s enough to make even the most optimistic investor sit out of the markets.

In the past two years, we have looked at the portfolios of all equity mutual funds to find out which were the most widely held stocks. But this year, we have delved deeper to cull out the stocks that have been consistent favourites of fund managers. We tracked the fund managers’ picks over the 482 trading days that the Sensex took to reach an all-time high of 20,873 on 8 January 2008 from the 10,000 level it first reached on 31 January 2006.

To complete the journey, we also looked at the stocks that the funds picked during the 192 days of free-fall that brought the Sensex back to 10,000. To get meaningful fund-holding data, we analysed the free-fall period until 30 September 2008. Our conclusion: there can still be some reason to cheer if you buy stocks based on fund managers’ picks.

Most fund managers in India adopt a bottom-up approach in stock-picking. They focus on specific stocks and not on sectors or industries. However, different sectors play different roles in the rise—and fall—of the markets. Each year of the bull run since 2005 has been dictated by just one or two sectors— the rest have just been riding the wave.

The fortunes of a sector can change dramatically. The realty sector had ruled the roost in 2007 and metals had also outperformed. In this year’s fall, these two sectors have borne the brunt. Despite this, there are some favourite sectors in which most funds want to invest. Notwithstanding the turbulence in the financial world, banking is also indicates the narrowness in stock selection.

Click here to Enlarge
The top 10 large-cap stocks held by mutual funds over the past two years are more or less the same. These companies are the poster boys of the Indian growth story. They have created wealth for investors and promoters over the past several years. Undoubtedly, this is a galaxy of the biggest and most successful Indian companies. Impeccable corporate governance, solid management teams and sound growth strategy are all the usual ingredients of the stocks in this list. Little surprise then that this is where the bulk of mutual fund assets are invested. Whenever a new diversified equity fund is launched, these are the stocks the fund manager buys first, whatever the market level and whatever their price. Only after the fund portfolio has been cushioned by these bellwethers does the fund manager begin his hunt for the unusual stories and extraordinary gains.

We analysed the fund managers’ need—or greed—to pick some of these large-caps irrespective of the market levels, and tried figuring the reason they pick a Reliance Industries or a Bharti Airtel in any season. The results are there to see. Take Reliance Industries. On 31 January 2006, it was available for Rs 717, and on 8 October 2008, it closed at Rs 1,305. That’s an absolute gain of 82% for someone who bought the scrip when the Sensex was 10,000, saw it go up to 20,873 and come back to 10,000 levels. Bharti Airtel stock price appreciated 90% over the same period.

This is what is expected of a fund manager—picking stocks that will appreciate irrespective of where the market goes. The more consistently they manage this, the more compelling the reason to buy a stock, whatever the market level. Picking winners consistently is impossible for even the best of fund managers, which is where luck comes in. If you think this is an aberration, we looked at the performance across the 10 largecap stocks. The results were mixed, but the collective outcome reinforced our belief: of the 10 stocks, seven gained in value, while only three lost money. 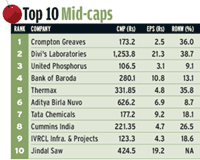 Click here to Enlarge
If large-caps are the low-risk investments that fund managers make, mid-caps are the stories that have the potential to become large-caps. What work for mid-caps, especially in a bull run, is the high returns they manage relative to their representation in a portfolio. When we examined the portfolios of some consistently good performing funds, we found that almost one-third of the consolidated corpus of some of the funds is invested in mid-caps. Interestingly, in the top 10 list, barring four stocks, the rest have been the most wanted throughout this phase.

The advantage with mid-caps is their size. They are not too big, nor too small, are fairly liquid and can easily step into the shoes of a largecap. Aditya Birla Nuvo, for instance, missed the most wanted list once only to find itself in the large-cap category because of its rising valuation. But it later settled back in the mid-cap space.

Because of their potential, mid-cap stocks generally have track records that makes it easier for analysts to assess the business potential and quality of management. Several of the top 10 mid-caps are leaders and dominant players in their specific business segments, including Crompton Greaves, Divis Labs and Tata Chemicals.

Again, we looked at how these stocks performed through the ups and downs. The result is a mixed bag. In half the stocks, you would have lost money if you would have stayed invested. However, some also had an astounding rise—Divis Lab would have appreciated 208% if you had kept it. In IVRCL Infrastructure & Projects, you would have lost 39%. But the spike in the fund portfolio is what these stocks are picked for, and if that has been achieved at a good strike rate, the fund manager should be given due credit for holding on to some winners.

Click here to Enlarge
Small-cap stocks account for less than 10% of the corpus of diversified equity funds. But they come with the potential to fire or peter out. If large-cap stocks are like Test matches, these are the T20s of investing in the markets. Hold them for too short a time or too long and you may regret in either situation. The exchanges are literally awash with thousands of small stocks, of which many exist only on paper and don’t comply with updating returns and developments either. Highly risky, these can be a disaster if you were to invest in them directly. For instance, the top 10 large-caps have an average market capitalisation of over Rs 50,000 crore. The average market cap of the top 10 small-caps is less than Rs 1,000 crore.

Only two of the 10 companies are present in the most wanted small-cap list through the cycle, an extremely risky indication that the stocks being volatile, illiquid and erratic. It also means that smallcaps need attention and by moving from one small-cap to another, there is potential to get the added spike in the portfolio. Barring two stocks, Ipca labs and Usha Martin, you would have lost on all stocks if you had not booked profits at appropriate moments in this cycle.

But this does not mean that these stocks are cheap or unattractive. Indraprastha Gas and Orient Paper, with an EPS of Rs 12.4 and Rs 10.6, respectively, in March 2008, are attractive enough to sit in a fund manager’s portfolio. These are definitely high-risk, high-return strategy players in a portfolio. A combination of winners can act as a cherry at the top of a portfolio. But a few bad picks could drag down the fund’s overall returns.

Can you bank on funds?