The recent spate of mergers, acquisitions and new partnerships in mutual funds has the investors worried about the fate of their hard-earned money.

>The great mutual fund crisis
>Changing fortunes of star funds
>Fear & loathing on MF street
>What should you do now?
>The new rules of the game

Marriages, they say, are made in heaven. Unfortunately, some of them end up on the rocks. This holds true for any partnership, including the one in mutual funds. This is the reason the recent spate of mergers and acquisitions in the MF space has the investors worried; they don’t want their investments to come to a naught. However, not all mutual fund partnerships are destined to fail, with some even working to the benefit of all. Franklin Templeton is a case in the point.

It acquired Kothari Pioneer to get a headstart in the MF arena in India, and along with the company, it got its crack team of Sukumar Rajah and K.N. Siva Subramanian. The investment philosophy of Kothari Pioneer and Franklin Templeton matched and the investors celebrated the union. Similar was the case when the HDFC Mutual Fund acquired Zurich MF and, along with it, its hotshot fund manager, Prashant Jain.

But there are times when the best-laid plans go wrong. Sahara bought the First India Mutual Fund, and the resultant entity has not proved very successful. Then there’s the complex history of the Principal group, which entered India in partnership with IDBI, bought IDBI’s stake, purchased Sun F&C, then partnered with Punjab National Bank, and has now decided to go solo. More time and effort has been spent on restructuring operations than on money management, much to the detriment of the investors.

Needless to say, the break-ups concern the investors. However, the fund houses are not stopping the process of mergers and acquisitions, which has actually gained momentum of late. The Standard Chartered AMC was sold for Rs 820 crore to the financial services company IDFC in March 2008, setting a new benchmark in the asset management space. The deal was a winner for StanChart considering the price and the fact that it got to retain its distribution network through which it continues to sell mutual funds. For IDFC, the reasons to buy an existing fund house were to get a headstart and the low cost of starting operations. With Rs 14,000 crore in AUM, StanChart was a medium-sized fund house. 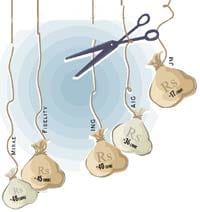 Last month, Lotus India MF was bought by Religare (price details not yet out, as the deal is awaiting Sebi approval). While StanChart benefited from the sale by booking profits at the peak of valuations, Lotus suffered a near distress sale, owing to pressures by sponsors to exit a business where it was finding its liabilities rising by the day. However, both the acquisitions were for the same reason—the buyers wanted an entry in the mutual fund space.

When a fund is bought or taken over, should the investors worry? R. Swaminathan, head, institutional business, IDBI Capital, says, “Mergers and acquisitions depend on what the parties involved are looking for. Investors need to be cautious about how their investments will fare in the new entity.” This year has already seen the entrance of five new players in the MF arena, and many more are waiting for the necessary clearances to purchase an existing fund house.

Money Today explored the operative benchmark of fund houses— their profitability—to understand how well the money managers were managing their own turf. The results are rather poor. Of the dozen annual reports we accessed, more than half are making losses (see ‘Fall from Grace’). Many of the older fund houses are not as profitable as one would expect; the oldest fund house, UTI, has close to Rs 200 crore as profit, Reliance has Rs 145 crore, and SBI makes Rs 45 crore.

Any industry needs mergers and acquisitions to help it grow and consolidate. “Such developments are mostly driven by the business model that an AMC follows and what they see for themselves in this business,” says Prasunjit Mukherjee, CEO, Plexus Management Services. For instance, Religare has bought Lotus as it gives it ready access to a market where Lotus had 38 branches and was servicing over 1.5 lakh customers.

How have the past changes impacted the industry and the investors? Franklin Templeton, HDFC and Birla Sun Life are three players that had gobbled up players like Kothari Pioneer, Zurich and Alliance Capital (see ‘Mergers and Acquisitions’). All three had reasons to add the existing names— they were looking at growth. Today they are among the top funds, not only in terms of managing assets, but also in performance. There have also been smaller takeovers; Principal MF bought out Sun F&C’s schemes, Canbank MF took over GIC MF, Taurus took over Libra Mutual Fund and Indbank MF sold out to the Tatas. All these were relatively minor sales, especially when you look at deals like the StanChart sale.

WHAT SHOULD YOU DO?
As an investor in a fund house that has been acquired, you should be aware of what the new development will mean for you. “However, mindlessly selling out of a fund because the AMC is being acquired is uncalled for panic,” says Mukherjee. It’s something R.K. Gupta, managing director, Taurus Mutual Fund, knows. “When we merged Libra Mutual Fund with us, there were huge redemptions by the Libra fundholders,” he says. Such a move can actually dent the larger interest of the new entity. After all, economies of scale and lower operating costs mean the expense ratio of your fund is lower, and hence, your returns are better.

There are also other issues that crop up at such times, especially if the acquirer has already got a suite of products. In such cases, funds are merged and the merger is treated as a redemption of old units and fresh purchase of new units. You may incur a capital gains tax, but it is a problem where you do not have a choice. Regardless of whether you opt for the merger or not, you have to face the tax implication.

Also, note whether there are any significant changes in the cost involved. For instance, when Franklin Templeton merged two of its schemes, it was met with protests from some quarters. The main criticism was that there was a 50 basis point gap between the expense ratios of both the funds. Some investors rightfully felt that they were moving into a high-cost fund. Industry watchers say that consolidation is inevitable as small players struggle to cope in an increasingly competitive and crisis-ridden market.

The thin margins and low investor base will make it difficult for the smaller players to survive. The market is rife with rumours about more takeovers and mergers, and there are new fund houses queuing up for even a small share of the market.

If they can’t make it on their own, there is always the option of the big fish swallowing the small ones. Just make sure that your investment is not eaten up as well.

What should you do now?