In the age of seamless markets it would be puerile to lay all the blame on the finance minister’s door. But his budget could have provided fresh triggers for the markets to rally around.

On 28 February, the Indian markets were looking at Finance Minister P.Chidambaram togive them some relief in the short term, and a vision for the long term. Sadly, Chidambaram failed to deliver on either front.

On Tuesday, 27 February markets across Asia tanked on fears of economic slowdown and overvaluation. The domino effect hit European markets and the US followed.

On Wednesday, the Sensex took its cues from the Dow Jones index and slid 540 points to 12938—the highest loss on a Budget day.

There were no great expectations from the budget to begin with. Ever since Chidambaram announced a cut in customs duty on cement and steel in January, it was evident that the budget would be an anti-inflation affair.

With this background, it was easy to appreciate the budget proposals that were tailored to hit inflation like a guided missile.Wheat and rice were taken off the futures trading mart, effectively putting a curb on their ability to influence the price in the spot market.

The reduction in excise duty from 65% to 50% in sunflower oil, which constitutes 8% of our edible oil pool, and the removal of 4% countervailing duty on all edible oils will go a long way in mitigating the inflation woes.

The reduction in excise duty on motor fuel by 2% would have also directly added to the combined effort to fight inflation, but for the clarification from the Petroleum Ministry that says it won’t pass on the benefit to the consumer. 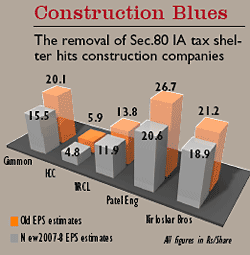 The concept of reverse mortgage is Chidambaram’s gift to the elderly to lead a respected, retired life and not be dependent on the crumbs of their progeny.

A new levy in the form of 1% education cess will pinch corporate India and so will the rise in dividend distribution tax from 12.5% to 15%. For money market mutual funds, dividend declaration tax will now be 25%, which is very harsh.

The allowing of short-selling by institutions is some thing which is welcome, but I am not biting this one, as I would like to see the current derivatives being settled by delivery first. The mechanism to allow borrowing and lending of securities will have to be put in place first. And that is unlikely to happen immediately. This is more of a statement of intent in the same vein as his desire to make Mumbai the financial capital of the world. From the capital markets point of view, what has not been done is more  important. The finance minister has left the securities transaction tax and short-term capital gains tax intact. He has also not brought any pressure to reduce the use of participatory notes by foreign institutional investors. The FM has essentially given a permit for the party to continue for one more year.

The non-capital marketrelated provisions of the finance bill, however, would take a heavy toll of the markets. Cement has been singled out for a special treatment. Seen as a culprit of fanning inflation, the industry has been given both carrot and a stick.

The excise would be lower by Rs 50 per tonne from the existing Rs 400 if the maximum retail price per bag is Rs 190 or lower. If the price is higher, they will have to pay an excise of Rs 600 a tonne. Essentially, the increased excise would mean a burden of Rs 10 per bag.

This will eat into the margins of the manufacturers. But if they pass on the increased price to the customer, their margins remain intact, but they may invite the wrath of the government.

The IT sector will be virtually on the MAT, pun intended. Besides the service tax on rentals will also take its toll on the sector as they straddle a lot of space. These two hits alone can make the larger IT stocks take a hit of between Rs 2 and Rs 6 in their EPS and the smaller ones, slightly more.

The clarification that the benefits of the Section 80 IA are not applicable to the contractors and construction companies who execute work for others comes with retrospective effect.

This could mean larger trouble for the sector. The power to make laws that come with a retrospective effect, should only be exercised in extreme cases. It makes a mockery of the whole process of planning. The above provisions coupled with the service tax on lease rentals for commercial properties are likely to result in a downgrading of earnings for the first time since 2001. This is not something that the markets would like. Chidambaram should not be blamed for the sell-off we have seen in the markets. The rise in Japanese interest rates has triggered a sell-off in the world markets. Inflation and rising interest rates are a global phenomenon.

The electoral setbacks in Punjab and Uttaranchal and rising inflation will force the Left to publicly distance itself from the Congress and lend only issue-based support. In other words it means an end to the aspirations of second-generation reforms. Add to that the attitude of confrontation taken by the cement industry and top it with earning downgrades and you have the avalanche ready to tip any moment.

It may be time to cut equity exposure and move some money to the fixed-income instruments.

It pays to be a copy cat