The rift between the Ambani brothers and the possibility of a patch-up have affected the prices of the shares in the two Reliance groups. 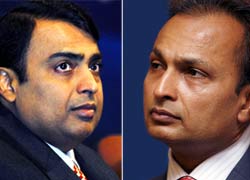 The rift between the Ambani brothers and the possibility of a patch-up have affected the prices of the shares in the two Reliance groups. We examine the differences between Mukesh and Anil, the circumstances in which the brothers could reunite and the likely impact of such a unification on their businesses and on the stock prices of the two Reliance packs.

A few days before 24 February, the birthday of Kokilaben, the mother of Mukesh and Anil Ambani, there was hectic trading in the stocks of the Reliance pack. This was nothing unusual as the counters of the Reliance Group—divided between the two brothers in June 2005 after an intense public battle and which comprise large-caps such as Reliance Industries (owned by Mukesh) and Reliance Power (Anil)—have millions of shareholders and witness huge volumes. This time it was different.

There was speculation among investors that the two brothers, whose companies together contribute 3% to India’s GDP, had decided to bury the hatchet and smoke the peace pipe. In fact, the media reported that the Ambani clan would announce the patch-up when the brothers met at Kokilaben’s residence. Investors were palpably excited since such a move would help them immensely; the stocks of the Reliance pack would certainly go up, thanks to the commercial synergies and other benefits accruing in the future.

Alas, it didn’t happen. But it left investors with an afterthought. What if? They thought about the possible scenarios if the two brothers were to shake hands. “The recession could be one reason to bring them together. This is definitely a good time for the Ambani brothers to reunite,” says M.K. Swaminath, ITPF chairman. Adds Som Mittal, chairman, Nasscom: “Considering the current economic and business climate, there is a real possibility of them coming together.” Other market observers believe that the probability of a truce is remote. “The situation is hypothetical and can only happen in a fiction movie,” says Nexgen Capital’s equity head, Jagannadham Thunguntla.

Still, as almost every investor household holds some shares of the Reliance Group, it seems like a good exercise to analyse what is likely to happen if the two brothers were to join hands yet again. It will also help you to understand whether you should hold on to these shares, buy more from the market, or sell if the rumours turn into a possibility. More importantly, the move can provide a much-needed boost to flailing market sentiments at a time when the Sensex has lost almost 60% in the past 14 months. 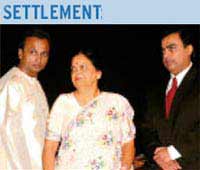 Click here to Enlarge
Impact on valuations
Each time there has been news, either of the beginning and intensification of a battle between Mukesh and Anil, or a settlement between the two, the Reliance pack has gyrated wildly (see charts). After Mukesh publicly disclosed on 18 November 2004 that there were “ownership issues” with Anil, RIL, then the flagship company of the group and today the largest within the split group, went into a tailspin, falling 10% within the next 30 days.

Similarly, after the announcement of a settlement between the brothers on 18 June 2005, the Sensex crossed the 7,000 mark on 20 June. Reliance Energy (now Reliance Infrastructure and owned by Anil) was the biggest gainer; even RIL closed at its then all-time high of Rs 630.40. On 21 November 2008, a day after the Ambani brothers shook hands at a meeting of top industrialists called by BJP leader Lal Krishna Advani, investors rushed to buy shares of the companies belonging to the Reliance Group, pushing the various scrips higher by 4-14%.

Therefore, it is a no-brainer to assume that there will be an upswing in the Reliance pack if the two brothers decide to bury their differences. This will prove to be a delight for investors, who have seen the combined market capitalisation of the split Reliance Groups tumble from a high of over Rs 8,00,000 crore in 2007 to just over Rs 3,00,000 crore. In fact, the two brothers’ dream of individually becoming the richest man on earth—Mukesh did become the richest man for a few days in 2007—has vanished.